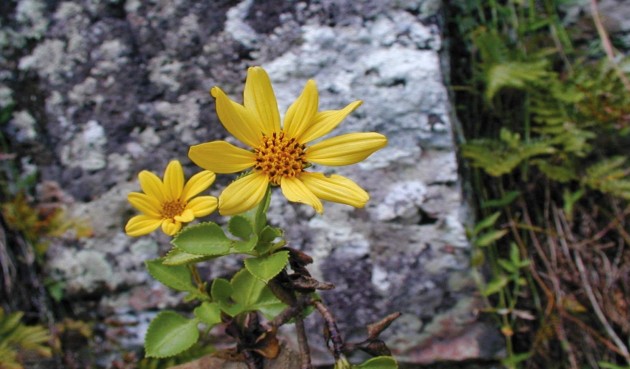 A close-up of the newly discovered flowering plant “Bidens meyeri.”

What plant species has just been discovered but is almost gone?

This new species was introduced to science and the public last October in the journal PhytoKeys by National Museum of Natural History botanist Vicki Funk and her collaborator, Kenneth Wood from the National Tropical Botanical Garden in Hawaii. Bidens meyeri grows exclusively on the steep, windswept volcanic cliffs of Rapa. The flower, distinguished by its soft, veiny yellow petals, is named after conservation biologist Jean-Yves Meyer of Tahiti, in part in recognition of his efforts in exploring and conserving the unique biota of Rapa.

Rapa is what botanists call an ‘anomalous district,’ meaning it has an unusually vast amount of biodiversity but the origin of the diversity is confusing. According to the Smithsonian’s Funk, her co-discovery of Bidens meyeri, “represents the end of a long line of Bidens species that have island hopped their way from western North America to Hawaii to the Marquesas to the Society Islands and ended up on the cliffs of Rapa in the Austral Islands.” 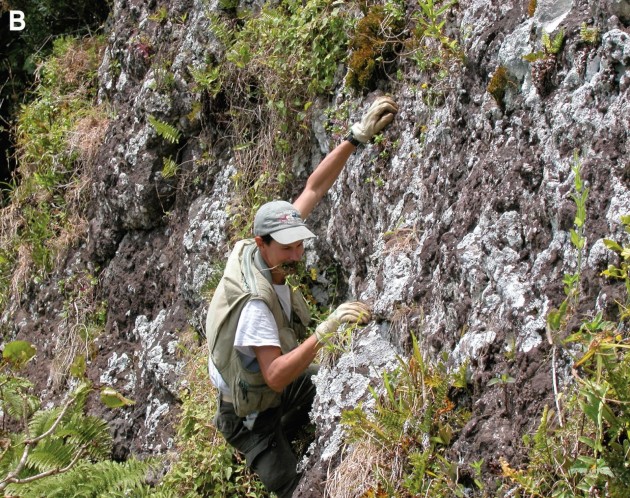 Conservation biologist Jean-Yves Meyer climbing a volcanic cliff with a specimen of “Bidens meyeri” in his teeth. This plant is known from only a few specimens found on this cliff on the South Pacific island of Rapa. The plant was named in Meyer’s honor.

But Bidens meyeri’s beauty may not last long. It is regarded as critically endangered and faces a very high risk of extinction in the wild. The reason for this is unconfirmed, but scientists point to several potential factors that contribute to the flower’s endangered existence: climate change, possible fires, destruction by feral goats introduced to the island by humans and competition with invasive plants. This botanical beauty is most closely related to the plant species Bidens saint-johniana from nearby Marotiri Island, although it is generally smaller.

Like many new discoveries, finding Bidens meyeri was unexpected. Several scientists visited Rapa for a month to take a botanic survey of the island. Due to a logistical traveling complication (the return boat sank), many of the scientists stayed in Rapa longer than anticipated. Scientists discovered several new species during their extended time on the island, including the colorful and cliff-dwelling Bidens meyeri.