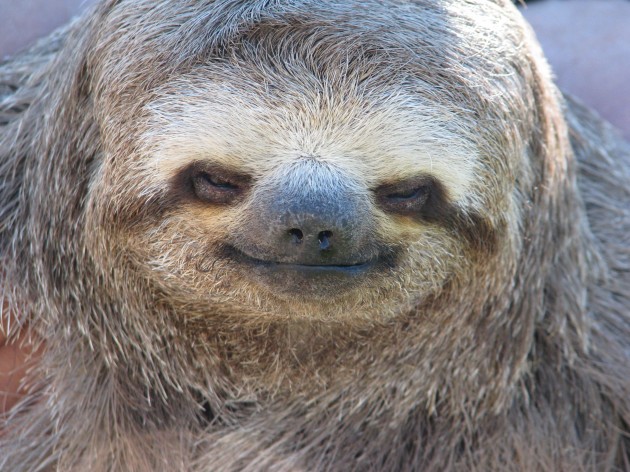 Here at Smithsonian Science we are celebrating Sloth Week with four little-known facts about sloths, some of which we found in the Smithsonian’s very own collections!

1. The Smithsonian has a collection of fossilized sloth poop

What do you keep in your drawers? If you pull open a drawer at the Smithsonian’s National Museum of Natural History, don’t be surprised if you find fossilized sloth poop. This poop, or coprolite as it is scientifically known, is from an extinct species called the Shasta ground sloth, Nothrotherium shastense. It was found in Rampart (Sloth) Cave in Arizona, and is estimated to be 10,400 years old. Scientists have used this dried excrement to analyze not only the diet of these extinct animals but also the ancient parasites they carried. 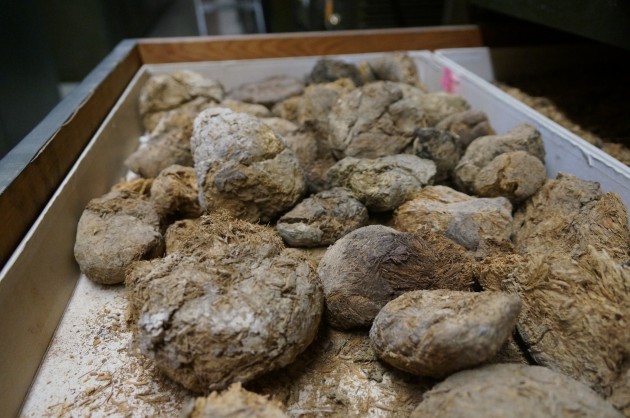 Fossilized excrement from the Shasta ground sloth, “Nothrotherium shastense,” in the collection of the Smithsonian’s National Museum of Natural History. (Photo by Micaela Jemison)

“DNA from the parasites we find in the sloth poop can tell us many things,” explains David Bohaska, from the museum’s Paleobiology Department. “Some researchers have used it to look for viruses or bacteria carried by the parasites in an attempt to see if there is a link between disease and mass extinctions in the past.”

2. Sloths once lived in the sea

A prehistoric aquatic sloth in a swimming pose. (Illustration by Carl Buell)

Aquatic sloths did exist! These animals were quite different from the sloths alive today that hang and climb around in the high rainforest canopy. Aquatic sloths, as their name suggests, spent the majority of their time in the sea, swimming and diving to eat sea grasses or algae. They lived 4 to 9 million years ago along the coasts of Chile and Peru, where the coastal landscape borders or adjoins a vast desert with little vegetation, likely forcing the sloths to adapt to a diet from the ocean.

“Recent studies have shown that these sloths were developing increased bone density in their ribs,” explains Jorge Velez-Juarbe, curator of Marine Mammals at the Natural History Museum of Los Angeles. “This extra density or weight could have helped them in their aquatic lifestyle by allowing them to dive down much easier to reach their aquatic foods.” Although aquatic sloths are extinct today, their modern relatives have retained their swimming ability. Their weak hind legs and long claws, while well adapted for life hanging in the trees, makes movement on land difficult. But once they are in the water, sloths are surprisingly good swimmers, able to stroke efficiently with their long arms. 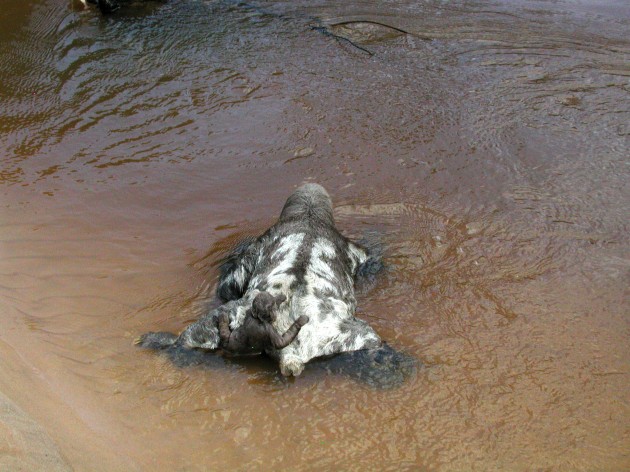 As its mother enters the water, this young three toed sloth knows to crawl onto her back. This sloth species is known as “Bradypus variegatus.” (Photo by Louise Emmons)

Could you imagine facing off with a 23-foot-tall giant sloth? Our early ancestors may have done just that. Learn more about how this meeting may have occurred with Kirk Johnson, Sant Director of the Smithsonian’s National Museum of Natural History, in the video below.

4. Thomas Jefferson was involved in the discovery of an extinct sloth species

President Thomas Jefferson was widely known to have had a keen interest in fossils, and regularly received fossils from friends and acquaintances. One such gift, from Col. John Stuart of Greenbier County, Virginia (now West Virginia), was a fossil excavated from Cromer Cave in 1796. He described it to Jefferson as “..bones of a tremendous animal of the clawed kind lately found…might afford you some amusement.”

Jefferson studied the bones and drafted a scientific paper to be submitted to the American Philosophical Society. He reached the conclusion that the bones were from an animal “of the lion kind, but of most exaggerated size,” which he called “the Great-claw or Megalonyx.”

Jefferson was waiting on one last piece, the thighbone, to be sent to him to confirm his conclusions on its size, when he was elected to two important offices: vice president of the United States under John Adams, and president of the American Philosophical Society. With his induction as Society president approaching, Jefferson was forced to complete his paper without the thighbone on his 1797 journey to Philadelphia, during which he carried the fossils with him.

A matter of fate or luck however led Jefferson to reconsider his conclusions sometime after his arrival. He realized that his classification of the fossils as part of the cat family was probably wrong, when he came across an engraving of a strikingly similar fossilized skeleton in an issue of London’s Monthly Magazine. The skeleton was identified as a relative of the sloth and so Jefferson quickly revised his paper on the day of his presentation to the American Philosophical Society, deleting all references to a cat family connection.

In 1804 Jefferson was credited as the discoverer of the Megalonyx genus, an animal that is indeed related to the sloth family, and in 1822 the French naturalist Anselme Desmarest gave the extinct animal its formal name: Magalonyx jeffersonii. Jefferson’s ground sloth lived 150,000 to 10,000 years ago and is now the official state fossil of West Virginia.