For more than a half-century, a six-foot tall granite cube and obelisk with a 150 to 200 pound marble slab insert marked the grave of Thomas Jefferson at Monticello. Following damage to the original monument and a government campaign to replace it, the original tombstone, including the marble slab, was presented to the University of Missouri, located in Columbia, Mo. 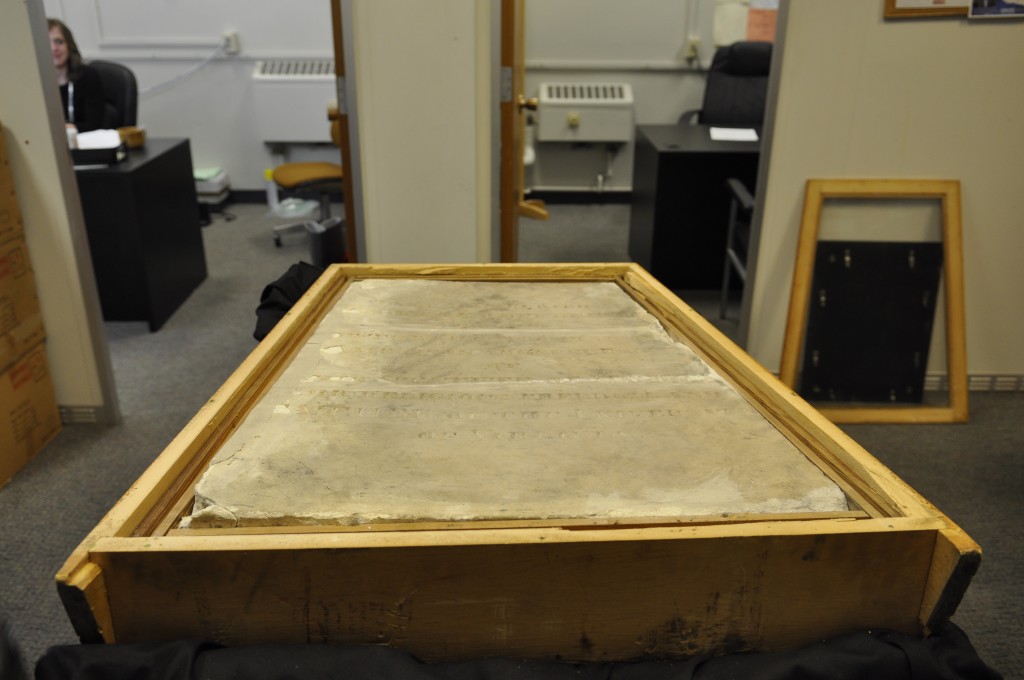 Thomas Jefferson’s original grave marker. The marker, which has been stored at Missouri University for the past 130 years, will be restored by the Smithsonian Museum Conservation Institute.

The tombstone was officially dedicated at Missouri University on July 4, 1885, and the marble slab was stored in the university’s Academic Hall until the building burned in 1892. The marble slab has been in the current administrative building, Jesse Hall, since it opened in 1895.

Jefferson wrote a detailed description of his grave marker as well as the inscription.

“It’s irresistible. Thomas Jefferson himself wrote what he wanted written on the stone. Scholars find it interesting that he left out the fact that he was president, among other accomplishments,” said Carol Grissom, senior objects conservator at the Museum Conservation Institute, a conservation research laboratory that serves the entire Smithsonian. Grissom is leading the restoration project

“Could the dead feel any interest in Monuments (sic) or other remembrances of them,” Jefferson wrote. He continued, saying that he would prefer a “plain die or cube . . . surmounted by an Obelisk. (sic)”

Jefferson also dictated the words on the marble slab:

Author of the Declaration of American Independence

Of the Statute of Virginia for religious freedom

& Father of the University of Virginia

“Jefferson was a major proponent of public higher education,” said Kee Groshong, vice chancellor for administrative services emeritus. “The university made a case to his family that this would be an ideal place to display his original grave marker. We believe we should take care of it and display it for everyone to see and enjoy because it is a very interesting piece of history.”

Once at the Smithsonian Museum Conservation Institute, Grissom and her team will remove the plaque from a wooden box that it has been stored in since the 1890s. The restoration team will analyze the piece first to determine exactly why the stone is deteriorating. Grissom said that the top 1/8 inch of the plaque is separating in places and the corners seem to be disintegrating.

“We will examine some samples using the scanning electron microscope and conduct other analyses,” Grissom said. “We also know that the stone was previously broken, so we might try to take it apart first to get a better look at the internal damage. We’re also interested to identify where the stone came from — was it something that was imported, domestic or local? The information is historically significant, but it could also affect the treatment of the stone.”

It is anticipated that the project will take at least a year to complete. Following the restoration, the stone will be returned to Missouri University, where it will be displayed permanently.