By simulating the environment when corn was first exploited by people and then domesticated, Smithsonian scientists discovered that corn’s ancestor; a wild grass called teosinte, may have looked more like corn then than it does today. The fact that it looked more like corn under past conditions may help to explain how teosinte came to be selected by early farmers who turned it into one of the most important staple crops in the world.

The vegetative and flowering structures of modern teosinte are very different from those of corn. These and other differences led to a century-long dispute as to whether teosinte could really be the ancestor of corn. 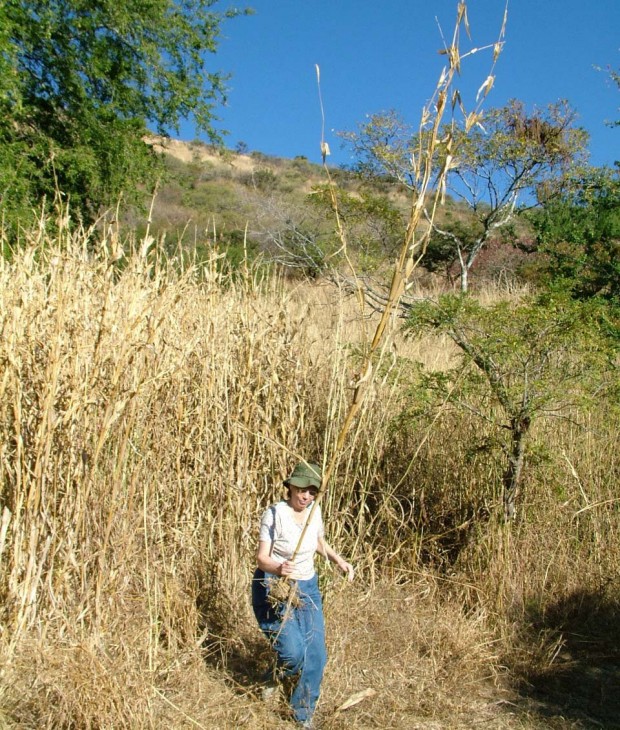 But new findings reported in the journal Quaternary International show that teosinte may have looked very different in the past. “We grew teosinte in the conditions that it encountered 10,000 years ago during the early Holocene period: temperatures 2–3 degrees Celsius cooler than today’s with atmospheric carbon dioxide levels at around 260 parts per million,” said Dolores Piperno, senior scientist and curator of archaeobotany and South American archaeology at the Smithsonian’s National Museum of Natural History and the Smithsonian Tropical Research Institute, who led the project. “Intriguingly, the teosinte plants grown under past conditions exhibit characteristics more like corn; a single main stem topped by a single tassle, a few, very short branches tipped by female ears and synchronous seed maturation.

After the Industrial Revolution, carbon dioxide rose to today’s 405 parts per million, the level in the control chamber where teosinte plants look like plants in the wild today—tall, with many long branches tipped by tassels and seed maturation taking place over a period of a few months. Co-author Klaus Winter usually studies the effects of rising atmospheric carbon dioxide levels on tropical plants as a senior staff scientist at STRI. Piperno and Winter devised a scheme to essentially travel back in time by comparing plants grown in modern conditions with plants grown in the early Holocene chamber. 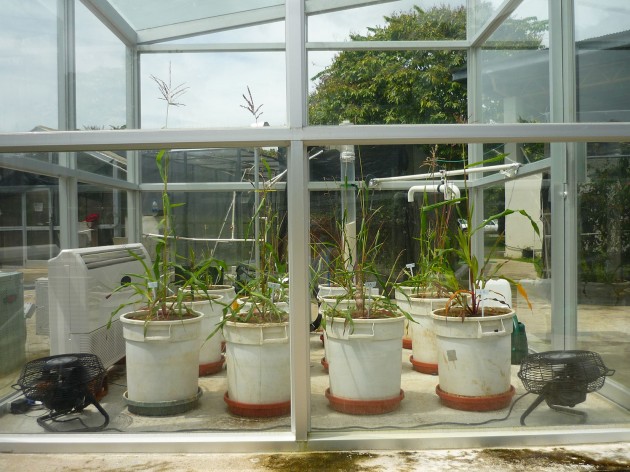 A view of teosinte in a growth chamber—late glacial conditions. (Photo by Irene Holst, STRI)

“Now it appears to be an open question when in the Holocene teosinte became the plant very distinctive from maize in vegetative architecture and inflorescence sexuality that we see today and use as the baseline for research on maize domestication,” said Piperno. “When humans first began to cultivate teosinte about 10,000 years ago, it was probably more maize-like—naturally exhibiting some characteristics previously thought to result from human selection and domestication. The environment may have played a significant, if serendipitous, role in the transition through inducing phenotypic plasticity that gave early farmers a head start.”

Phenotypic plasticity is an organism’s ability to change in response to the environment, causing genetically identical organisms to look very different when they live in different conditions. As they formulate a “new modern evolutionary synthesis,” in part with concepts that Darwin could not have known of, evolutionary biologists continue to debate the importance of the environment and plasticity on evolutionary change and the origins of the diverse forms of life on Earth today. However, new evidence shows that these environmental–phenotypic interactions are in a growing number of organisms. This is one of the first studies to examine the influence of these processes on plant domestication.