Hot spots of mercury pollution in aquatic sediments and soils can contaminate local food webs and threaten ecosystems, but cleaning them up can be expensive and destructive. Researchers from the Smithsonian Environmental Research Center and University of Maryland, Baltimore County have found a new low-cost, nonhazardous way to reduce the risk of exposure: using charcoal to trap it in the soil. 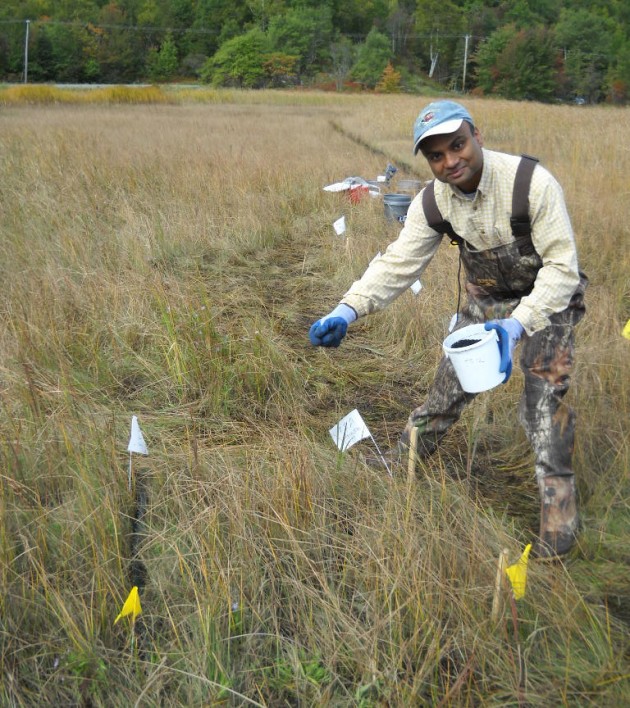 Researcher Upal Ghosh spreads SediMite, a mixture containing activated carbon, onto a marsh. An activated carbon mixture, like this one, can make mercury stick to it instead of seeping into water or the food web. The alternative—digging up the soil—could devastate the ecosystem. (Photo by Cynthia Gilmour, SERC)

Mercury-contaminated “Superfund sites” contain some of the highest levels of mercury pollution in the U.S., a legacy of the many industrial uses of liquid mercury. But despite the threat, there are few available technologies to decrease the risk, short of digging up the sediments and burying them in landfills—an expensive process that can cause significant ecological damage.

In a new study published in the journal Environmental Science & Technology, Cynthia Gilmour (SERC), Upal Ghosh (UMBC) and their colleagues show that adding activated carbon, a form of charcoal processed to increase its ability to bind chemicals, can significantly reduce mercury exposure in these highly contaminated sites. With funding and support from several industry and federal partners, the team tested the technology in the laboratory with mercury-contaminated sediments from four locations: a river, a freshwater lake and two brackish creeks. To reduce the harm from mercury, the sorbents also had to decrease the amount of methylmercury taken up by worms.

“Methylmercury is more toxic and more easily passed up food webs than inorganic mercury,” said Gilmour, the lead author on the study. “Unfortunately, methylmercury is produced from mercury contamination by natural bacteria. To make contaminated sites safe again, we need to reduce the amount of methylmercury that gets into animals.” 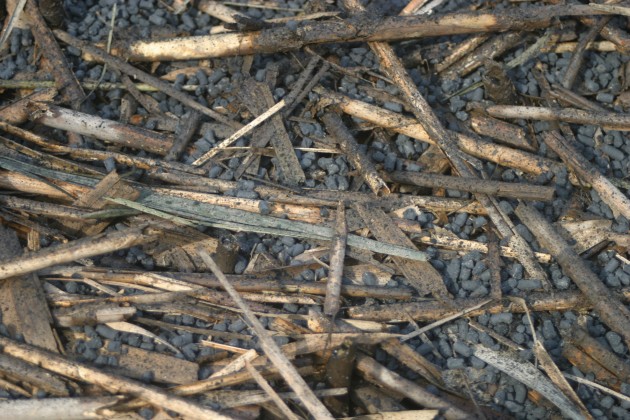 Carbon pellets sprinkled on the surface of a mercury contaminated marsh binds to inorganic mercury in the soil and significantly reduces the amount of methylmercury produced by natural bacteria. (Photo by Upal Ghosh)

Added at only 5 percent of the mass of surface sediments, activated carbon reduced methylmercury uptake by sediment-dwelling worms by up to 90 percent. “This technology provides a new approach for remediation of mercury-contaminated soils—one that minimizes damage to contaminated ecosystems, and may significantly reduce costs relative to digging or dredging,” said Ghosh, co-author on the study. Activated carbon can be spread on the surface of a contaminated sediment or soil, without physical disturbance, and left in place to mix into the sediment surface. Called “in-situ remediation,” the use of sorbents like activated carbon has been proven to reduce the uptake of several other toxic pollutants. However, this is the first time activated carbon had been tested for mercury-contaminated soils.

The research group is now testing its effectiveness in the field at several Superfund sites across the country. If successful in the field, this approach of treating soil with activated carbon may be able to reduce the risk of mercury exposure in polluted sites and subsequent contamination of food webs. –Kristen Minogue, Smithsonian Environmental Research Center

Ecosystems on the Edge: Tracking Mercury