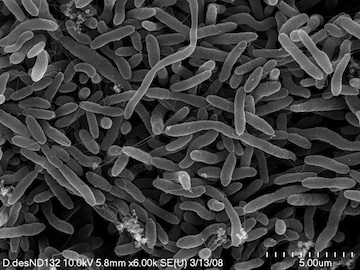 A new bacterial genome sequenced by a team led by the Department of Energy’s Oak Ridge National Laboratory could help researchers solve a mystery as to how microorganisms produce a highly toxic form of mercury.

Methylmercury, a potent human and animal neurotoxin, appears in the environment when certain naturally occurring bacteria transform inorganic mercury into its more toxic cousin. Few bacterial species are capable of this conversion, and exactly how the transformation takes place has been a matter of debate for decades. Methylmercury sticks to proteins in living organisms and accumulates in the food chain.

“What is not known are the genes or the proteins that allow these bacteria to mediate the transformation,” said ORNL’s Steven Brown, who led a research team to sequence the genome of a bacterium in the Desulfovibrio genus that is capable of methylating mercury.

The new genome, sequenced at the California-based DOE Joint Genome Institute, and completed at Oak Ridge National Laboratory, was published in the Journal of Bacteriology. It lays the foundation for future research to examine the little understood mechanisms behind the production of methylmercury.

“We know a little about the bacteria that produce methylmercury but we don’t know the mechanism by which they produce it,” adds Cynthia Gilmour, co-author of the study and senior scientist at the Smithsonian Environmental Research Center in Edgewater, Md. “We are going to compare this genome with the genome of non-methylmercury producing bacteria, see what genes are different and try and figure out the mechanism.”

Desulfovibrio desulfuricans strain ND132 is an organism that thrives in sediments and marsh soils without oxygen – the places in lakes, streams and wetlands where mercury contamination is converted to methylmercury. It is representative of a group of organisms that “breathe” sulfate instead of oxygen and are largely responsible for mercury methylation in nature.

“This is the very first genome that we have for a bacteria that makes methylmercury,” says Gilmour, who isolated the bacteria strain from Chesapeake Bay sediments 25 years ago and has kept it as culture in her laboratory ever since.