Marmosets on track for obesity appeared to be more efficient in their feeding behavior. “Although all animals consumed the same amount of liquid, the ones taking in more on each lick were the ones that later became obese,” said Corinna Ross, lead author of one of two new research articles published in the journal Obesity. 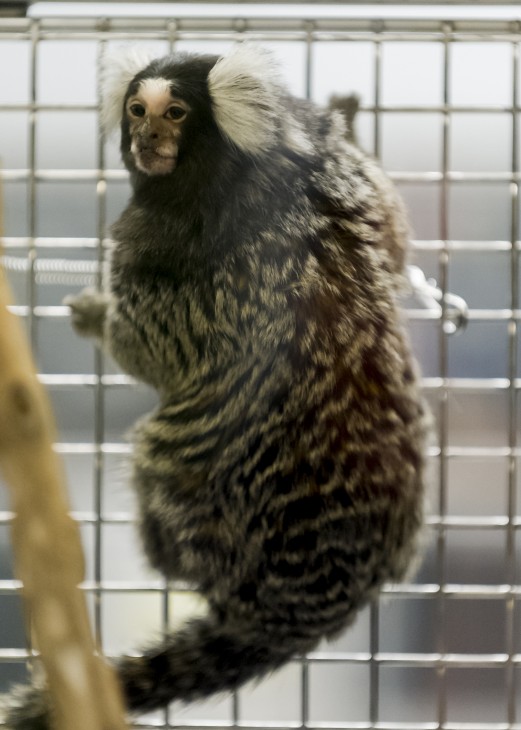 An obese marmoset. (Photos taken at the Barshop Institute for Longevity and Aging Studies, The University of Texas Health Science Center at San Antonio, by Lester Rosebrock)

“For marmosets that are getting fat at a fairly early age, their pancreases basically have to work extra hard putting out higher levels of insulin to achieve normal levels of stability in glucose in the blood,” Power explains.“By the time they are one year old they are showing great signs of insulin resistance.”

The studies were conducted at the Southwest National Primate Research Center in San Antonio.

In previous research, Power and Suzette Tardif, associate professor of cellular and structural biology in the School of Medicine, found that obesity patterns begin just 30 days after birth in the marmosets. A 30-day-old marmoset infant is the equivalent of a 5- to 8-month-old human infant. At 6 months of age, a marmoset is as old as a juvenile child before puberty. At a year old, the small non-human primate is the equivalent in age of a human adolescent.

Animals that eventually became obese, Power says, as infants appeared to be slightly more developmentally advanced. “They have several developmental behaviors that seem to occur at a slightly earlier age: they seem to be a little more independent, they are trying to get solid food on their own and they are off [not being held by] a father, brother or sister [normal among marmoset infants] earlier. They basically seem to be going through each stage of life three, four, five days earlier than the infants that end up being a normal size.” 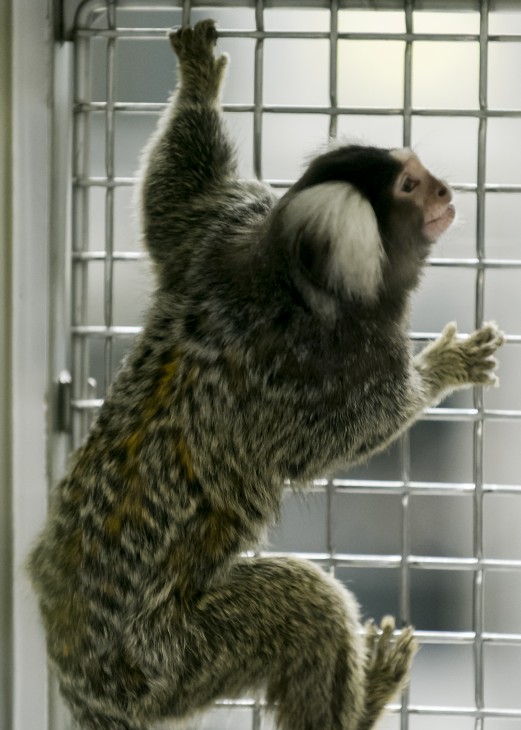 Marmosets have significantly less body fat than humans, but in the marmoset it takes considerably less fat to generate metabolic dysfunction.  Animals that are going to be normal weight gain lean mass, such as muscle, at a faster rate than they gain body fat. “That’s true for human children, as well,” Tardif says. But marmosets that became obese gained both fat mass and lean mass faster than their normal-weight counterparts. This meant that the obese animals’ percentage of body fat grew during infancy and adolescence.

Being obese requires a lot more work for the pancreas, which has to produce a lot more insulin to maintain homeostasis, Power explains. “To a certain extent any mammal that lives long enough will become diabetic, because eventually their pancreas is going to give out.  Marmosets usually become diabetic at 11, 12, 13 years of age. Obese marmosets, we predict, will become diabetic at five, six or seven years of age, because their pancreases must work extra hard, continually running at a high rate. It becomes old earlier relative to the rest of the body.”

Obesity is a condition that is never seen among wild marmosets, Power says. “Even in the best season with plenty of food there is too much activity going on,” for wild animals to get obese.

And rising obesity is a strange thing happening in our captive colonies, Power continues. “In the 1990s we started a colony that eventually became the one we are studying now, and we had nothing but lean animals then. And they were on the same diets as they are today. Now it’s almost like a ceiling has been removed. Now we’re seeing fat animals where before it was very rare to see a fat animal. Now it’s becoming more common. Obesity is creeping in and it is not very clear where this change has come from.”

Overall, “the marmoset serves as a good model for looking at what happens in human beings,” Power says. “It’s a little surprising however, as to how rapidly obesity is occurring and how significant those changes were.”

Is obesity predestined at infancy? Marmoset study may help scientists find out.