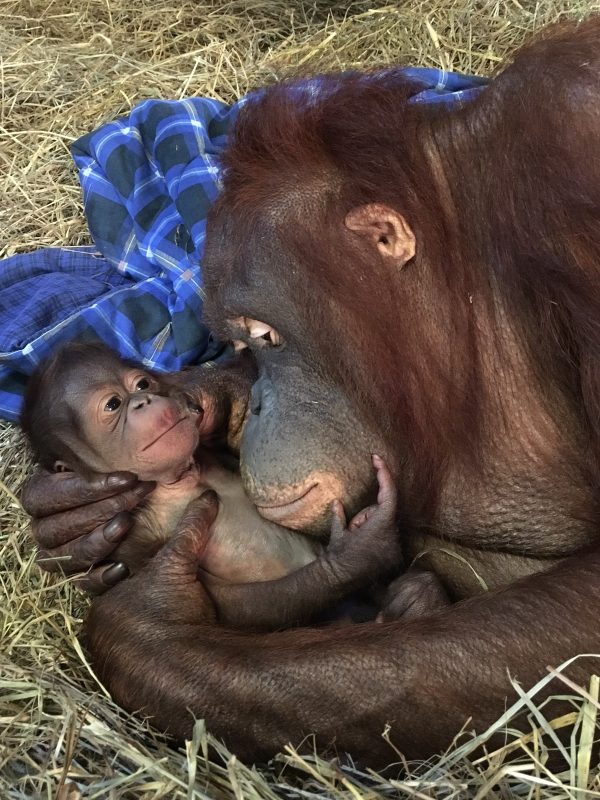 For the first time in 25 years, primate staff at the Smithsonian’s National Zoo are celebrating the birth of a male Bornean orangutan. He was born at 8:52 p.m. Sept. 12. Both 19 years old, female Batang and male Kyle bred in January following a breeding recommendation from the Association of Zoos and Aquariums’ Species Survival Plan (SSP). Primate staff have confirmed the newborn is a male. Animal care staff have observed Batang nursing the infant who has been clinging closely to his mother, and they are cautiously optimistic that the newborn will thrive. The Great Ape House will remain closed to provide Batang a quiet space to bond with her infant.

Animal care staff believe that Batang had successfully conceived Feb. 2, based on a human pregnancy test. They confirmed pregnancy with a subsequent ultrasound. The Zoo announced Batang’s pregnancy June 14 through a Facebook Live broadcast of one of her ultrasounds. Over the past 12 weeks, the Zoo has provided weekly updates on Batang on Facebook, Twitter and Instagram using the hashtag #OrangutanStory and will continue to share behind-the-scenes photos and videos as news breaks. 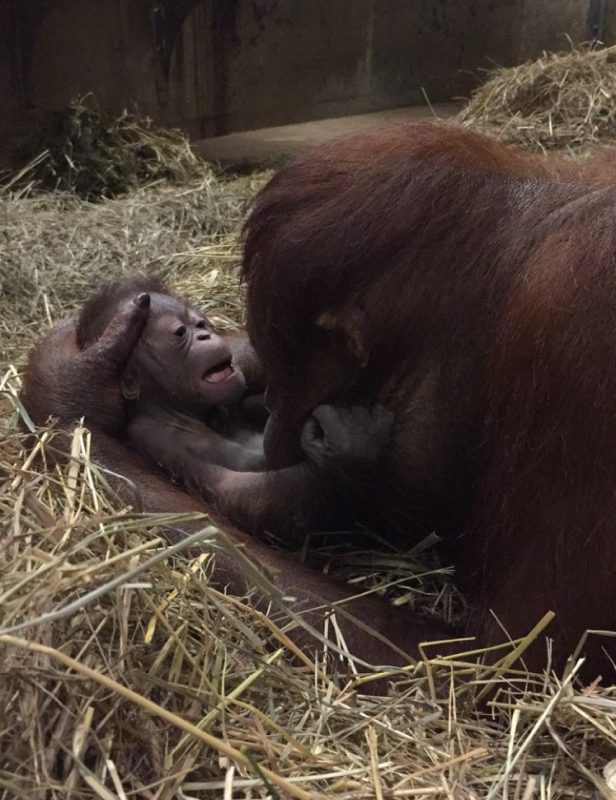 Batang and her infant in the Great Ape House at the Smithsonian’s National Zoo. (Photo by Amanda Bania)

“Each and every birth of a critically endangered species is significant, but it is all the more exciting and this is a historic moment for our Smithsonian’s National Zoo,” said Meredith Bastian, curator of primates and member of the Orangutan SSP Steering Committee. “I am very proud of Batang and my team. Ever since we received the breeding recommendation, they have dedicated themselves to preparing Batang for motherhood. I look forward to watching the infant experience everything for the first time—especially meeting the other orangutans and going outside for the first time with Batang.”

For the past three years, keepers have been acclimating Batang to the experiences of motherhood and training her to care for an infant. Building upon behaviors Batang has learned through routine training sessions, keepers have trained Batang to hold a baby upright, present it to keepers for bottle feedings and place the baby in a specially designed box when asked. This training enables staff to retrieve the infant if medically necessary and evaluate its health in a way that is safe and not stressful for the animals.

As part of the preparation for all possible scenarios, staff learned how to mix formula and trained females Bonnie and Iris to act as surrogate mothers in the event that Batang was unwilling or unable to care for her infant. The Zoo shared details about Batang’s behavioral changes in her third trimester on social media, including her occasional unwillingness to participate in training sessions and how her tastes in food had become more selective.

Native to Indonesia and Malaysia, orangutans are found only in the diverse forests of Borneo and Sumatra. For the past seven decades, humans have cleared land that was originally orangutan territory in order to meet the growing demand for palm oil products, fast-growing pulp wood and food crops leaving orangutans in competition with one another for space, food and mates. Scientists estimate that in the past 75 years, the number of wild orangutans has decreased by 80 percent. The International Union for Conservation of Nature lists Bornean and Sumatran orangutans as critically endangered.