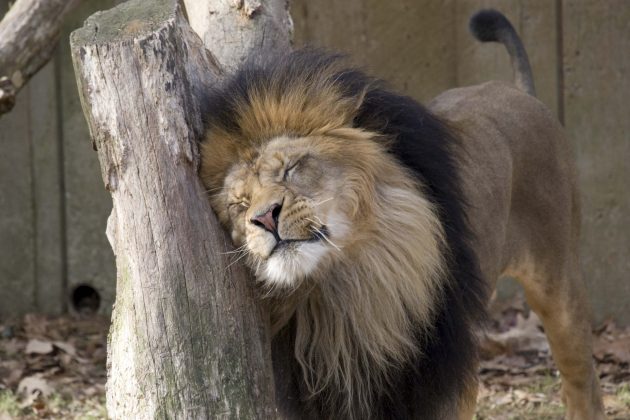 Pumpkin spice is a favorite scent of the National Zoo’s lions, sending them into wave of rolling, rubbing and scent marking. In this photo, African lion Luke investigates a log that Great Cats staff sprinkled with pumpkin spice. (Photo by Meghan Murphy)

“One cannot think well, love well, sleep well if one has not dined well,” Virginia Woolf once said.

Woolf’s sentiment is one that the staff at the Smithsonian’s National Zoo in Washington, D.C., take to heart. The animals there dine not just for nourishment but for the delight of all the senses and of the mind. So forget the reservations, white tablecloths, mother-of-pearl caviar spoons and the like. There is a lot to learn about the art of fine dining—National Zoo style.

Who doesn’t love the sweet smell and enticing taste of pumpkin spice? Warm feelings of fall leaves and cozy fires bubble to the surface when we detect that first whiff of this spicy goodness. Turns out, lions love this seasonal scent just as much as we do. 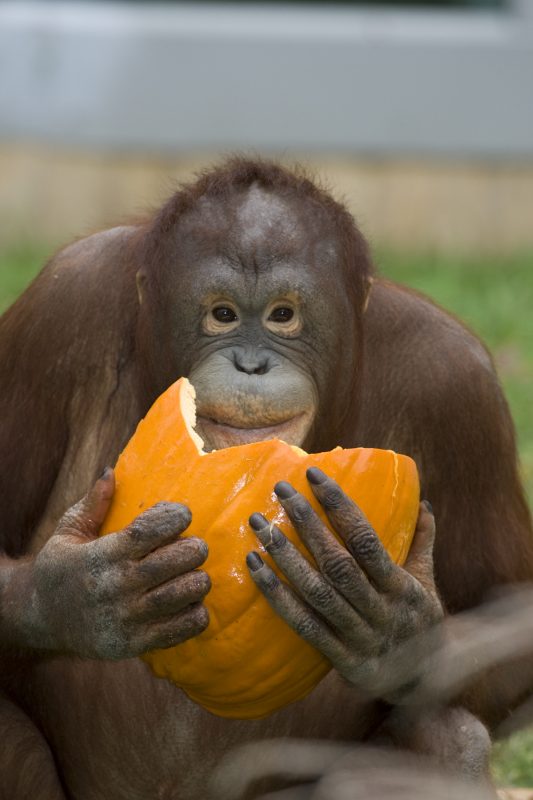 Batang, an orangutan at the National Zoo enjoys the taste of a pumpkin supplied by the Zoo’s commissary. (Photo by Mehgan Murphy)

“The lions take a long time rolling around in that scent and getting it all over themselves,” says Hilary Colton, animal keeper and vice chair of the National Zoo’s Enrichment and Training Committee.

Zoo staff scatter a range of spices, extracts, fur and other scents around the Zoo’s many animal habitats, encouraging animals to sniff and explore. Pumpkin spice is a favorite of the lions, sending them into a flurry of activity—rolling, rubbing and scent marking. 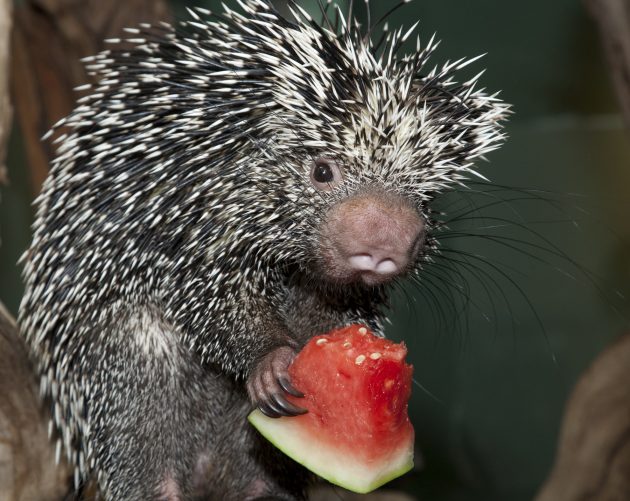 “The lions will scent mark the same way our cats do at home in that space,” says Colton. “We get a lot of behavior from using smell. We don’t have to use a lot because humans don’t have the entire spectrum of scent receptors that some of our animals do.”

Use the best ingredients

You would expect only the finest ingredients  at a Michelin-star restaurant and the animals at the Zoo receive nothing less.

“We use restaurant-grade produce. We don’t take seconds or donations,” explains Mike Maslanka, senior nutritionist and head of the Zoo’s Department of Nutrition Science. “We really pay attention to quality.” 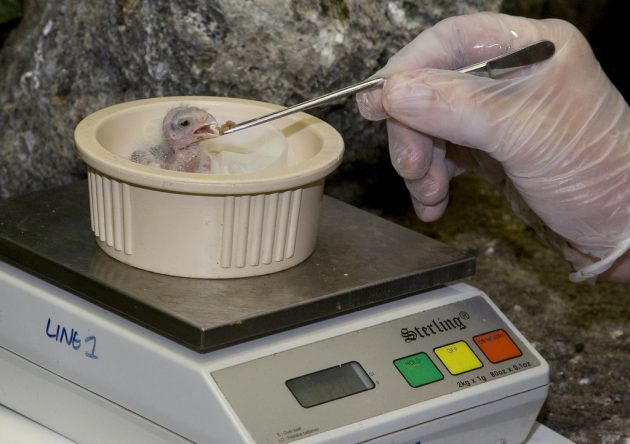 Like a top-rated restaurant, the day starts before the sun has risen with trucks–the very same that deliver to local grocery stores–dropping off a range of fresh fruits, vegetables and meats.  In addition, the zoo’s commissary gets some very special deliveries that are popular with its animal patrons.

“Mealworms and crickets come into the building once a week but they don’t stay long– they immediately they go out to the park. If we store insects here we have insects running all over the place,” Maslanka says. 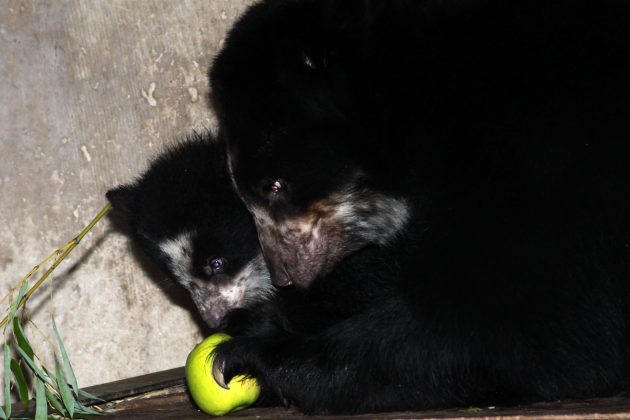 An Andean bear cub and its mother prepare to enjoy an apple at the National Zoo. (Photo by Karen Abbott)

While the meerkats and dwarf mongooses in the Small Mammal House love to dine on the live crickets,  delivering their food can be challenging.

“Sometimes, with the UPS truck full of crickets, we’ll have the great cricket escape because one of the boxes has accidentally opened,” he says. 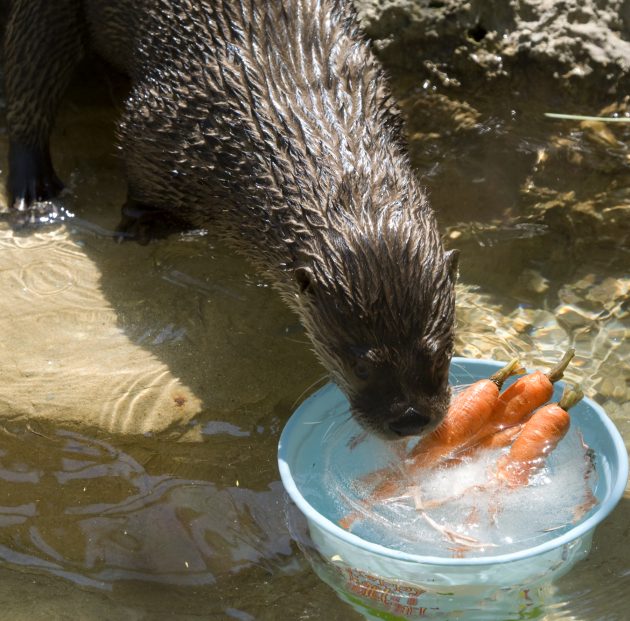 Cool carrots are served up to one of the National Zoo’s North American river otters on a sweltering day in summer. (National Zoo photo)

Play with your food

The simplest of foods can give us the greatest of pleasures. Take air-popped popcorn for example. By itself, it is a light and tiny treat, but add it to a length of specialized PVC pipe and it creates hours of fun for the Zoo’s elephants.

“The elephant keepers have made these pretty cool feeding devices out of PVC pipe,” says Colton. “The pipes have small holes in the top and places to store popcorn all throughout the tube. So, if the elephants blow with enough force in the bottom of the tube, it scatters the popcorn all over their exhibit. They can then spend hours searching for each little piece.” 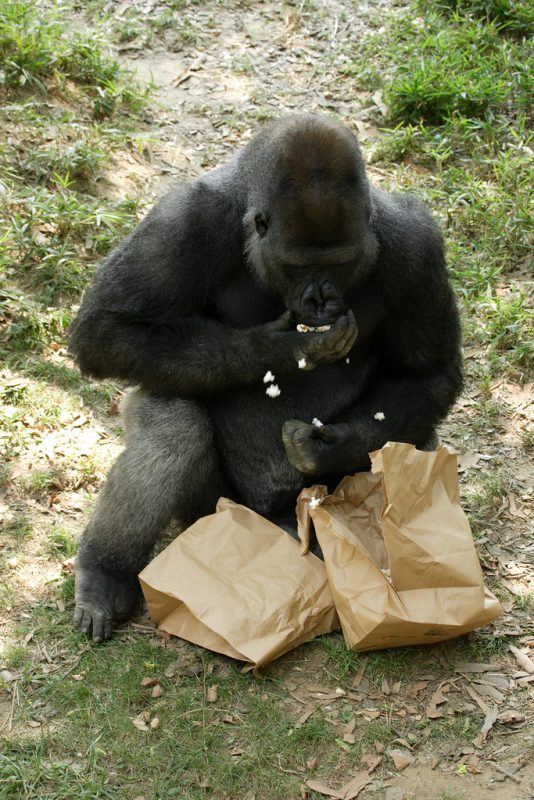 National Zoo silverback gorilla, Baraka, enjoys a bag of popcorn as part of the Zoo’s enrichment program. Gorillas are cognitive primates that spend much of their day foraging for food in the wild. Zoo animal care staff and nutritionists keep them mentally stimulated through food-based, problem-solving activities—such as figuring out how to open a bag containing delicious popcorn.

Popcorn is a popular food for encouraging natural foraging behavior in elephants and apes. Spending hours picking through the grasses of their exhibits to find all the individual pieces of food helps the apes stay mentally stimulated and engaged with their surroundings.

Dress it up with condiments

Many people like to add extra flavor to french fries with a little ketchup or mustard, and the animals at the Smithsonian’s National Zoo are no different. This  is especially handy when the clinical nutritionists at the Zoo need to get a picky eater excited about a  healthful but uninspiring meal. 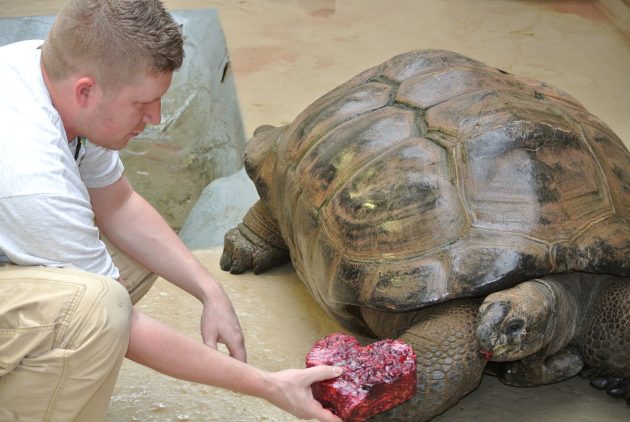 Beet pulp is a far cry from french fries. It resembles cardboard but is high in digestible fiber. Normally fed to horses, this dry shredded material is produced from the remains of sugar beets after the sugar has been extracted.

Beet pulp in itself is not all that appetizing to its intended elephant diners. But add a little hot sauce, and you have a winning dish.

“If you just put the beet pulp on the ground the elephant isn’t going to eat it,” explains Maslanka. “We mix it with ketchup, mustard or hot sauce in order to get that into them because it is not inherently a palatable thing.” 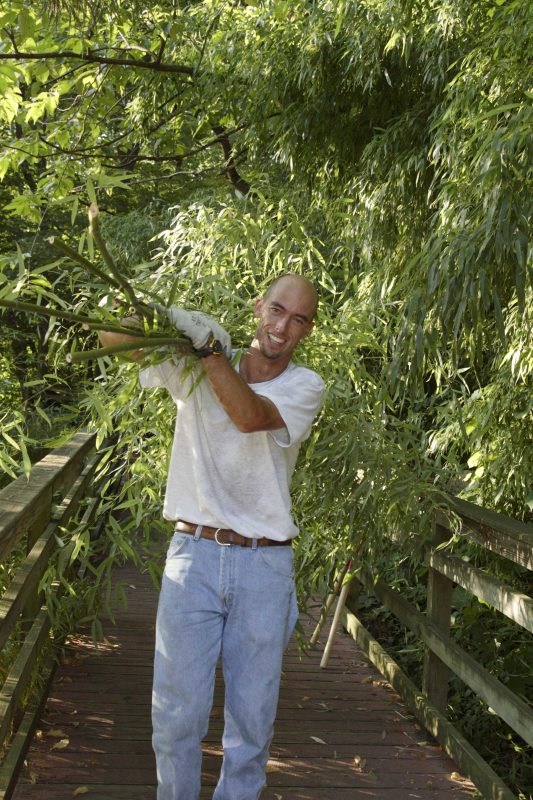 Mike Maslanka carries a load of fresh, locally-grown bamboo that will be served to the National Zoo’s giant pandas. (National Zoo photo)

The Zoo was into farm-to-table dining long before the trend took hold in Washington, D.C. restaurants. The Smithsonian’s National Zoo and Conservation Biology Institute (SCBI) is the only such organization in the U.S. to grow all of its own hay forages, including the mountains of bamboo to feed its famous pandas.

“Our bamboo is sourced from within a 75-mile radius of the Zoo,” Maslanka explains. “Right now, we are cutting bamboo from the Zoo grounds and the grounds of SCBI three to four days a week, as well as from 20 to 25 private landowners we have partnerships with.”

While keeping a giant panda in bamboo can be challenging, this fibrous food is not the only leafy delicacy grown for them. Corn also is grown in small amounts, not only on the 3,200-acre SCBI property at the facility in Front Royal, Virginia, but also on the Ape House’s rooftop garden. 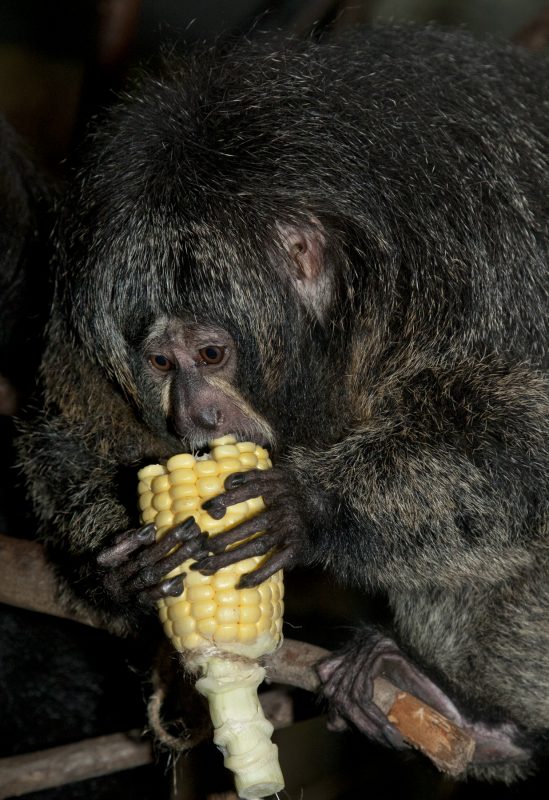 “The pandas really like the corn stalks,” Maslanka says. “I thought it would be a bigger hit when the corn was shorter, before the sugar had left the plant and gone into the ear. Turns out it wasn’t until the stalk has set the ear that the animals really started to prefer it. We had to rip the ears off and just give them stalks.”

One animal’s leftovers are another’s treat. What the pandas won’t eat, the apes are more than happy to munch.

“When fresh corn is in season the apes take advantage of that. They like the stalks and the silks as well as the actual vegetable,” Colton says.

Tailor your menu to your guests 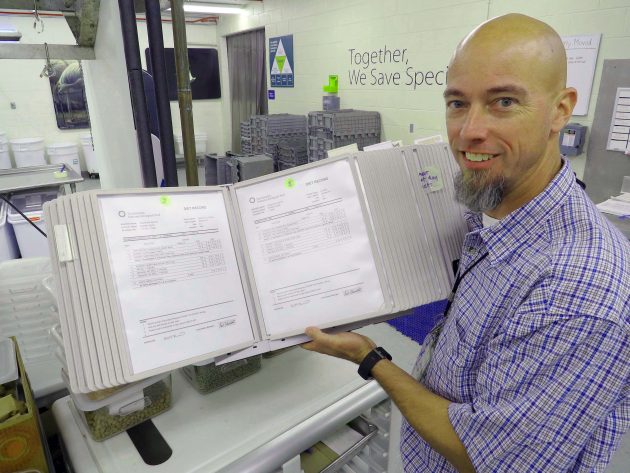 Each food preparation station in the National Zoo’s giant restaurant kitchen contains a diet book that outlines the meals for the 1,800-plus animals dining at the Zoo each day. As indicated on these pages displayed by Mike Maslanka, apple pieces, bananna (no peel), and orange (no peel) are a few of the items on the menu for the Zoo’s Brazilian agoutis. The book even contains the agouti’s names:  Hazelnut, Nutella and Filbert. (Photo by John Barrat)

Any dinner party host knows that it can be difficult to serve a meal that will make all of your guests happy. But most hosts don’t make an individual meal for each guest, unless you are among the dedicated commissary staff at the National Zoo.

To guide this mammoth task, each food preparation station in the Zoo’s giant restaurant kitchen has a diet book that outlines the meals for more than 1,800 animals dining at the Zoo each day. 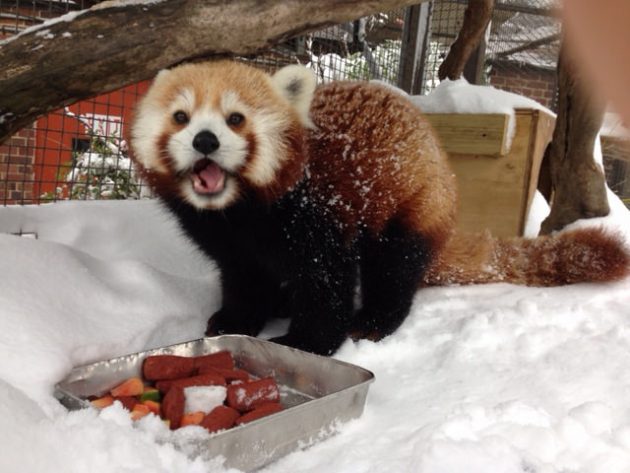 A red panda at the National Zoo’s Small Mammal House enjoys its meal outside in a blizzard on Jan. 23, 2016. Red pandas are well adapted to cold climates. Their thick fur covers their paws completely. (Smithsonian’s National Zoo photo)

“The diet book is basically the recipe book for the animal that is getting fed,” Maslanka explains. “The recipes come from either myself or our other clinical nutritionist and they are based on ingredients that we mix and match to meet the target nutrient values for the animal in question.”

“We provide variety by providing a rotation of items that vary day to day,” Maslanka says.