When great ape keepers at the Smithsonian’s National Zoo were deciding how to add more variety and enrichment to their animals’ lives, they turned to Orangutan Outreach and a program that had seen great success in 12 other zoos around the world: Apps for Apes. With the tap of a finger, keepers are introducing the Zoo’s six orangutans to iPads, which provide unique stimuli. They found that 36-year-old Bonnie likes to bang on the drums, 16-year-old Kyle prefers the piano and 25-year-old Iris is content to listen to the soothing sounds of the koi pond while watching animated fish splash.

Above: The Smithsonian’s National Zoo is participating in the Apps4Apes program, an Orangutan Outreach initiative, designed to further enrich the quality of lives for primates in zoos. (Video produced by Elliott Fabrizio)

“Apps for Apes fits perfectly in this new era of zoo keeping,” said Becky Malinsky, great ape keeper at the National Zoo. “It’s about changing up the day-to-day lives of our animals. We already vary their food, toys and social interactions every day, but the iPad offers another way to engage their sight, touch and hearing.”

The Zoo began participating in the Apps for Apes program last year, when a keeper’s family member donated an iPad to the Great Ape House. Malinsky and fellow animal keeper Erin Stromberg talked with the other program participants to determine which apps were the most popular among orangutans. In the past few months, the Zoo’s repertoire has grown to more than 10 apps, including musical instruments, cognitive games, drawing programs and others. Eventually, the Zoo hopes to connect its orangutans with those at other zoos using video conferencing platforms. 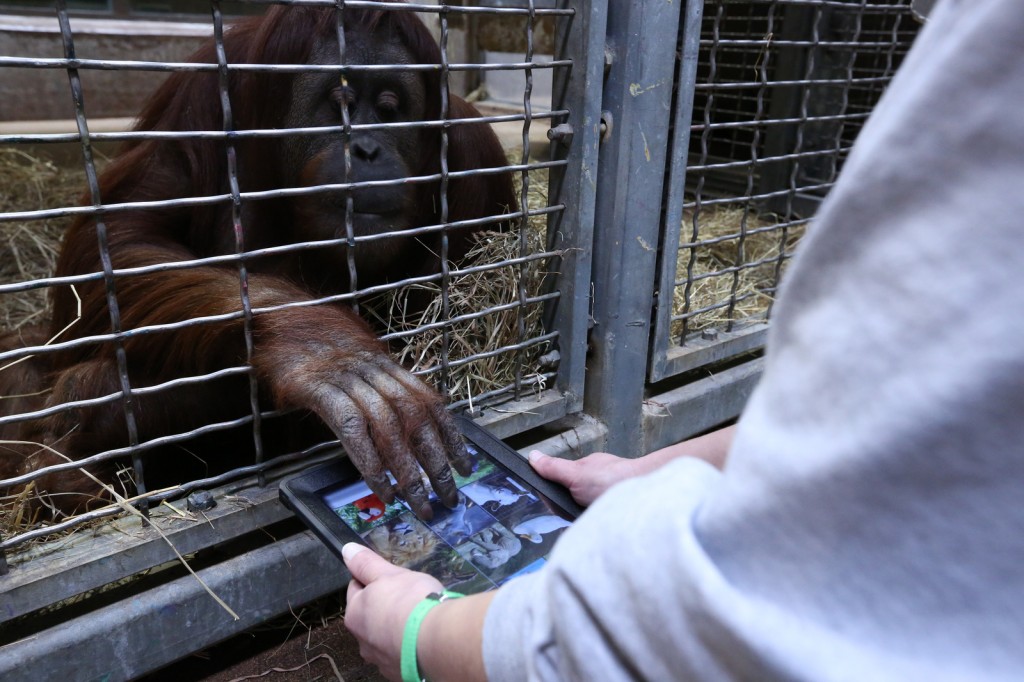 Iris, a 25-year-old orangutan at the Smithsonian’s National Zoo, uses an iPad as part of Orangutan Outreach’s Apps for Apes program. (Photos by Elliott Fabrizio)

Enrichment is an integral part of the daily care and quality of life for the animals at the Zoo. Staff study animal behavior and determine what kinds of enrichment are appropriate for each species and, occasionally, individual animals. They may alter an exhibit; train an animal; introduce new smells, sounds, foods and objects; or enlist an animal in a research project. Since 1994, the National Zoo’s orangutans have used touch-screen monitors as part of a cognitive study that tests orangutan memory, tool use and social learning.

Native to Indonesia, orangutans live in the tropical rainforests of Borneo and Sumatra. Over the past seven decades, humans have cleared land that was originally orangutan territory in order to meet the growing demand for palm oil products, fast-growing pulp wood and food crops leaving orangutans—which are solitary by nature—in competition with one another for space, food and mates. Scientists estimate that in the past 75 years, the number of wild orangutans has decreased by 80 percent. The International Union for Conservation of Nature lists the Bornean orangutan as endangered and the Sumatran orangutan as critically endangered.

Fans who want to provide the National Zoo’s apes with additional engaging apps can purchase an iTunes gift card through the Giving Tree on the Zoo’s website. Orangutan Outreach is also accepting iPad donations directly and will distribute the tablets to zoos around the country. Institutions that previously lacked the resources to participate would then be able to offer their orangutans the iPad enrichment experience.

Get a flu shot? These orangutans did….