Spiral galaxies are some of the most beautiful and photogenic residents of the universe. Our own Milky Way is a spiral. Our solar system and Earth reside somewhere near one of its filamentous arms. And nearly 70 percent of the galaxies closest to the Milky Way are spirals.

But despite their common shape, how galaxies like ours get and maintain their characteristic arms has proved to be an enduring puzzle in astrophysics. How do the arms of spiral galaxies arise? Do they change or come and go over time?

The answers to these and other questions are now coming into focus as researchers capitalize on powerful new computer simulations to follow the motions of as many as 100 million “stellar particles” as gravity and other astrophysical forces sculpt them into familiar galactic shapes. A team of researchers from the University of Wisconsin-Madison and the Harvard-Smithsonian Center for Astrophysics reports simulations that seem to resolve long-standing questions about the origin and life history of spiral arms in disk galaxies.

“We show for the first time that stellar spiral arms are not transient features, as claimed for several decades,” said UW-Madison astrophysicist Elena D’Onghia, who led the new research along with Harvard colleagues Mark Vogelsberger and Lars Hernquist. 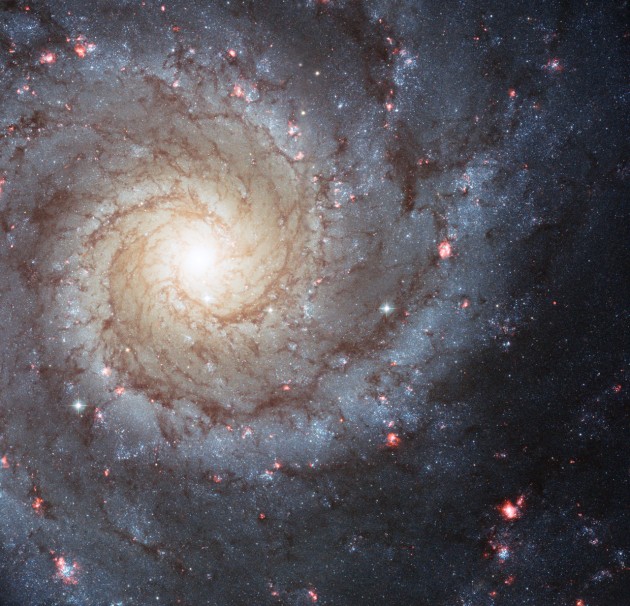 This Hubble Space Telescope photo of Messier 74 reminds us that spiral galaxies are some of the most beautiful and photogenic residents of the universe. Nearly 70 percent of the galaxies closest to the Milky Way are spirals. New research finds that spiral arms are self-perpetuating, persistent, and surprisingly long lived.

The origin and fate of the emblematic spiral arms in disk galaxies have been debated by astrophysicists for decades, with two theories predominating. One holds that the arms come and go over time. A second and widely held theory is that the material that makes up the arms – stars, gas and dust – is affected by differences in gravity and jams up, like cars at rush hour, sustaining the arms for long periods.

The new results fall somewhere in between the two theories and suggest that the arms arise in the first place as a result of the influence of giant molecular clouds—star forming regions or nurseries common in galaxies. Introduced into the simulation, the clouds act as “perturbers” and are enough to not only initiate the formation of spiral arms but to sustain them indefinitely. 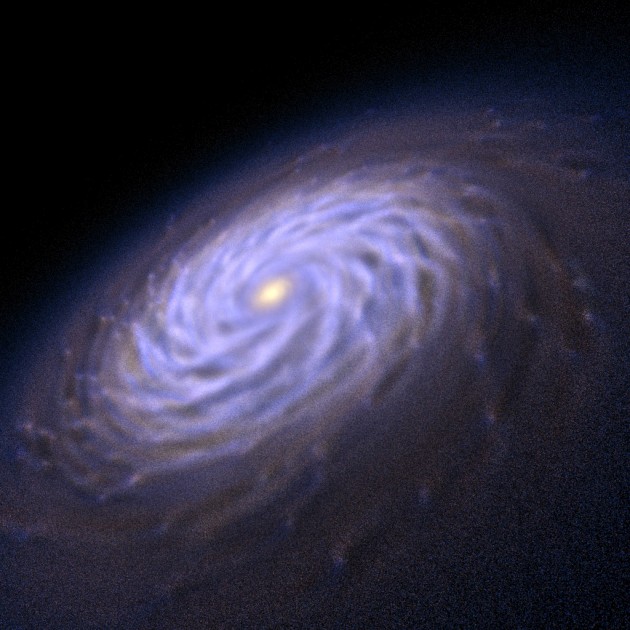 Powerful new computer simulations are allowing astronomers to understand how spiral arms in galaxies form and survive. These simulations suggest that the arms arise as a result of the influence of giant molecular clouds – star forming regions or nurseries common in galaxies. Credit: Thiago Ize & Chris Johnson (Scientific Computing and Imaging Institute)

The new study modeled stand-alone disk galaxies, those not influenced by another nearby galaxy or object. Some recent studies have explored the likelihood that spiral galaxies with a close neighbor (a nearby dwarf galaxy, for example) get their arms as gravity from the satellite galaxy pulls on the disk of its neighbor.

According to Vogelsberger and Hernquist, the new simulations can be used to reinterpret observational data, looking at both the high-density molecular clouds as well as gravitationally induced “holes” in space as the mechanisms that drive the formation of the characteristic arms of spiral galaxies.

The team’s research is being published in the April 1 issue of The Astrophysical Journal and is available online.

Recreating a slice of the universe