The Magellanic Stream is an arc of hydrogen gas spanning more than 100 degrees of the sky as it trails behind the Milky Way’s neighbor galaxies, the Large and Small Magellanic Clouds. Our home galaxy, the Milky Way, has long been thought to be the dominant gravitational force in forming the Stream by pulling gas from the Clouds. A new computer simulation by Gurtina Besla of the Harvard-Smithsonian Center for Astrophysics and her colleagues now shows, however, that the Magellanic Stream resulted from a past close encounter between these dwarf galaxies rather than effects of the Milky Way.

This plot shows the simulated gas distribution of the Magellanic System resulting from the tidal encounter between the Large Magellanic Cloud and Small Magellanic Cloud as they orbit our home Milky Way Galaxy. Click to enlarge. (Credit: Plot by G. Besla, Milky Way background image by Axel Mellinger)

“The traditional models required the Magellanic Clouds to complete an orbit about the Milky Way in less than 2 billion years in order for the Stream to form,” says Besla. Other work by Besla and her colleagues, and measurements from the Hubble Space Telescope by colleague Nitya Kallivaylil, rule out such an orbit, however, suggesting the Magellanic Clouds are new arrivals and not long-time satellites of the Milky Way.

This creates a problem: How can the Stream have formed without a complete orbit about the Milky Way?

To address this, Besla and her team set up a simulation assuming the Clouds were a stable binary system on their first passage about the Milky Way in order to show how the Stream could form without relying on a close encounter with the Milky Way. 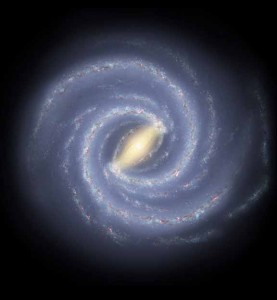 This artist’s concept illustrates the latest view of the Milky Way’s structure. The galaxy’s two major arms (Scutum-Centaurus and Perseus) can be seen attached to the ends of a thick central bar, while the two now-demoted minor arms (Norma and Sagittarius) are less distinct and located between the major arms. (Image by Robert Hurt, SSC/JPL/Caltech)

The team postulated that the Magellanic Stream and Bridge are similar to bridge and tail structures seen in other interacting galaxies and, importantly, formed before the Clouds were captured by the Milky Way.

“While the Clouds didn’t actually collide,” Besla says, “they came close enough that the Large Cloud pulled large amounts of hydrogen gas away from the Small Cloud. This tidal interaction gave rise to the Bridge we see between the Clouds, as well as the Stream.”

“We believe our model illustrates that dwarf-dwarf galaxy tidal interactions are a powerful mechanism to change the shape of dwarf galaxies without the need for repeated interactions with a massive host galaxy like the Milky Way.”

“We can tell this from the line-of-sight velocities and spatial location of the tail observed in the Stream today,” says team member Lars Hernquist of the Center.