Using the super-sharp radio “vision” of astronomy’s most precise telescope, the Very Long Baseline Array, scientists are redrawing the map of The Milky Way.

The VLBA is a system of ten radio-telescope antennas, each with a dish 25 meters (82 feet) in diameter and weighing 240 tons. From Mauna Kea on the Big Island of Hawaii to St. Croix in the U.S. Virgin Islands, the VLBA spans more than 5,000 miles, providing astronomers with the sharpest vision of any telescope on Earth or in space. Its power allows astronomers to make precise cosmic measurements with far-ranging implications for research within our own galaxy and beyond. 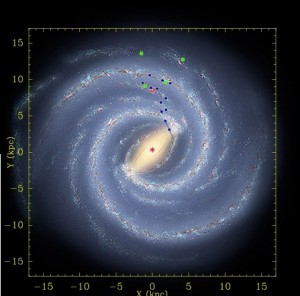 Recent work has added dozens of new measurements to star-forming regions in the Milky Way. These measurements improve on earlier estimates by as much as a factor of two and have changed the map of the Milky Way, indicating our galaxy has four spiral arms, not two, as previously thought. 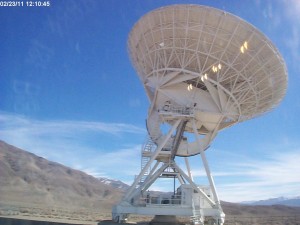 “Because we sit inside our galaxy, it is difficult to actually map it,” explains astronomer Mark Reid, of the Harvard-Smithsonian Center for Astrophysics in Cambridge, Mass. “These precision distance measurements are our most effective tool for learning about the structure of the Milky Way.” Earlier work by Reid and his colleagues showed that the Milky Way is rotating faster than previous estimates. That measurement in turn showed our Galaxy to be more massive, equaling our neighbor, the Andromeda Galaxy, in mass.

Reid’s team also is observing the Andromeda Galaxy in a long-term project to determine the direction and speed of its movement through space. “The standard prediction is that the Milky Way and Andromeda will collide in a few billion years,” Reid says. “By measuring Andromeda’s actual motion, we can determine with much greater accuracy if and when that will happen.”–NRAO Web Site

New research reveals our galaxy is much larger than we thought