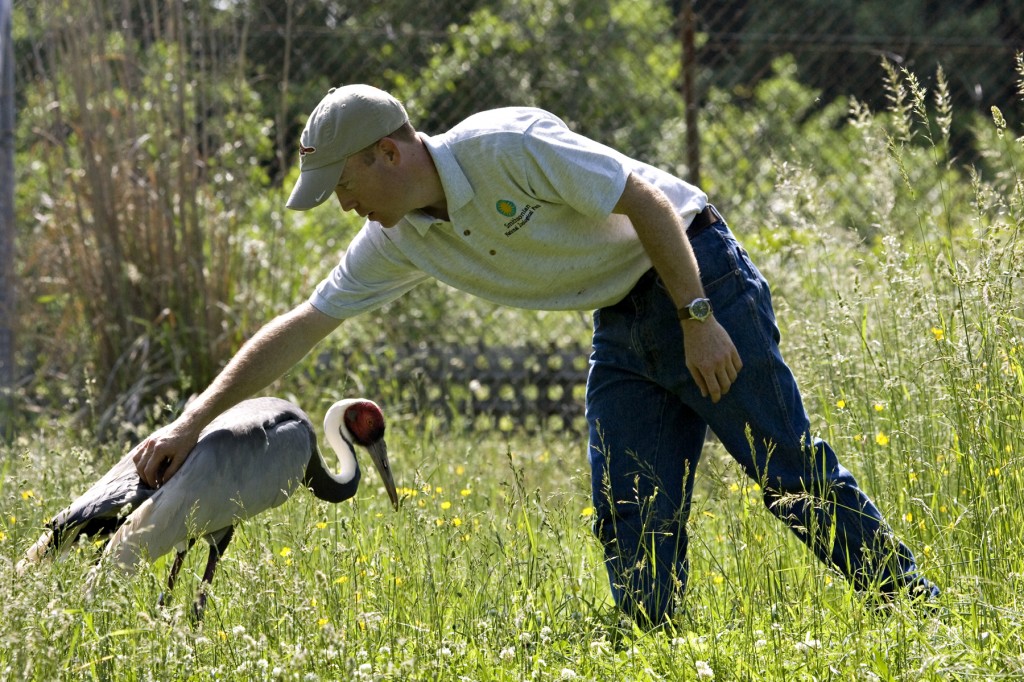 Love is blind, and to illustrate this point Cupid is often shown wearing a blindfold. Two wings on Cupid’s back are meant to symbolize the flightiness of lovers and how easily affections can change. For some at the Smithsonian’s Conservation Biology Institute in Front Royal, Va., however, a pair of wings can indicate just the opposite: strong fidelity and loyalty to a mate.

Chris Crowe, keeper of the National Zoo’s 15 white-naped cranes, is well acquainted with the strong attachments these graceful Asian birds form with their mates. Couples are monogamous and stay together for life. Critically endangered in the wild, white-naped cranes typically live for 10 to 20 years in the wild and 40 to 50 years in captivity. 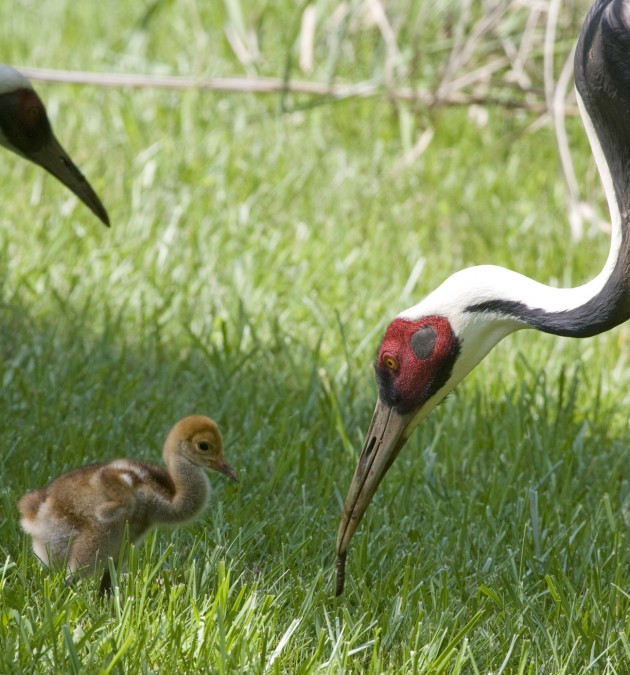 A white-naped crane mother checks-up on her chick at the Smithsonian Conservation Biology Institute.

Their monogamy, Crowe explains, has nothing to do with romance and everything to do with parenthood. “Males and females take turns sitting on their eggs during the month-long incubation and they both cooperate in feeding, protecting and raising their chicks to independence at 8 months. Staying with a proven mate that you know can do a good parenting job enhances the probability of your raising chicks successfully over and over.” The National Zoo’s oldest pair of white-naped cranes has been together since 1998.

During the breeding season a white-naped crane pair becomes fiercely territorial, not in fear of an interloper stealing their mate, but “because they must ensure there is enough food around for them and their chicks,” Crowe says. Chicks leave the nest 24 hours after hatching and then follow the adults around to find food. By protecting their turf they are defending the nearby supply of insects, crustaceans, reptiles, tubers, worms, seeds and small mammals the cranes find tasty.

Each year wild white-naped crane couples migrate from their breeding grounds in China, Mongolia, and Russia to their wintering grounds in southeastern China, Japan, and the Korean Demilitarized Zone. It is a perilous journey of thousands of miles during which they must contend with habitat loss, human disturbance, illegal shooting and predators. Nonetheless, a pair is rarely out of sight from one another, and never out of earshot. When separated “they emit a very loud location call. Each partner recognizes its mate’s voice, even in a large flock,” Crowe explains. 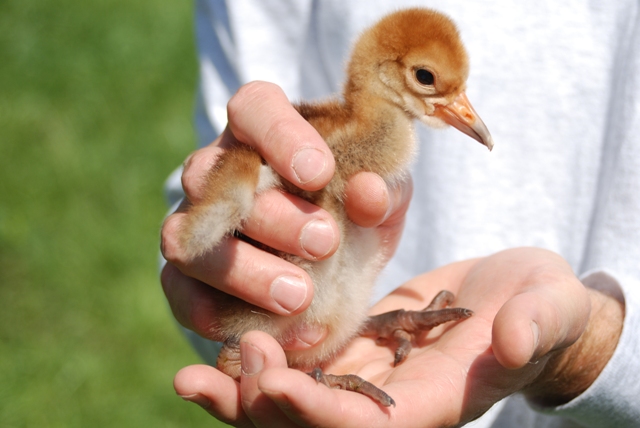 A white-naped crane chick in the hands of a keeper at the Smithsonian Conservation Biology Institute.

At the Zoo, “for their quality of life and well being, we don’t separate a pair of white-naped cranes unless absolutely necessary,” Crowe explains. “If the male and female of a separated pair can still hear the other calling from another enclosure they will always want to get back together with that one and never re-pair with someone else.”

At the death of a mate, the surviving bird will “do a lot of location calls and looking around,” Crowe says. “Their appetite will suffer. It is not as obvious as it would be, say with a person where you can easily see their emotions, but the loss of a mate does seem to make these cranes kind of depressed and to exhibit abnormal behavior.”

During breeding season a white-naped crane couple does a lot of dancing, jumping up and down, tossing objects together and building a nest. They also sing a unison call, Crowe explains, “where both the male and female are calling at the same time. The male raises and lowers his wings as he calls while the female points her head upward and calls twice for each call from the male.” Unison calls advertise a pair’s territory, “but it also seems to strengthen the bonds between a pair.”

Copulation “is pretty quick and is precipitated by more dancing that can go on for 5 to 10 minutes,” Crowe says. Then the female leans forward, raises her tail a bit, spreads her wings and the male flies up and lands on her back. She raises her tail and then their two cloacae [reproductive organs] meet. “All their reproductive organs are inside the cloacae, so basically there’s no phallus for the male,” Crowe says. “He just jumps up on top, leans down and their cloacae meet in what we call a ‘cloacal kiss.’  He jumps off and they dance a bit more. That’s it.” 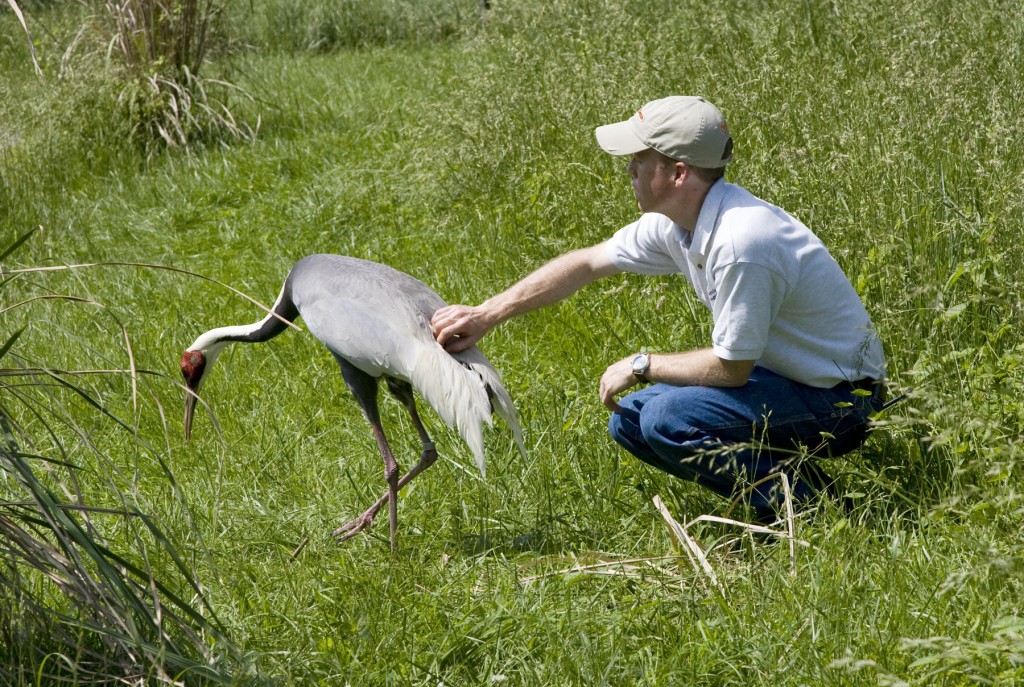 An egg is usually laid a few days after copulation. They then copulate again for a second egg, which completes their normal annual clutch.

“When we pair these birds at an early age we do it based on their genetics, to help increase the genetic diversity of our flock,” Crowe explains.

Once they are paired the keepers also use artificial insemination to increase the flock’s genetic diversity, primarily by capturing the genes of birds that cannot breed naturally due to behavioral or physical problems, but also mating two birds that are paired with others.

Interestingly, one female white-naped crane under Crowe’s care is paired with Crowe. “Walnut and I both arrived here in 2004,” he says. “She was hand-raised at another zoo and is socially bonded with people instead of cranes.”

Walnut had never produced any chicks of her own by age 24 and arrived at the Zoo as the most genetically valuable white-naped crane in captivity. “Today, she directs all her breeding behavior towards me,” Crowe says, “dancing, jumping up and down, and soliciting me to mate with her. I bring her favored treats—mice, grapes, and mealworms—help her build a nest, dance with her—if I am sure nobody is watching—offer verbal praise, and spend time with her to maintain our pair bond. I am her primary keeper, taking care of her 5 out of 7 days a week.”

Normally, Zoo staff must catch and restrain the cranes to do artificial insemination, but over time Crowe has trained Walnut “to stand still and let me do it by myself and without restraining her. She is very aggressive towards everyone else, even the other keepers, but always very friendly with me.”

The Zoo has produced 5 female chicks from Walnut through artificial insemination. “Two of these chicks have gone on to breed naturally and produce chicks of their own, making Walnut and I grandparents,” Crowe says proudly.