At the Smithsonian Conservation Biology Institute in Front Royal, Va., the white-naped cranes Cal and Bill turned seven months old in December, and they are thriving. They still stay close to their parents, yet are more confident and approach their keepers for treats. Their wild counterparts would now be migrating south for the winter. It is thought that the shortening days of fall alert the cranes to instinctively begin their migration. Wild cranes need extra muscle and reserves for migration and begin to eat more prior to their journey. 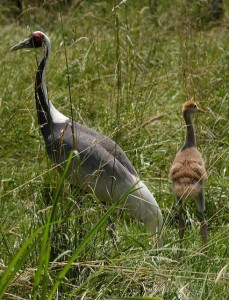 Images right and below: White-naped cranes at the National Zoo (Photos by Mehgan Murphy)

A life in captivity does not stop our captive cranes from responding to the changing day lengths and putting on weigh. In the wild white-naped cranes migrate from their breeding grounds in China, Mongolia, and Russia to their wintering grounds in southeastern China, Japan and the Korean Demilitarized Zone. Migration is a perilous time for cranes, which must travel thousands of miles while contending with habitat loss, human disturbance, illegal shooting and predators.

Cal and Bill stay outside during winter because their species is well adapted to the cold and snow that they encounter on their wintering range in the wild. Significant snowfall however, does require our keepers to shovel pathways throughout the bird’s pens. 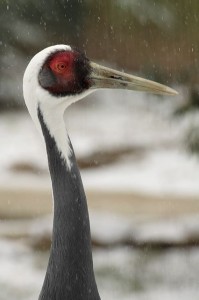 Cal and Bill will stay with their parents until early next year. Wild cranes are forced out of their parents’ territory before the spring breeding season and then begin flocking together with cohorts of the same age. Since they were not raised together, we will initially house the two brothers in adjacent pens to monitor their compatibility. Because they are the same age we expect them to get along well and be able to live together in the same pen. Once they’re old enough, both males will be paired with females either here in Front Royal or at other zoos to help conserve their species through captive breeding. White-naped cranes are a critically endangered species and Cal and Bill have a bright future saving their species.