Scientists have studied bird migration for centuries, but it remains one of nature’s great mysteries. How do birds find their way over long distances between breeding and wintering sites? Is their migration route encoded in their genes, or is it learned?

Working with records from a long-term effort to reintroduce critically endangered whooping cranes in the Eastern U.S., a University of Maryland-led research team found evidence that these long-lived birds learn their migration route from older cranes, and get better at it with age. 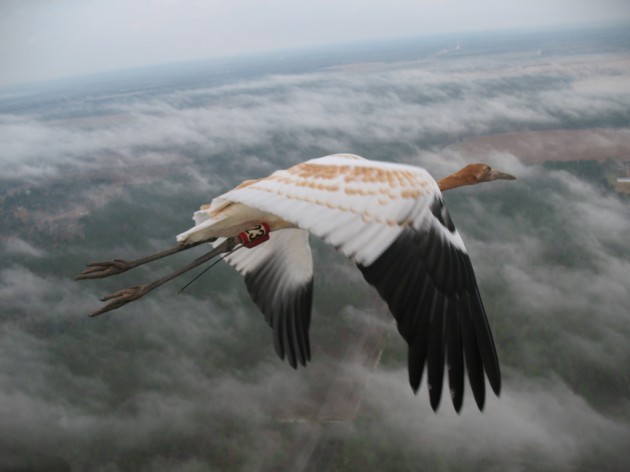 This young whooping crane is on its first fall migration, guided by an Operation Migration ultralight. Brown bars on its wings will fade by the time this bird migrates north in spring. Whoopers in the Eastern population have identifying bands, and many carry tracking devices that record their movements in detail. (Photo: Joe Duff/copyright Operation Migration USA Inc.)

grounds, the researchers found. One-year-old birds that did not follow older birds veered, on average, 60 miles (97 kilometers) from a straight flight path. When the one-year-old cranes traveled with older birds, the average deviation was less than 40 miles (64 kilometers).

Individual whoopers’ ability to stick to the route increased steadily each year up to about age 5, and remained roughly constant from that point on, the researchers found.

Many migration studies are done in short-lived species like songbirds, or by comparing a young bird to an older bird, said Smithsonian Conservation Biology Institute and UMD biologist Thomas Mueller, an expert on animal migration and the study’s lead scientist. “Here we could look over the course of the individual animals’ lifetimes, and show that learning takes place over many years.”

The researchers’ findings, to be published August 30 in the journal Science, are based on data from an intensive effort to restore the endangered bird to its native range. The whooping crane (Grus americana), is North America’s largest bird, standing five feet tall, and one of its longest-lived, surviving 30 years in the wild. The species was near extinction in the 1940s, with fewer than 25 individuals. Today about 250 wild whoopers summer in Canada and migrate to Texas for the winter.

The Whooping Crane Eastern Partnership, made up of government and non-profit experts, has been working since 2001 to establish a second population in the Eastern U.S., which now numbers more than 100 birds. At Maryland’s Patuxent Wildlife Research Refuge and other captive breeding sites, adult whooping cranes produce chicks and biologists hand-raise them, using special methods designed to prepare the chicks for life in the wild. Each summer in a Wisconsin marsh, experts from the non-profit Operation Migration train a group of captive-raised chicks to follow an ultralight aircraft, using techniques like those portrayed in the fictional 1996 movie “Fly Away Home” to lead them on a 1,300-mile journey to their Florida wintering grounds.

Only this first migration is human-assisted; from then on the young birds travel on their own, usually in the company of other whooping cranes. Their movements are monitored daily via satellite transmitters, radio telemetry and on-the-ground observers. The result is a record of the movements of individual birds over several years, all with known parentage and the same upbringing. 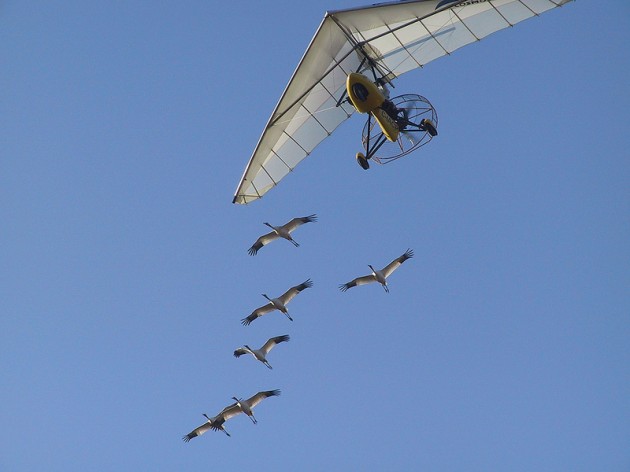 ll the whooping cranes studied by the University of Maryland team received the same flight training as chicks, following an Operation Migration ultralight from Wisconsin to Florida in the fall. The Science study looked at data on their subsequent migrations, beginning the following spring. (Photo: Heather Ray/copyright Operation Migration USA Inc.)

“This is a globally unique data set in which we can control for genetics and test for the effect of experience,” said UMD Biology Professor William F. Fagan, a co-author of the paper, “and it gives us an indication of just how important this kind of socially learned behavior is.”

Using data on all the ultralight-trained birds’ spring and fall migrations from 2002 to 2009, the researchers found that neither genetic relatedness nor gender had any effect on the whooping cranes’ tendency to stay on the shortest migratory route. They were surprised to find that the migrating groups’ size also made no difference.

“Many biologists would have expected to find a strong effect of group size,” Fagan said, “with input from more birds’ brains leading to improved navigation, but we didn’t see that effect.”

Only one experienced bird per group was enough to keep the migration on track. The researchers hypothesize that older birds are better at recognizing landmarks and coping with bad weather. Stronger autumn winds may explain why the whoopers tended to stray further from their straight course during fall migration, Mueller said.

The study shows the migration training for captive-born whooping cranes is working, Mueller said. However, the reintroduced whoopers are having trouble breeding in the wild. Based on the migration study’s finding, “we need to take into consideration that these birds may also reproduce more successfully as they age,” he said.

Given the whooping cranes’ recent plunge towards extinction, it wouldn’t be surprising if the birds need to re-learn how best to raise their chicks, said Patuxent-based scientist Sarah J. Converse of the U.S. Geological Survey, a co-author of the paper.

“These birds’ behaviors have evolved over millennia,” Converse said. “Managers here are trying to restore a culture, that is, the knowledge that these birds accumulate over time. We need to give these birds the time and the opportunity to get the breeding right. We might need to be a little bit patient.”

The National Science Foundation, the LOEWE Programme, and the Robert Bosch Foundation funded the research.