For male golden orb web spiders of the tropical species Nephila pilipes, few of life’s adventures present more dangers than mating. Female N. pilipes—roughly 10 times larger than the males—are known to interrupt copulation with an abrupt kick, after which they may grab the stunned male and eat him.

Video and images: To sooth the female during copulation bouts the male N. pilipes spider gently spreads fine silk upon the dorsum of the female. It is the touch of the male that soothes the female most of all a team of researchers recently learned through a series of laboratory tests. Click photos to enlarge. (Images courtesy Shichang Zhang, National University of Singapore) 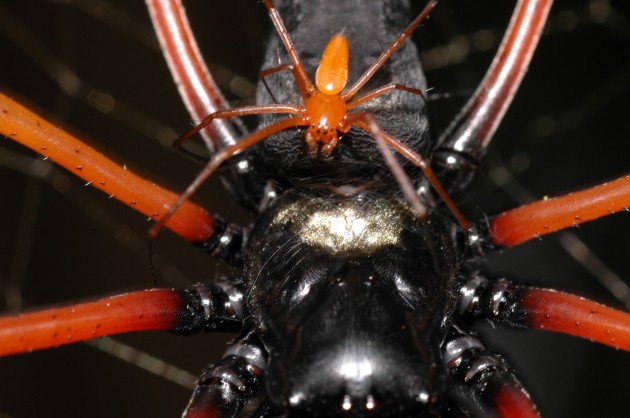 To appease the female and make her more receptive to the multiple copulation sessions that are common among these spiders, the male N. pilipes spins a fine silk which he gently spreads about the female’s dorsum or backside—a behavior scientists call “mate binding.”

Now, a new study by a team of scientists from the Smithsonian’s National Museum of Natural History, the National University of Singapore, Hubei University, and the Slovenian Academy of Sciences and Arts have unlocked the secret to this little-studied behavior, and revealed just how it calms the female. Essentially, the scientists write in a recent paper, mate binding might be more descriptively termed “mate massaging,” as it is the tactile communication between the male and female N. pilipes, not the silk or chemical pheromones in the silk, that is the most important calming factor in this process. 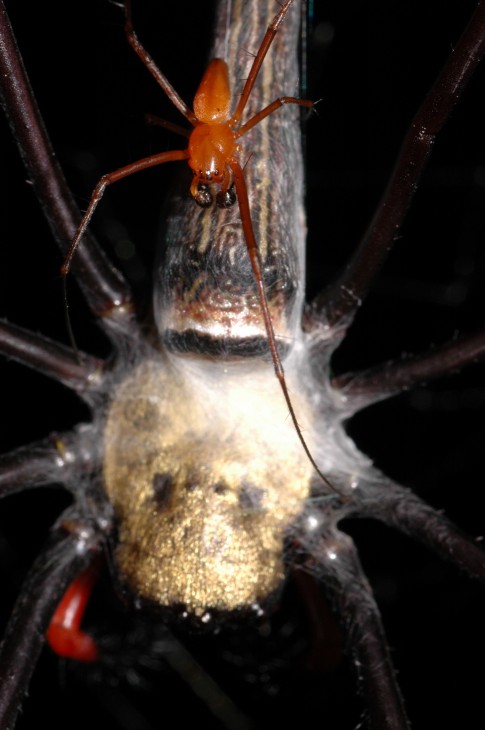 In a series of laboratory experiments, the scientists—Shichang Zhang from the National University of Singapore, Daiqin Li of the National University of Singapore and Hubei University in China and Matjaž Kuntner of the Slovenian Academy of Sciences and Arts and a research associate at the Smithsonian’s National Museum of Natural History—blocked the tactile feeling on the dorsum of one group of female spiders with a thin layer of glue, and blocked the chemical receptors on the forelegs and palps (appendages near the mouth) of other females. In a third group of females they blocked both of these senses.

In addition, on a number of males they blocked the spinnerets used to spin the fine silk used in mate binding. 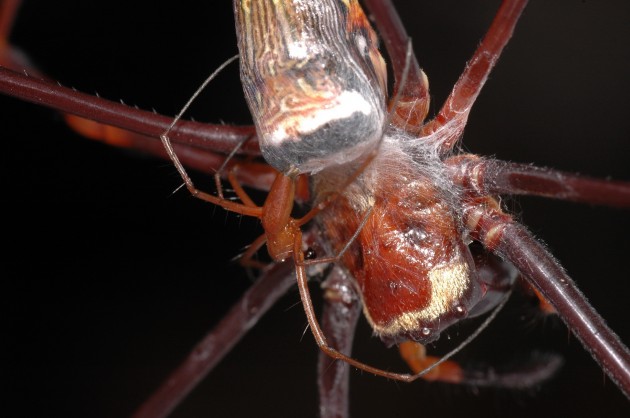 Next, they placed male spiders on the webs of the females and observed their mating behavior. What they learned, the scientists write, is that mate binding is not an obligatory behavior that always precedes mating, but rather, it always “occurred after females had interrupted copulations and became aggressive towards their suitors.”

Tactile communication caused by the male spider moving around the dorsum of the female with his spinnerets rubbing against her was the most important calming factor in mate binding behavior, they determined. Chemical signals embedded in the silk also appeared to have a calming influence on the females, but are secondary to the tactile feel of the male moving around the female’s dorsum. Silk production is but a by-product of the mate binding behavior.

Mate binding “enables the male to mate with the female multiply,” reducing her resistance and aggression, prolonging copulation bouts and maximizing the male’s paternity, the scientists conclude.