Even after the sexual organs of the male orb web spider Nephilengys malabarensis have broken off during copulation, they continue to do the work of transferring sperm to the female, a new study published in the journal Biology Letters has revealed. In fact, researchers have learned, the detached male pedipalps transfer more sperm faster after copulation is ended by the female than when it is ended by the male. 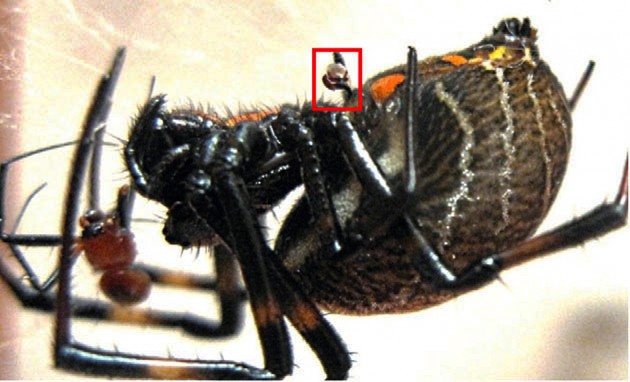 AnNephilengys malabarensis female with a severed male palp (red box) lodged in her epigynum after copulation, and a half-cannibalized male at her side. (Photo by Daiqin Li)

N. malabarensis females normally end copulation (which lasts an average of 8.3 seconds) by grabbing and devouring the much-smaller male or by yanking him off. Scientists have long known that during copulation the palps (males have two, one located on each side of their heads) snap off entirely inside the female’s genitals, effectively plugging them to prevent her from mating again. Males will end copulation by deliberately severing their own palps. As the eunuch male is being eaten or fleeing the female’s jaws, sperm transfer continues from his severed organs into the female’s genitals, a previously unknown process newly coined as “remote copulation.” 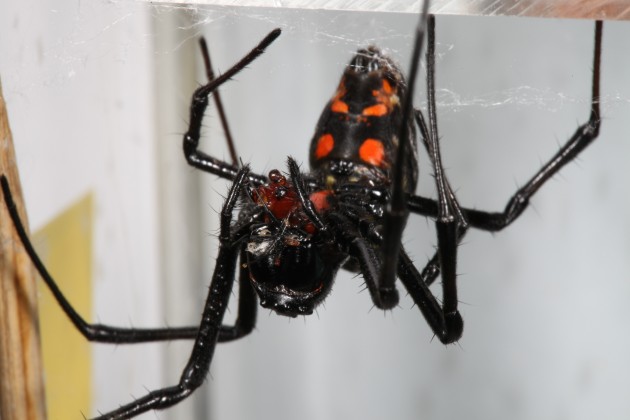 “Frankly, we don’t know” the physics behind this process, says Matjaž Kuntner, co-author of the recent paper in the journal Biology Letters and a research associate at the Smithsonian’s National Museum of Natural History and the Slovenian Academy of Sciences and Arts. When connected, “a palp usually pumps out sperm through the hydraulic action of the membranes, but in the case of remote copulation, the mechanism is unknown.”

Also unknown, Kuntner says, is why the organ works faster when the female terminates copulation. “I think it is connected to sexual conflict,” he explains. “If the female is the one to terminate copulation, then it is also likely that she will attempt to remove the remotely copulating organ. There’s where transfer speed may matter.” 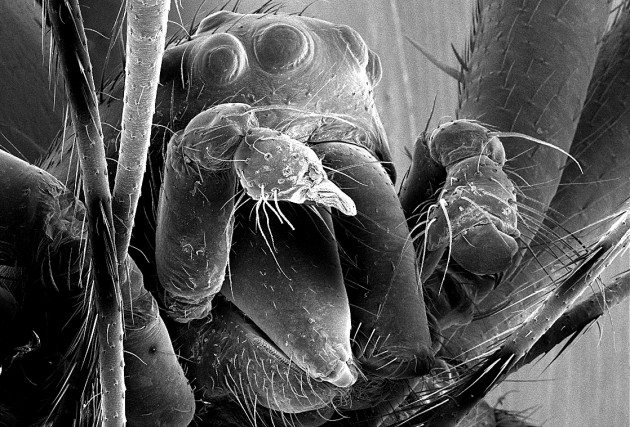 This scanning electron microscope image of a eunuch N. malabarensis shows its head with eyes and mouthparts, and the two broken stumps of its pedipalps. (Photo courtesy Matjaž Kuntner)

To conduct their experiment Kuntner and his co-authors collected immature N. malabarensis spiders in Singapore and raised them to maturity. Males were placed on the female’s web and the spiders were observed before and after copulation occurred. Twenty-five mating pairs of spiders were used in the experiment. Broken palps were allowed to remain in the female’s genitals for varying periods of time before they were removed by the scientists. The researchers then isolated and counted the sperm that remained in each of the palps and the sperm that had successfully entered each  female’s genitals.

The study suggests “remote copulation is an additional male adaptation to sexual cannibalism and to female control of copulation duration,” the researchers write in their paper. It allows the male to maximize his reproductive potential through continuous sperm transfer after copulation, and by monopolizing the female she is unavailable to rival males.