The Smithsonian’s National Zoo is celebrating the birth of two Andean bear cubs born in the early morning of Dec. 13 to 6-year-old Billie Jean. The first cub was born around 12:01 a.m. and the second at 2:02 a.m. These two cubs were sired by Nikki, who was humanely euthanized in August. 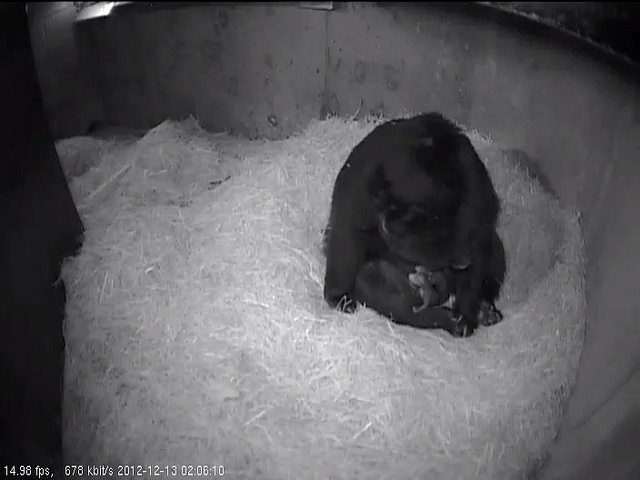 Billie Jean and her two new cubs at the Natinoal Zoo.

This species has a high mortality rate, with first-year mortality at 41 percent for males and 44 percent for females. The Andean bear population in human care has experienced a lull in the past six years and these cubs are the only surviving Andean cubs in a North American Zoo since Billie Jean’s first cubs, Bernardo and Chaska, were born in 2010. Animal care sciences staff will monitor the cubs on the Andean bear cam, but will leave Billie Jean to bond with and care for her cubs without interference. It will be at least two months before keepers and veterinarians can determine the cubs’ sex.

The public can also view Billie Jean and the cubs on the live camera on the Zoo’s website or mobile app. For now the Zoo will be collecting screenshots in a Flickr album and is asking the public to contribute images and video to a separate Flickr album. The Zoo will also post updates on Facebook and Twitter.

Andean bear at the National Zoo enjoys the snow