Five cheetah cubs were born May 28 to 6-year-old Amani at the Smithsonian Conservation Biology Institute in Front Royal, Va. Amani is a dedicated mother according to keepers, who have observed her nursing and grooming the cubs. 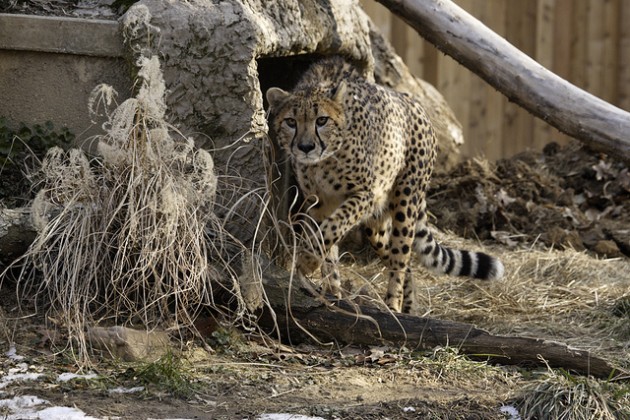 Amani in her enclosure at the National Zoo. (Photo by Mehgan Murphy)

This litter is particularly significant to the Association of Zoos and Aquariums’ Species Survival Plan for cheetahs because cheetah births in zoos across the country have dwindled. The SSP matches animals across the country to ensure genetic diversity in the population. This is the only litter of cheetahs born this year in a North American zoo.

“We are very excited that Amani had such a large litter of cubs this time,” said Adrienne Crosier, SCBI cheetah biologist. “These cubs are very significant for the future of the population, and each birth gives us an opportunity to learn more about cheetah biology and how females raise their young.” 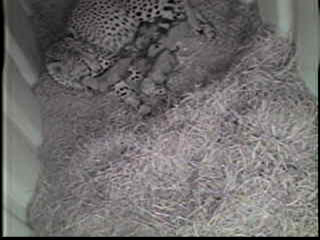 Amani with cubs in her den at the Smithsonian Conservation Biology Institute in Front Royal, Va.

The mortality rate for cheetah cubs in human care is 20 percent during the first six months, compared to a mortality rate of up to 70 percent in the wild population in east Africa. Keepers will continue to monitor the newborns. In addition to the litters born at SCBI in Front Royal, two litters of cheetahs have been born at the Zoo’s Washington, D.C. facility since 2004.

SCBI is one of five centers participating in research to boost the captive cheetah population as part of the Conservation Centers for Species Survival, also known as C2S2.

This is the second litter born to Amani. In December 2010 she gave birth to a male cub. Cheetahs that give birth to only one cub, called a singleton, often cannot produce enough milk to keep the cub alive. Typically, females in the wild will let a single cub die, after which they will enter estrus and breed again. So scientists at SCBI gave Amani’s male cub to another female, Zazi, who had a 5-day-old single female cub. This strategy, known as cross-fostering, has worked and Zazi is raising the two active and healthy cubs.

Cheetahs, the fastest animals on land, are struggling to outpace threats to their survival in the wild. As the result of human conflict, hunting and habitat loss, there are only an estimated 7,500 to 10,000 cheetahs left in the wild. The International Union for Conservation of Nature considers cheetahs a vulnerable species.