Poachers at large in Thailand’s nature reserves despite ranger outposts

Khao Yai National Park in central Thailand covers some 1,357 square miles and, as Thailand’s oldest and most popular park, welcomes hundreds of thousands of visitors through its gates each year.

Recently, after examining hundreds of photos taken by camera traps set-up to monitor clouded leopards in the park, three Smithsonian researchers say Khao Yai also is quite popular with a different kind of visitor: poachers. 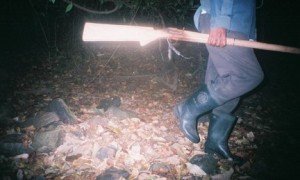 Next to the Eurasian wild pig, humans were the most common creature to show-up in the camera-trap photos, namely villagers, park staff, tourists and poachers, write Kate Jenks, JoGayle Howard and Peter Leimgruber of the Smithsonian Conservation Biology Institute in a recent issue of the journal Biotropica. Humans appeared in photos from 43 of the 217 different sites in the park where the camera traps were set, even though 78 percent of the park is zoned as a strict nature reserve/primitive area. 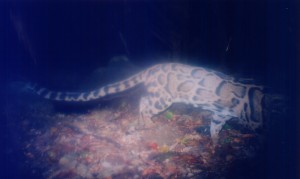 Images: Right, a clouded leopard in a camera trap photo. Above and below: poachers. (Photos courtesy of Kate Jenks)

Attached to trees in the forest, the camera traps use an infrared beam that can detect motion or a change in temperature to trip the camera’s shutter. The researchers considered humans in the snapshots to be “poachers” only if they were carrying a gun, a carcass or animal parts, a bag to carry forest products and animals; or if they were accompanied by a dog, Jenks explains. 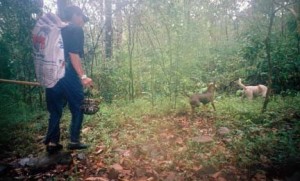 Surprisingly, close analysis of the project’s some 650 photos revealed the presence of poachers very close to Khao Yai’s 21 ranger stations. Few carnivores, such as clouded leopards, were photographed near the stations.

“We expected to find higher carnivore biodiversity near the ranger outposts because those areas should be really well protected,” Leimgruber says. They are not.

In fact, Jenks says, “the ranger stations seem to be having the opposite of their intended effect. Building and staffing the outposts required the construction of roads into the park, which has provided easier access for everyone into the forest.”

This video depicts camera traps being set up in Thailand’s Pang Sida National Park, which is located adjacent to Khao Yai National Park.

In Southeast Asia poaching is fueled by demand from the traditional Chinese medicine trade, trade in wild bush meat for human consumption and forest products the researchers say. In addition, Jenks says, there are villages right up on the boundary of the park with no transition and no buffer zone. It is very easy for villagers to wander into the park.

Jenks, Howard and Leimgruber recommend increased foot patrols by park staff through the forest and continued monitoring of the impact of these foot patrols using the camera traps. Unless the human presence in and impact on the park is reduced, wildlife populations “will only shrink progressively into smaller and smaller core areas of the park” the researchers write.

(JoGayle Howard, a prominent researcher at the National Zoo who had dedicated her life to the study and conservation of endangered species, passed away last year.  She had been instrumental in developing this wildlife conservation project.) –John Barrat