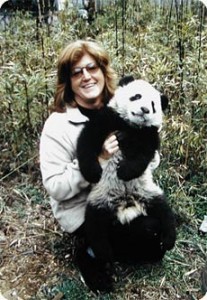 For more than three decades JoGayle Howard dedicated her life and work to reproducing endangered species. Since she arrived at the Smithsonian’s National Zoological Park in 1980 as a freshly graduated veterinarian from Texas A&M University, her intense focus on animal reproduction and her success at pioneering new techniques earned her the title of “Sperm Queen,” a nickname she relished. Throughout her career, she received numerous awards along with international acclaim for her innovative research.

Howard directly contributed to recovering the native American black-footed ferret, a species that was down to its last 18 individuals in the 1980s. With Howard’s oversight, the National Zoo’s black-footed ferret breeding program has flourished with the birth of more than 500 “kits,” including 150 by artificial insemination at the Smithsonian Conservation Biology Institute, near Front Royal, Va. Last year she achieved a milestone when she produced black-footed ferret kits from sperm frozen more than 20 years ago from one of the original wild founders.

Howard played a leadership role in understanding the reproductive biology of the world’s beloved giant panda. She was a key scientist on a multi-institutional team that conducted a biomedical survey of giant pandas in China from 1998 through 2000. Her studies along with Chinese and American colleagues helped identify the causes of poor reproduction in giant pandas living in breeding centers and zoos, which helped contribute to a panda population explosion over the past decade. With Chinese colleagues, she developed new protocols for sperm cryopreservation and artificial insemination. It was Howard who artificially inseminated the National Zoo’s female panda, Mei Xiang, and produced the first surviving cub, Tai Shan, in 2005.

Of the many species studied by Howard, she was most interested in the secretive and beautiful clouded leopard of Southeast Asia. When the breeding program in North American zoos foundered, Howard established a research program in the range country of Thailand. She discovered that the key to reproductive success was improved husbandry, including pairing animals at a young age, ensuring better nutrition and providing more spacious enclosures. More than 50 cubs have resulted while Howard successfully raised funds to initiate some of the first-ever field studies of this elusive species.

Howard traveled extensively, collaborating with and advising zoos and breeding centers throughout the world. Her extensive scientific record includes more than 100 peer-reviewed publications and 20 book chapters. An hour-long special Nature’s Matchmaker, exclusively about Howard, debuts March 13 on the Smithsonian Channel.

Howard died March 5, at 59, in Washington, D.C. from malignant melanoma. Her legacy lives on in the survival of the species that she studied, including the black-footed ferret, giant panda, clouded leopard, cheetah, fishing cat, Florida panther and elephant.