Aided by a recent increase in ocean surface water temperatures, new marine invaders from the Caribbean have been observed spreading northward along the southern and mid-Atlantic coasts of the United States. This northern migration of marine species—called the “Caribbean Creep”—is occurring because many of these non-native species can tolerate a broad range of temperatures. 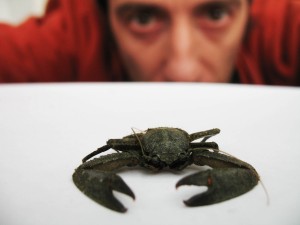 But what happens to these fair-weather travelers during a severe cold snap, such as the one that occurred in January 2010 across much of the southeastern and eastern United States? To investigate, Smithsonian Environmental Research Center scientist João Canning Clode and colleagues at the Environmental Research Center in Edgewater, Md., tested the cold-water tolerances of invasive green porcelain crabs (Petrolisthes armatus) in their laboratory. Crabs were collected in Georgia and brought to the lab where they were subjected to one of three temperature treatments. The first was a control treatment of constant moderate winter temperature. The second was treatment in which the temperature was dropped to mimic the cold snap of January 2010, and the third treatment consisted of the extreme cold temperatures of a severe winter.

The scientists determined that prolonged exposure to cold temperatures also may compromise the green porcelain crab’s ability to overcome cumulative cold events, such as the two other record cold snaps that occurred in February and March of 2010. 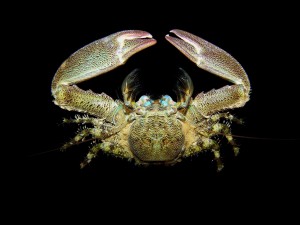 The loss of more than 60% of their population during each cold period might explain the recent dramatic decline of the green porcelain crab in Georgia in 2010, suggesting that extreme cold spells may limit or prevent the northward spread of this invasive species.

Several climate models used to predict how species will react to climate change in the next 100 years have projected a continued decline of global biodiversity and increased spread of introduced species. Many of these models focus on temperature increases, but few have evaluated the impact of severe weather like cold snaps, Canning-Clode and his colleagues write in a paper on their study recently published at PLoS ONE.

For Canning Clode “the core message of this paper is that yes, climate change is happening, but cold is also part of this change. We believe these periodic cold events will limit the range expansion of Petrolisthes armatus as well as other Caribbean creep species” —Monaca Noble, SERC