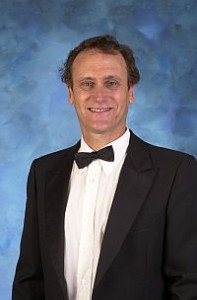 Richard Wunderman is managing editor of the Bulletin of the Global Volcanism Network and a geologist in the Division of Mineral Sciences at the Smithsonian’s National Museum of Natural History. Following the earthquake that rumbled across the East Coast of the United States on Aug. 23, Smithsonianscience.org asked Wunderman a few questions about earthquakes and how scientists measure and assess them. He was assisted by interns Claire Hepper and Robert Dennen.

Q. The earthquake that struck the Washington, D.C. area on Tuesday, Aug. 23, was 5.8 magnitude. Why did the earthquake occur? How do scientists assess earthquake size and impact?

A. The Virginia earthquake released energy stored as accumulated stress in the crust along faults along the coastal side of the Appalachian mountains. The resulting shock waves were felt by people into Canada and Georgia. The main areas of damage were strongest near the epicenter, the point on the Earth’s surface above the earthquake, and minor damage in urban areas at distance, such as Washington D.C. located 85 mi. northeast of the epicenter. 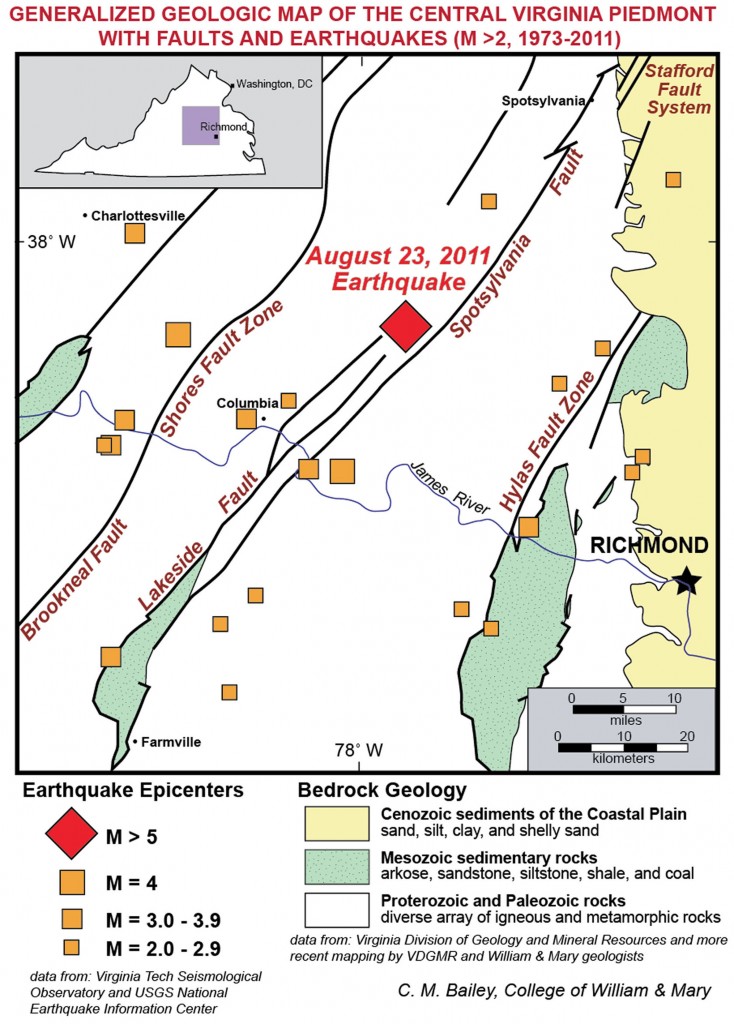 Generalized geologic map showing the location of the M 5.8 EQ of 23 August 2011. The areas in white are ancient rocks of the Appalachian region that transmit seismic energy efficiently. Some other smaller epicenters also shown. Map taken from blog by C.M. Bailey 2011

The cause of the stress is plausibly attributed to factors such as ancient mountain building along the East side of the Appalachian mountains, more recent shifts and adjustments in this region, or from stress developed in more recent times. Virginia’s Division of Geology and Mineral Resources has excellent resources here.

Q. The energy released during the earthquake was stress that had been building up along a fault line in central Virginia for a very long time. Now that this stress has been released, can we relax and not expect another quake for many, many years?

A. Yes, we would assume that along the fault where the earthquake occurred, this might help alleviate another large earthquake there. Trouble is, some of this stress has probably shifted to another area on this or adjacent faults. A complex web of short faults has been mapped in the region.

That being said, the last large earthquake was around 114 years ago, also a magnitude 5.8 quake, so it is seems unlikely that there will be another in the near future. Small earthquakes, which cause little to no damage, have been an almost yearly occurrence in the Virginia seismic area and will likely continue at that recurrence interval.

Q. On Aug. 23, the shaking in Washington, D.C. seemed to last only 20 seconds. Is duration one of the characteristics of an earthquake that is used to measure its magnitude?

A. The size of the earthquake is a potentially confusing topic so I’ll start at a point that everyone can relate to. That is, a general sense of the shaking levels from an earthquake, an estimate called intensity. This measure does not rely on instruments and much in the way of numerical measurements, but addresses the important question of what the shaking actually did.

Yes, the damage could indeed relate to duration of the shaking. And, yes, prolonged duration could spell disaster. Other factors could include the earthquake’s focal depth, its peak accelerations, the kinds of waves generated and their frequencies. Relating to the site, factors include the thickness and kind of crustal material through which the shock waves passed, the local rock and soil types, the slope, and water saturation of the ground. Other critical factors include local rocks and structures such as buildings, bridges, and dams, and how they respond.

Earthquakes can range from not felt and no impact, all the way to leveling large areas, causing secondary effects like substantial tsunamis, landslides, and liquefaction (shaking wet sand, mud, or soils such that it flows, almost like water). The most common intensity scale is the Modified Mercalli scale.

Magnitude, as in an M 5.8 earthquake, represents a scale based on the readings from seismometers and the wave traces we call seismograms. There are various kinds of these magnitude scales (eg. the Richter scale) and the magnitudes are often based on the size of the largest waves received (rather than the duration of the earthquake’s waves).

A simplified illustration of earthquake-triggered waves and the resulting seismogram from a site at distance (at left; tracing time on the x-axis and amplitude on the y-axis). The seismogram contains labels indicating the first arrival of waves; the largest amplitude waves in the case shown are waves traveling along the ground surface called Rayleigh waves. The depiction omits the wave paths moving to the left (as well as some other waves). Taken from Stein and Wysession (2003; their online PowerPoint presentation for Chapter 1 of An Introduction to Earthquakes, Seismology, Earthquakes, and Earth Structure).

The distance from the earthquake and its depth are first calculated, and then the instrument readings at various distances from the epicenter are compensated for, and in fact, there are many corrections and assumptions. These values are often computed from multiple stations using computers. They are often refined somewhat, based on new information and various corrections. Comparisons between intensity and magnitude scales are inexact.

Q. Earthquakes by their very nature are relatively short-lived events, over in a few seconds . . . correct? Or do some earthquakes last a long time?

A. Generally the shaking of the Earth as a result of the fracturing along the fault lasts only a few seconds. That said, in a large earthquake, the propagating waves from the fault rupture can shake for minutes, since for one thing, they come from various parts of the fault and also because the waves reflect (bounce around), actually probing the reaches of the entire planet and providing key clues to the various inner parts of the planet (crust, mantle, and two-part core).

Thick sedimentary valleys and basins such as found in many Western USA settings can behave somewhat like jello, and shake much longer (and stronger, that is, with higher amplitude) than the initial passing waves, essentially amplifying the earthquakes intensity.

Weak vibrations triggered by strong earthquakes may cause the entire planet to ring like a bell at amplitudes and frequencies detected instrumentally but not felt by people. This ringing can go on for weeks in the case of a strong earthquake.

Aftershocks, which are the Earth settling and readjusting, can recur sporadically for weeks to more than a decade after an earthquake has occurred, generally diminishing with time in number and strength.

Q. Much of the structural damage to buildings caused by the Aug. 23 earthquake, it seems, occurred to areas that are high up–cracks at the top of the Washington Monument, the spires of the National Cathedral, and the towers and chimneys of the Smithsonian Castle. Why is that?

A. Hold a stiff fishing pole by the handle and oriented vertically. If you give the handle a shake, the rod’s tip will move as the waves arrive, and excursions there will be comparatively large. Structures made of, or faced with stone, offer special challenges, as the ‘building blocks’ they may not hang together during the deformation and shaking. 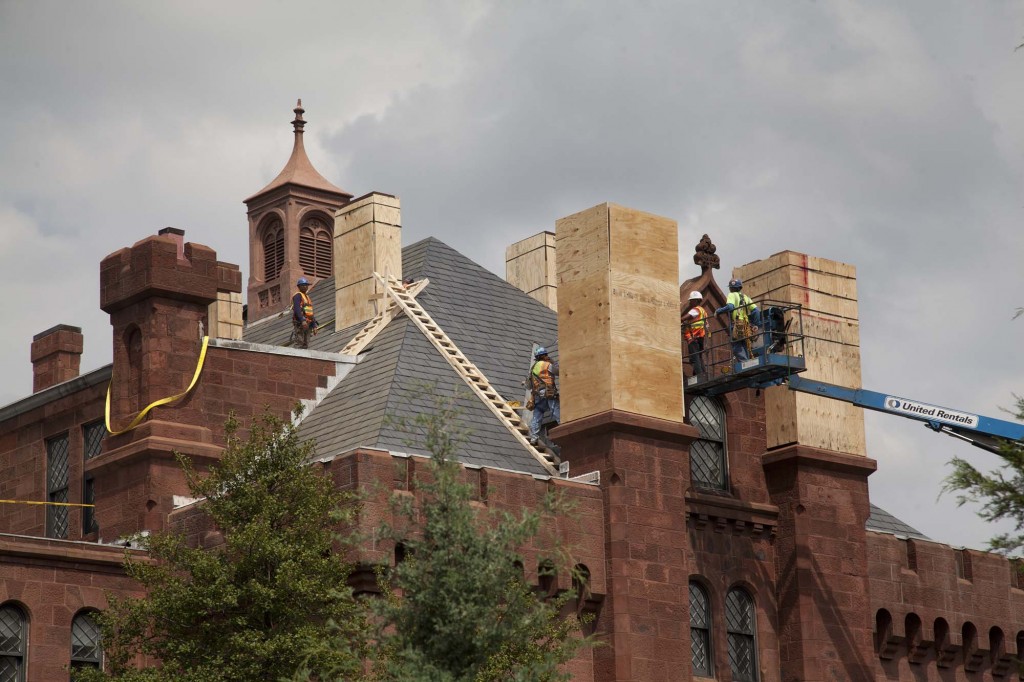 The Aug.23 earthquake caused damage to the chimneys and other high-up structures on the east end of the Smithsonian Castle. (Photos by Mark Avino and Eric Long)

Q. Is there a way to keep track of how much compression or tension is building up between rock plates on either side of a fault line?

A. There are multiple things than can be measured to keep track of offset along a fault over time. Strain meters measure the amount of strain (the movement or deformation caused by stress) present in the ground. Methods employing GPS or radar look at ground-surface deformation. One of my favorite methods is a simple line of survey monuments across arranged across a fault, repeatedly re-surveyed over time. After an earthquake, features such as roads, fences, and railroad tracks can record earthquake offset. You can see other famous examples here. 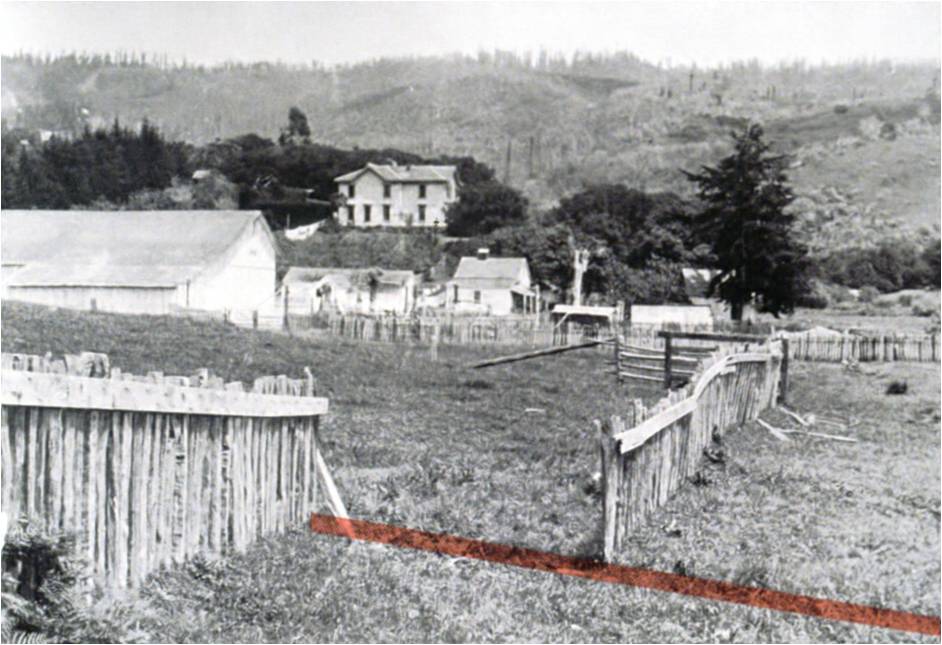 A photo of an offset fence seen soon after the M 7.8 Great San Francisco earthquake of 1906. The San Andreas fault’s surface trace is drawn as a colored band. This area is now part of Point Reyes National Seashore. Image from Stein and Wysession 2003; online PowerPoint presentation.

Q. Where were you when the earthquake struck and what were your immediate thoughts?

A. I was at my desk in the Smithsonian’s Museum of Natural History on the Mall. Shaking grew to the point where it upset me as some of my geologic colleagues screamed and I heard glassware breaking. No one was hurt. In this commotion I had walked from my desk and braced myself in the office doorway, but the shaking stopped soon after that. As the event had escalated, my thoughts went to the building’s masonry construction and the well known, water-saturated fill in this part of the low-lying Washington, D.C. region. Neither of those thoughts were comforting, but the building withstood the stress without serious damage.

My wife and daughter were in the family car stopped at a traffic light when they felt weird unexplained vibrations. My wife immediately asked my daughter ‘What did daddy do to the car now?’ She attributed the vibration to engine or suspension trouble caused by you-know-who. The announcements of the earthquake saved me from near-certain allegations of car abuse.