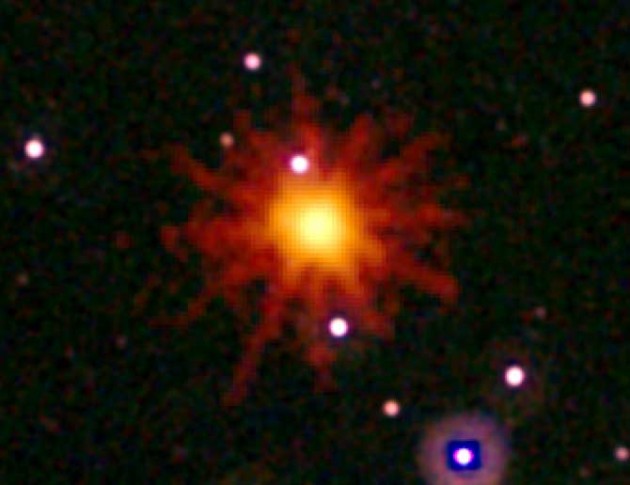 Image from Swift’s Ultraviolet/Optical (white, purple) and X-ray telescopes (yellow and red) were combined in this view of GRB 110328A, which is now known as Sw 1644+57. The blast was detected only in X-rays, which were collected over a 3.4-hour period on March 28. (Credit: NASA/Swift/Stefan Immler)

Two studies appearing in the Aug. 25 issue of the journal Nature provide new insights into a cosmic accident that has been streaming X-rays toward Earth since late March. NASA’s Swift satellite first alerted astronomers to intense and unusual high-energy flares from the new source in the constellation Draco.

“Incredibly, this source is still producing X-rays and may remain bright enough for Swift to observe into next year,” said David Burrows, professor of astronomy at Penn State University and lead scientist for the mission’s X-Ray Telescope instrument. “It behaves unlike anything we’ve seen before.”

Video: On March 28, 2011, NASA’s Swift detected intense X-ray flares thought to be caused by a black hole devouring a star. In one model, illustrated here, a sun-like star on an eccentric orbit plunges too close to its galaxy’s central black hole. About half of the star’s mass feeds an accretion disk around the black hole, which in turn powers a particle jet that beams radiation toward Earth.

Astronomers soon realized the source, known as Swift J1644+57, was the result of a truly extraordinary event — the awakening of a distant galaxy’s dormant black hole as it shredded and consumed a star. The galaxy is so far away, it took the light from the event approximately 3.9 billion years to reach earth.

Burrows’ study included NASA scientists. It highlights the X- and gamma-ray observations from Swift and other detectors, including the Japan-led Monitor of All-sky X-ray Image (MAXI) instrument aboard the International Space Station.

The second study was led by Ashley Zauderer, a post-doctoral fellow at the Harvard-Smithsonian Center for Astrophysics in Cambridge, Mass. It examines the unprecedented outburst through observations from numerous ground-based radio observatories, including the National Radio Astronomy Observatory’s Expanded Very Large Array (EVLA) near Socorro, N.M.

Most galaxies, including our own, possess a central supersized black hole weighing millions of times the sun’s mass. According to the new studies, the black hole in the galaxy hosting Swift J1644+57 may be twice the mass of the four-million-solar-mass black hole in the center of the Milky Way galaxy. As a star falls toward a black hole, it is ripped apart by intense tides. The gas is corralled into a disk that swirls around the black hole and becomes rapidly heated to temperatures of millions of degrees.

The innermost gas in the disk spirals toward the black hole, where rapid motion and magnetism create dual, oppositely directed “funnels” through which some particles may escape. Jets driving matter at velocities greater than 90 percent the speed of light form along the black hole’s spin axis. In the case of Swift J1644+57, one of these jets happened to point straight at Earth.

“The radio emission occurs when the outgoing jet slams into the interstellar environment,” Zauderer explained. “By contrast, the X-rays arise much closer to the black hole, likely near the base of the jet.”

Theoretical studies of tidally disrupted stars suggested they would appear as flares at optical and ultraviolet energies. The brightness and energy of a black hole’s jet is greatly enhanced when viewed head-on. The phenomenon, called relativistic beaming, explains why Swift J1644+57 was seen at X-ray energies and appeared so strikingly luminous.

When first detected March 28, the flares were initially assumed to signal a gamma-ray burst, one of the nearly daily short blasts of high-energy radiation often associated with the death of a massive star and the birth of a black hole in the distant universe. But as the emission continued to brighten and flare, astronomers realized that the most plausible explanation was the tidal disruption of a sun-like star seen as beamed emission.

By March 30, EVLA observations by Zauderer’s team showed a brightening radio source centered on a faint galaxy near Swift’s position for the X-ray flares. These data provided the first conclusive evidence that the galaxy, the radio source and the Swift event were linked.

“Our observations show that the radio-emitting region is still expanding at more than half the speed of light,” said Edo Berger, an associate professor of astrophysics at Harvard and a coauthor of the radio paper. “By tracking this expansion backward in time, we can confirm that the outflow formed at the same time as the Swift X-ray source.”--Source: NASA