New details about the birth of a famous black hole that took place millions of years ago have been uncovered, thanks to a team of scientists who used data from NASA’s Chandra X-ray Observatory as well as from radio, optical and other X-ray telescopes. 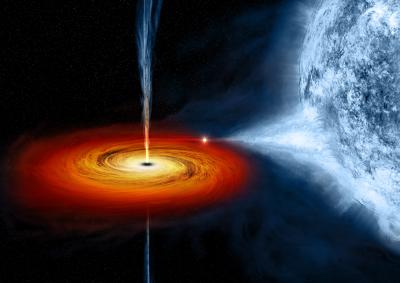 The black hole in Cygnus X-1 is located near large active regions of star formation in the Milky Way. The black hole pulls material from a massive, blue companion star toward it. This material forms a disk (shown in red and orange) that rotates around the black hole before falling into it or being redirected away from the black hole in the form of powerful jets. (Image NASA/CXC/M. Weiss)

Over three decades ago, Stephen Hawking placed — and eventually lost – a bet against the existence of a black hole in Cygnus X-1. Today, astronomers are confident the Cygnus X-1 system contains a black hole, and with these latest studies they have remarkably precise values of its mass, spin, and distance from Earth. With these key pieces of information, the history of the black hole has been reconstructed. 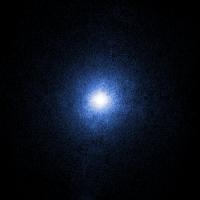 “This new information gives us strong clues about how the black hole was born, what it weighed and how fast it was spinning,” said author Mark Reid of the Harvard-Smithsonian Center for Astrophysics (CfA) in Cambridge, Mass. “This is exciting because not much is known about the birth of black holes.”

Reid led one of three papers — all appearing in the November 10th issue of The Astrophysical Journal — describing these new results on Cygnus X-1. The other papers were led by Jerome Orosz from San Diego State University and Lijun Gou, also from CfA.

Cygnus X-1 is a so-called stellar-mass black hole, a class of black holes that comes from the collapse of a massive star. The black hole is in close orbit with a massive, blue companion star.

Using X-ray data from Chandra, the Rossi X-ray Timing Explorer, and the Advanced Satellite for Cosmology and Astrophysics, a team of scientists was able to determine the spin of Cygnus X-1 with unprecedented accuracy, showing that the black hole is spinning at very close to its maximum rate. Its event horizon — the point of no return for material falling towards a black hole — is spinning around more than 800 times a second.

An independent study that compared the evolutionary history of the companion star with theoretical models indicates that the black hole was born some 6 million years ago. In this relatively short time (in astronomical terms), the black hole could not have pulled in enough gas to ramp up its spin very much. The implication is that Cygnus X-1 was likely born spinning very quickly.

Using optical observations of the companion star and its motion around its unseen companion, the team made the most precise determination ever for the mass of Cygnus X-1, of 14.8 times the mass of the Sun. It was likely to have been almost this massive at birth, because of lack of time for it to grow appreciably.

“We now know that Cygnus X-1 is one of the most massive stellar black holes in the Galaxy,” said Orosz. “And, it’s spinning as fast as any black hole we’ve ever seen.”

Knowledge of the mass, spin and charge gives a complete description of a black hole, according to the so-called “No Hair” theorem. This theory postulates that all other information aside from these parameters is lost for eternity behind the event horizon. The charge for an astronomical black hole is expected to be almost zero, so only the mass and spin are needed.

“It is amazing to me that we have a complete description of this asteroid-sized object that is thousands of light years away,” said Gou. “This means astronomers have a more complete understanding of this black hole than any other in our Galaxy.”

The team also announced that they have made the most accurate distance estimate yet of Cygnus X-1 using the National Radio Observatory’s Very Long Baseline Array (VLBA). The new distance is about 6,070 light years from Earth. This accurate distance was a crucial ingredient for making the precise mass and spin determinations.

The radio observations also measured the motion of Cygnus X-1 through space, and this was combined with its measured velocity to give the three-dimensional velocity and position of the black hole.

This work showed that Cygnus X-1 is moving very slowly with respect to the Milky Way, implying it did not receive a large “kick” at birth. This supports an earlier conjecture that Cygnus X-1 was not born in a supernova, but instead may have resulted from the dark collapse of a progenitor star without an explosion. The progenitor of Cygnus X-1 was likely an extremely massive star, which initially had a mass greater than about 100 times the sun before losing it in a vigorous stellar wind.

In 1974, soon after Cygnus X-1 became a good candidate for a black hole, Stephen Hawking placed a bet with fellow astrophysicist Kip Thorne, a professor of theoretical physics at the California Institute of Technology, that Cygnus X-1 did not contain a black hole. This was treated as an insurance policy by Hawking, who had done a lot of work on black holes and general relativity.

By 1990, however, much more work on Cygnus X-1 had strengthened the evidence for it being a black hole. With the help of family, nurses, and friends, Hawking broke into Thorne’s office, found the framed bet, and conceded.

“For forty years, Cygnus X-1 has been the iconic example of a black hole. However, despite Hawking’s concession, I have never been completely convinced that it really does contain a black hole — until now,” said Thorne. “The data and modeling described in these three papers at last provide a completely definitive description of this binary system.”