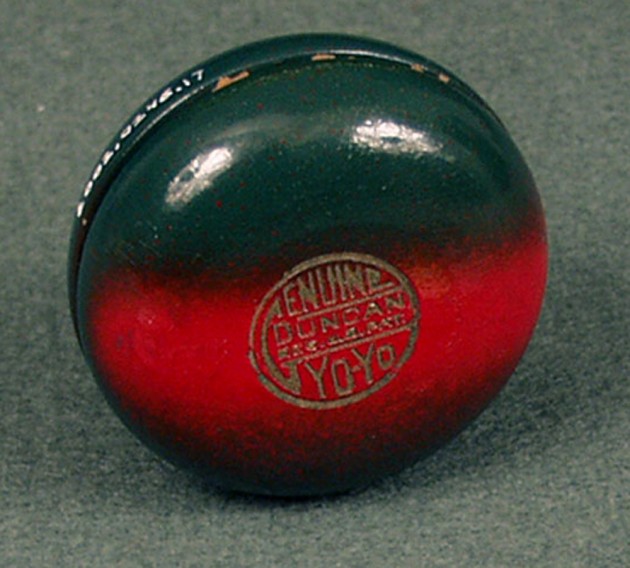 America owes its fascination with the yo-yo mainly to Chicago businessman Donald F. Duncan Sr., who spotted it while on a business trip to San Francisco in 1928. It was being used by Pedro Flores, a Philippine immigrant who began selling a toy labeled with the name, “yo-yo,” meaning “come-come” in the native language of the Philippines.

By early 1929, Flores had secured financing, set up his own firm and manufactured more than 100,000 wooden toys and trademarketed the name “yo-yo.” Flores realized that people had to be shown how to use a yo-yo before they would buy it. He hired a team of fellow yo-yo masters to demonstrate the toy’s amazing tricks.

Duncan, a marketer, entrepreneur and manufacturer of wooden novelty items and toys, immediately recognized the yo-yo’s potential as a popular new toy. He quickly raised $5,000 to purchase initial rights to the yo-yo from Flores and founded Donald F. Duncan Inc. By October 1932, he had secured Flores’s remaining assets, including the all-important trademark. Until the trademark expired in 1965 and competing plastic yo-yos began to outsell his old-fashioned, wooden ones, Duncan was the country’s leading yo-yo producer.

This wooden yo-yo was made by the Duncan Toys Company in the 1930s. It has a green design with a broad red stripe. The seal reads “Genuine Duncan Yo-Yo, Reg. US Pat.” This was an early version of the Duncan Genuine Yo-Yo, produced soon after Duncan bought the trademark term “yo-yo” from Flores. This yo-yo’s seal is reminiscent of the one used by Flores.