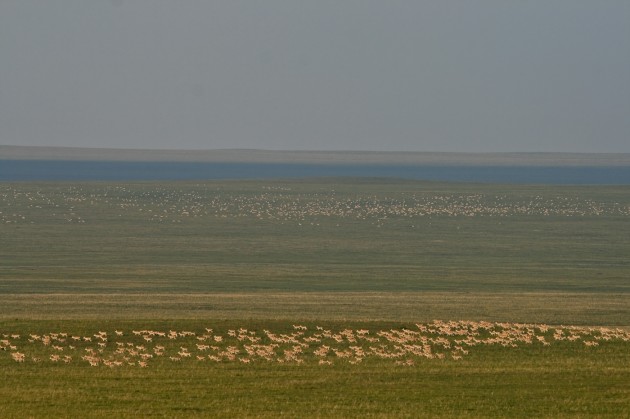 Gazelle photos above and below by Thomas Mueller, Smithsonian Conservation Biology Institute.

The predictability and scale of seasonal changes in a habitat help determine the distance migratory species move and whether the animals always travel together to the same place or independently to different locations, according to a paper published recently in Global Ecology and Biogeography by the National Zoo’s Smithsonian Conservation Biology Institute researchers and partners. The study’s findings have significant implications for land managers around the world working to conserve endangered species that migrate.

“We knew that Mongolian gazelle in the Eastern Steppes migrate long distances, but when we put radio collars on them, we were surprised to discover that they go off individually in different directions,” said Thomas Mueller, a research associate at SCBI and lead author of the study. “Previously researchers had not paid much attention to how individual animals that migrate long distances move relative to one another.”

The researchers compared how Mongolian gazelle migrate to the movement of three other ungulate species: guanaco in the Patagonian Steppes in Argentina, caribou in the arctic tundra of Canada and Alaska and moose in temperate forests in Massachusetts. SCBI’s primary role in collaboration with University of Maryland was to provide the remote tracking technology and statistical analysis, while other partners organized and executed the field work in each of the areas. 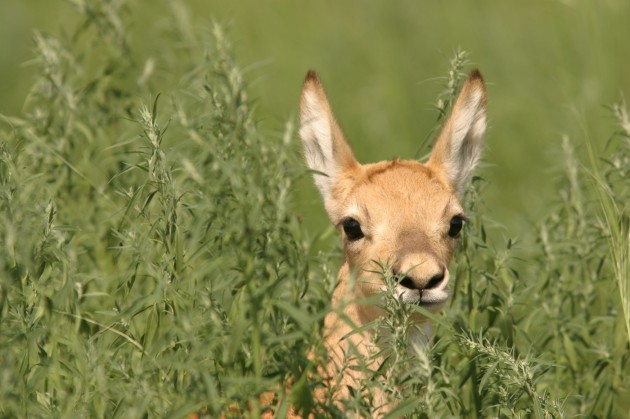 After determining how far each species migrated and whether individuals moved together or independently from each other in different directions, the scientists compared these results to 25 years of satellite data from the National Oceanic and Atmospheric Administration showing seasonal and annual changes in landscape dynamics. They found that the species that moved the largest distances (caribou and gazelle) live in areas where vegetation (their food source) varies over large scales, while those that moved shorter distances (guanaco and moose) live in areas where the vegetation varies at a much smaller scale. They also found that Mongolian gazelles, which move independently in different directions compared to one another other, live in habitats with the least predictable landscape dynamics.

“What this indicates is that while it may be appropriate to put barriers around landscapes where endangered species stay in herds as they migrate, species that migrate long distances as individuals require conservation strategies that facilitate long-distance movements across the entire landscape,” said Scott Derrickson, deputy director of SCBI. “We now know some of the landscape factors that we can look at to determine the best way to manage habitat for endangered or threatened species.”

SCBI will spearhead the next steps in the research: expanding the number of species and the number of study regions and refining the statistical methods quantifying how individuals move relative to one another. The researchers also want to understand how the animals know how to navigate the landscapes—whether through memory or through other sensory mechanisms—and if those mechanisms differ between the species that migrate as herds or as individuals.

The paper’s authors from SCBI are Mueller, Peter Leimgruber and Justin Calabrese.