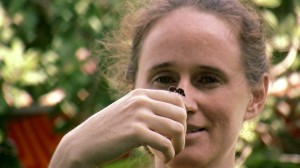 Her research is critical in the fight to protect agricultural crops from heavy destruction from these insects. By examining the types of fungi leaf cutter ants are attracted to and those they are not, Van Bael hopes to help find solutions for those in the farming industry.

Johnny Gibbons and Brian Ireley of the Smithsonian’s Office of Public Affairs met up with Van Bael at the Tropical Research Institute in Panama on Thursday, Jan. 13, 2011, for a personal tour of her labs, which contain a number of ant colonies nurturing their fungi food. She took time out of her busy schedule to sit down for a video interview and explain the process and importance of her team’s work. Check this Web site for Van Bael’s and other video interviews with Tropical Research Institute scientists beginning next week. 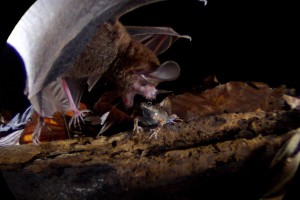 Image left: A tropical bat locates its frog prey by listening to the frog’s mating call (Photo by Christian Ziegler)

Later on Thursday,  Gibbons and Ireley met up with Tropical Research Institute scientist Rachel Page to hear more about her research into the hunting techniques of the fringe-lipped bat in Panama. The bat mostly feeds on the tungara frog, which it locates by listening for the male frog’s mating call. Rachel has found that the frog faces a major conundrum: the louder it sings, the more successful it may be in attracting a mate, but also a predator.

Rachel and her team use speakers emitting frog calls in a flight cage with live bats in their labs to better understand the relationships between predator and prey. There are times that the bats are so attracted by the calls that they will attempt to fly off with the speakers. Next week a video interview with Page and other Smithsonian scientists in Panama will be  available on Smithsonianscience.org