A team of scientists led by Harvard-Smithsonian Center for Astrophysics astronomer Jaime Pineda has managed to get a clearer look into the turbulent and murky environment of a stellar nursery in the constellation Perseus. The result is the first observation ever of a critical step in the creation of stars. 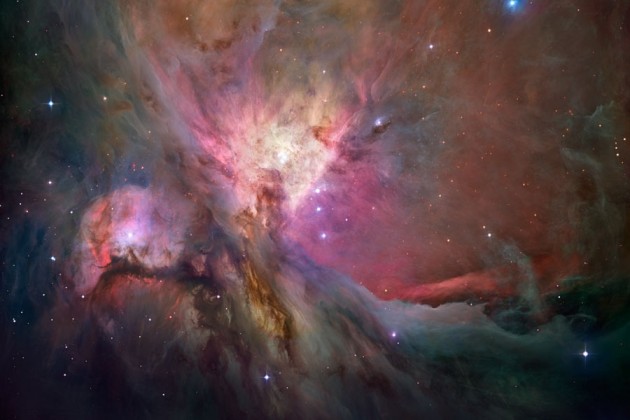 The Orion Nebula is the most famous stellar nursery in the northern sky. Its young stars are fully mature, while the Perseus region is still at the earliest stages of star formation. (Photo NASA/ESA)

Understanding star formation is a key quest in astronomy. Theorists have models for the process, but as with all sciences, observations must be made to support or modify these ideas.

Stars form inside relatively dense concentrations of interstellar gas and dust called molecular clouds. Within such clouds, material roils and bubbles like a boiling soup. For a time, the energy of those turbulent motions supports the cloud against gravitational collapse. Eventually, gravity begins pulling denser parts of the cloud interior together. When the material inside these clumps loses enough internal motion, they condense into cores. These cores then form into protostars.

“The dust and gas molecules have to slow down enough for gravity to begin pulling them together into a protostar,” Pineda says. “So far it has been hard to tell which cloud material is going into a protostar and which material is still too energetic.”

Since the molecular clouds do not shine in visible light, astronomers must use radio and infrared telescopes to make measurements. Using the 100-meter Byrd radio telescope in Green Bank, WV, to map temperature and motion in the cloud, Pineda and other team members have for the first time determined a sharp boundary surrounding a protostar.

“This result lets us define a zone where material inside the boundary is ‘ready to be used’ in the star formation process, while the gas outside the boundary needs to get rid of the turbulence before it can go on to form a star,” says Pineda.

Theory predicts a region around a protostar where the forming star’s gravity is slowing and capturing more and more material from the parent cloud. The actual size and shape of such a region has not been measured or accurately predicted before.

What was completely unknown was whether or not the material made a gradual or abrupt transition into what co-author Alyssa Goodman describes as “islands of calm in a more turbulent sea.”

“The identification of this sharp transition is a major breakthrough in understanding the star formation process,” says Pineda. “Our measurements now give a strong constraint on how these protostellar cores form.”

Because this is the first observation of such a marked transition, it had not previously been described in theory. “Now theorists will need to reproduce our observations in order to keep their models viable,” Pineda says.  –Dan Brocious