These laser-scanned digital maps of a gorilla’s teeth visualize shape, orientation and slope information. By charting the slopes and crags on animals’ teeth as if they were mountain ranges, scientists at the Smithsonian’s National Museum of Natural History have created a powerful new way to learn about the diets of extinct animals from the fossil record. (Images courtesy Silvia Pineda-Munoz)

By charting the slopes and crags on animals’ teeth as if they were mountain ranges, scientists at the Smithsonian’s National Museum of Natural History have created a powerful new way to learn about the diets of extinct animals from the fossil record.

Understanding the diets of animals that lived long ago can tell researchers about the environments they lived in and help them piece together a picture of how the planet has changed over deep time. The new quantitative approach to analyzing dentition, reported Nov. 21 in the journal Methods in Ecology and Evolution, will also give researchers a clearer picture of how animals evolve in response to changes in their environment.

“The new method gives researchers a way to measure changes that arose as animals adapted to environments altered by mass extinctions or major climate shifts,” said Smithsonian paleontologist Sílvia Pineda-Munoz, who led the technique’s development. “By using shape algorithms to examine teeth before and after these perturbations, we can understand the morphological adaptations that happen when there is an [environmental] change. That in turn can help researchers and conservationists predict and plan for such events in the future. It is another tool we can use to understand how present-day communities are going to be affected if something like that happens now.” 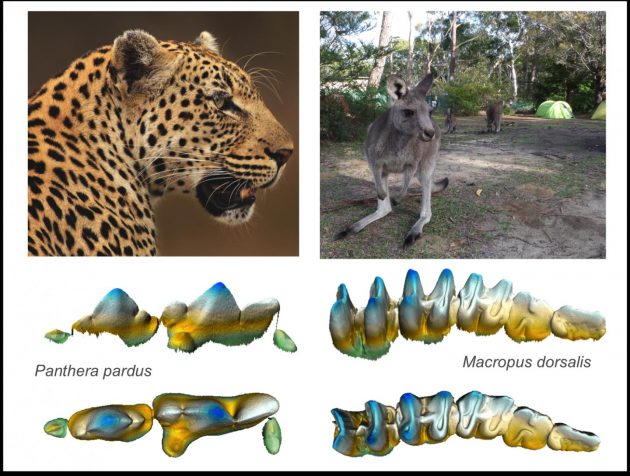 These laser-scanned digital maps of a cheetah and kangaroo’s teeth visualize information about elevation.

Pineda-Munoz is a postdoctoral fellow in the Natural History Museum’s Evolution of Terrestrial Ecosystems Program, which brings together researchers from different disciplines to investigate how terrestrial ecosystems are structured and how they have changed over geologic time. She developed the new method of determining an animal’s diet in collaboration with colleagues at Arizona State University, Macquarie University, Monash University and the Museum Victoria in Melbourne.

Paleobiologists have long compared the shapes of fossil teeth to those of existing animals to make inferences about what prehistoric species ate millions of years ago. The new method builds on this approach but is more informative and precise, computationally comparing the surfaces of an animal’s teeth with those of more than 130 present-day mammals.

The technique relies on a three-dimensional scan of a set of teeth, which generates a digital model resembling a topographic map of the Earth’s surface. GIS (geographic information system) technology is used to analyze the map, mathematically describing several key features that influence how teeth process food. For example, the program measures how often the slope of tooth surfaces change–an indicator of complexity. Diets made up of foods that require a lot of mechanical processing before they are digested, like tough vegetation, are associated with more complex dentition, Pineda-Munoz explains.

While she was a graduate student at Macquarie University, Pineda-Munoz mapped the teeth of 134 contemporary mammals, including representatives from each of eight different dietary categories.

Pineda-Munoz and her colleagues created a database recording six measurable features of tooth topology for the top and bottom sets of teeth from present-day mammals. Variations in those features reflected differences in the animals’ diets. For example, pandas, whose teeth must crush tough leaves, have the most complex teeth, whereas hyenas’ scissor-like teeth are efficient for tearing meat.

To determine what types of food extinct animals were best equipped to eat, researchers can scan teeth from the fossil record and mathematically compare how their shapes relate to the teeth of animals with known diets–an approach similar to the algorithms websites use to predict what related content a user will enjoy based on past favorites.

“Because the method precisely measures the shape of teeth, it will be valuable in assessing how animals’ teeth have changed over the course of evolution,” Pineda-Munoz said. “It’s a method that looks at evolutionary change. It tells you not just what the animal was eating at this point in time, but what the animal was adapted to eating.”

Disclaimer: AAAS and EurekAlert! are not responsible for the accuracy of news re