Austin, TX – The stars we see today weren’t always as serene as they appear, floating alone in the dark of night. Most stars grew up in cosmic turmoil, as illustrated in a new image from NASA’s Spitzer Space Telescope.

The image shows one of the most active and turbulent regions of star birth in our galaxy, a region called Cygnus X. The choppy cloud of gas and dust lies 4,500 light-years away in the constellation Cygnus the Swan. 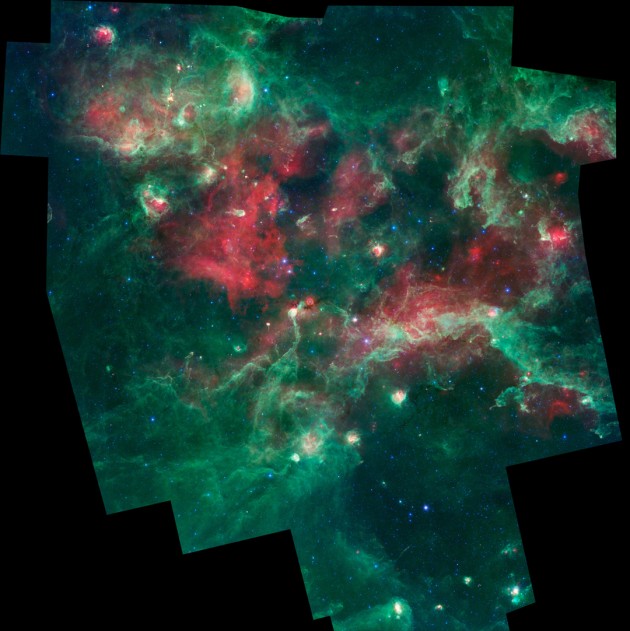 Cygnus X, which spans an area of the sky larger than 100 full moons, is home to thousands of massive stars, and many more stars around the size of our sun or smaller. Spitzer has captured an infrared view of the entire region, which is bubbling with star formation.

“Spitzer captured the range of activities happening in this violent cloud of stellar birth,” said Joe Hora of the Harvard-Smithsonian Center for Astrophysics, who is the principal investigator of the research. “We see bubbles carved out from massive stars, pillars of new stars, dark filaments lined with stellar embryos and more.”

The majority of stars are thought to form in huge star-forming regions like Cygnus X. Over time, the stars dissipate and migrate away from each other. It’s possible that our sun was once packed tightly together with other, more massive stars in a similarly chaotic, though less extreme, region.

The turbulent star-forming clouds are marked with bubbles, or cavities, which are carved out by radiation and winds from the most massive of stars. Those massive stars tear the cloud material to shreds, terminating the formation of some stars, while triggering the birth of others.

“One of the questions we want to answer is how such a violent process can lead to both the death and birth of new stars,” said Sean Carey, a team member from NASA’s Spitzer Science Center at the California Institute of Technology.

Infrared data from Spitzer is helping to answer questions like these by giving astronomers a window into the dustier parts of the complex. Infrared light travels through dust, whereas visible light is blocked. For example, embryonic stars blanketed by dust pop out in the Spitzer observations. In some cases the young stars are embedded in finger-shaped pillars of dust. In other cases, these stars can be seen lining very dark, snake-like filaments of thick dust.