As atmospheric carbon dioxide levels rise, so does the pressure on the plant kingdom. The hope among policymakers, scientists and concerned citizens is that plants will absorb some of the extra CO2 and mitigate the impacts of climate change. For a few decades now, researchers have hypothesized about one major roadblock: nitrogen. 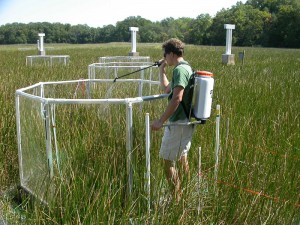 Photo right: Scientist Adam Langley sprays plants in a test chamber with nitrogen. The additional nutrients changed the composition of the plants inside the chamber, spurring the growth of grasses that respond weakly to elevated levels of CO2.

Plants build their tissue primarily with the CO2 they take up from the atmosphere. The more they get, the faster they tend to grow—a phenomenon known as the “CO2 fertilization effect.” However, plants that photosynthesize greater amounts of CO2 will also need higher doses of other key building blocks, especially nitrogen. The general consensus has been that if plants get more nitrogen, there will be a larger CO2 fertilization effect. Not necessarily so, says a new paper published in the July 1 issue of Nature.

Adam Langley and Pat Megonigal, two ecologists at the Smithsonian Environmental Research Center, conducted a four-year study on plants growing in a brackish Chesapeake Bay marsh. In 2006 they began feeding sedge-dominated plots a diet rich in CO2 and nitrogen. Just as atmospheric CO2 levels are rising, so is nitrogen pollution in estuaries due farming, wastewater treatment and other activities. Because the sedge has previously shown a large CO2 fertilization effect, Langley and Megonigal expected that adding nitrogen could only enhance it. 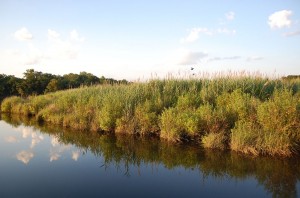 Photo left: The Smithsonian’s Global Change Research Marsh is a tidal system. It sits on the western shore of the Chesapeake Bay in Edgewater, Maryland.

The sedge, Schoenoplectus americanus, initially reacted as expected. However, after the first year something unanticipated happened. Two grass species that had been relatively rare in the plots, Spartina patens and Distichlis spicata, began to respond vigorously to the excess nitrogen. Eventually the grasses became much more abundant. Unlike sedges, grasses respond weakly to extra CO2 and do not grow faster. Thus, the nitrogen ultimately changed the composition of the ecosystem as well as its capacity to store carbon.

The experiment unfolded on the Smithsonian Global Change Research Wetland, located on the Chesapeake’s western shore in Maryland. The Smithsonian site has a history of climate change research that dates back to the 1980s. For this study, Megonigal and Langley placed 20 open-top chambers over random plots of plants. The chambers were 6 feet in diameter and had 5-foot-tall transparent plastic walls. 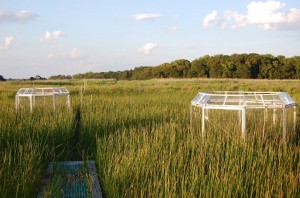 Photo right: Open-top plastic chambers allow Smithsonian researchers to control and measure the amount of carbon dioxide and nitrogen that the plants receive.

The large, plastic pods allowed the scientists to manipulate CO2 concentrations in the air and nitrogen levels in the soil. Half of the plots grew with normal, background CO2 levels; the other half were raised in an environment with CO2 concentrations roughly double that amount. Similarly, half of the chambers were fertilized with nitrogen and the other half were untreated.

Langley and Megonigal began and ended each growing season with a census of the plants in each chamber. They noted the individual plant species, measured the above-ground biomass and the root growth. In the chambers that received the high-nitrogen diet, the plant composition changed dramatically; it went from 95 percent sedge in 2005 to roughly half grass in 2009. “It’s a fact that not all plants will be able to respond optimally to all changes,” said Megonigal. “The things they do respond to reflects their strategy for making a living in the environment.”

“The study underscores the importance of considering the mix of species when you’re trying to predict how terrestrial ecosystems will react to global climate change factors,” said Langley. Rising CO2 levels will favor some plants and excess nitrogen will favor others. This lesson will be important to understand as scientists consider additional global change factors such as precipitation, temperature and, in tidal wetlands, sea-level rise. The plant species that gain a competitive edge under these evolving conditions will determine how ecosystems respond to global change.

This study was supported by the U.S. Geological Survey and U.S. Department of Energy. The Smithsonian scientists recently received funding from the National Science Foundation that will sustain the research for another 10 years. Langley and Megonigal’s paper, “Ecosystem Response to Elevated CO2 Limited by
Nitrogen-Induced Plant Species Shift,” can be accessed on Nature’s website https://www.nature.com/nature/journal/v466/n7302/full/nature09176.html.