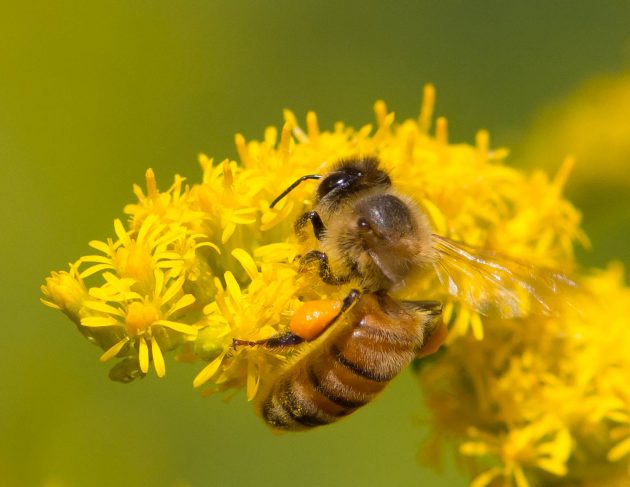 A honeybee getting nectar and pollen from goldenrod in southern Michigan. The pollen is the orange substance attached to the bee’s leg. (Flickr image by Steve Burt)

Unless you’ve been living under a rock for the last few years, you’ve doubtless caught at least a passing reference to the plight of the beleaguered bee. Bees of all types pollinate an estimated 75 percent of our fruit, nut and vegetable crops, and they’ve been suffering population declines in recent years from a variety of suspected sources. These die-offs are a major concern to farmers and hobby beekeepers, as well as anyone who likes to eat.

Bees like food, too, but a new study led by the U.S. Department of Agriculture’s  Agricultural Research Service has found that recent increases in carbon dioxide emissions over the last several decades have made a key autumnal food source less nutritious than in the past. This adds one more potential factor to the cocktail of stressors making bees vulnerable to attack by pests, pathogens and pesticides.

USDA Agricultural Research Service plant physiologist Lewis Ziska, together with colleagues from Purdue University, Williams College and the Smithsonian compared the protein content of pollen from historic specimens of Canada goldenrod (Solidago canadensis) from the U.S. National Herbarium collection at the Smithsonian’s National Museum of Natural History with pollen from field trials simulating varying levels of atmospheric carbon dioxide. They found that as CO2 levels increased, the protein content of the pollen decreased.

Three of the many historical goldenrod records kept in the U.S. National Herbarium at the Smithsonian’s National Museum of Natural History. These plants were collected in Arizona, Florida and Alabama (left to right). Goldenrod samples in this herbarium were used to measure how rising atmospheric CO2 has impacted protein in pollen. (Photo courtesy Smithsonian’s National Museum of Natural History)

Goldenrod, which blooms from July through October across most of North America, is one of the most widely available sources of pollen for late-year foraging. Though nectar is bees’ main food source during the warmer months, bees need the fats, vitamins and minerals from pollen protein to make it through the winter. Because they only store small amounts of it, fluctuations in the amount or quality of the pollen itself can directly affect bee health.

“Goldenrod was the focus because it’s the last source of pollen for bees before they overwinter,” Ziska says. “Whatever happens to goldenrod in the fall can be a harbinger of overall bee health and their ability to survive until spring.”

How rising CO2 affects insects’ food sources has never been investigated in much depth, despite more than 100 such studies on human food sources suggesting the same kind of impact, Ziska said. Using Smithsonian herbarium samples dating from 1842 through to 1998, as well as more recently collected samples from other sources, Ziska found that pollen protein content has declined by about one third since 1960, from 18 to 12 percent. 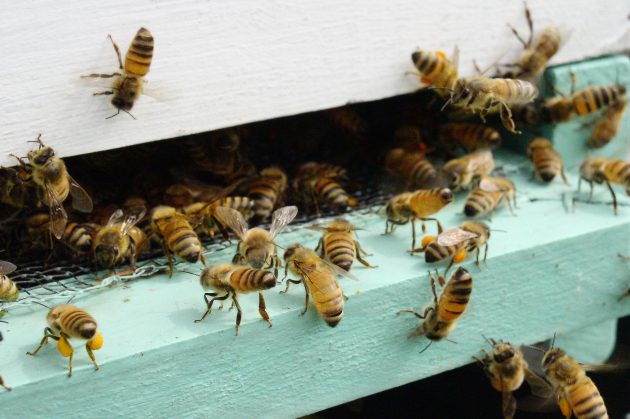 A field experiment that simulated a similar range of CO2 exposures, but included future CO2 concentrations up to 500 parts per million (ppm) confirmed the herbarium results.  Still, as Ziska pointed out, it’s not clear if there’s an upper limit to the effect, or if the protein content will eventually stabilize regardless of the CO2 concentration in the atmosphere.

The silver lining to the study, he said, is that commercial and hobby honeybee keepers may be able to counteract any nutritional deficiencies by supplying additional protein late in the fall.  How to ameliorate the impact on wild, solitary bees is, however, unclear.

“We wanted to conduct a robust study by looking at both the historical record and field experiments,” Ziska says.  Though he started out by visiting herbariums around the world, including in Australia, the Smithsonian’s herbarium “has by far the best and most diverse set of herbarium samples for studying long term climate effects,” he adds.

Andrew Clark, who now works for the USDA but at the time of the study was an Smithsonian herbarium collections specialist guiding Ziska through the Solidago specimens, says that the use of goldenrod in this way is a fairly novel approach to the kinds of research typically conducted with herbariums. Pollen studies, for example, aren’t done very often any more, and typically focus on the structure of the pollen itself to aid in plant family classification.

“The Smithsonian herbarium goes right to the heart of America’s past, because when it started our first collections were from people like Lewis and Clark, frontiersmen who were identifying what was unique to America. No European had seen what was there,” Clark said. “It’s a very clear snapshot of what our natural environment looked like at that time.”

Whether or not the bees will be able to adjust to a degraded pollen source is still in unclear.

“As with most biological organisms, there is some capacity for adaptation, but how much is an open question,” Ziska paused, then continued. “I often read where ‘CO2 is plant food’, but that simple meme falls short of understanding the complexity of CO2 in plant biology. I suspect that plant pollinators are just the tip of the iceberg—or flower.”