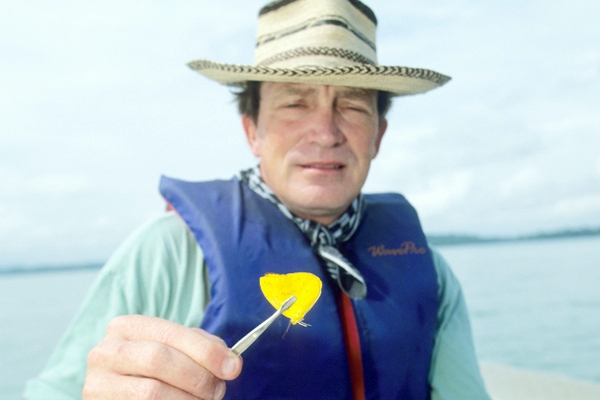 A new census of tropical sulfur butterflies (Aphrissa statira) migrating across the Panama Canal has revealed the central role that weather plays in determining why populations of these lemon-yellow insects vary from year to year. Over the 16-year period of the study, researchers observed that sulfur butterfly numbers spiked in the years with a dry spring. Too much sunlight and not enough water, they determined, limits leaf growth in the canopy trees of the rainforest. As a result, the tropical liana vines upon which the butterflies feed and lay their eggs get more sunlight and respond with an increase in early leaf growth. Vigorous spring growth in the liana vines means more food and egg-laying surfaces for the butterflies, and thus more butterflies.

During the course of the study Robert Srygley, a post doctoral fellow at the Smithsonian Tropical Research Institute who is now an ecologist at the U.S. Department of Agriculture’s Agricultural Research Service, and his colleagues counted yellow sulfur butterflies as they migrated across central Panama from Atlantic coastal rainforests to the drier forests of the Pacific coast. So the butterflies could be seen clearly and for an extended period, the census was conducted from a boat in the Panama Canal as the butterflies crossed the canal. 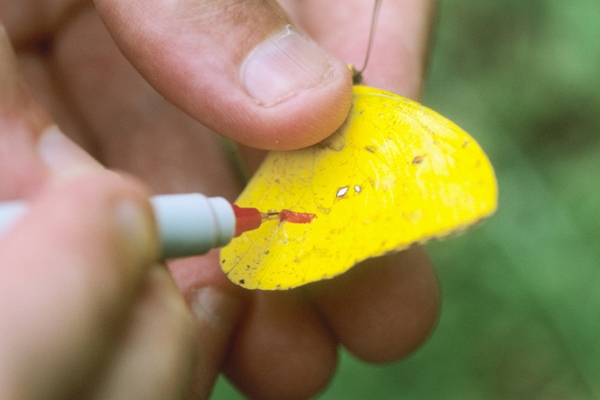 Photo: A butterfly being marked during the census. (Photos by Christian Ziegler)

The El Niño Southern Oscillation, a global climate cycle, helped the researchers reach their conclusion. Drier springs caused by the El Niño led to visible vitality in the liana vines that the butterfly larvae eat. “When the liana prosper, we see a big jump in the number of Statira sulfur butterflies,” Srygley says.

Climate has been linked to changes in the migration of butterflies in North America and Europe but until this study, “we knew practically nothing about the environmental factors driving the long-distance migration of tropical butterflies,” Srygley says.

According to Srygley, “Understanding how global climate cycles and local weather influence tropical insect migrations should ultimately improve our ability to predict insect movements and effects such as crop damage.” The results of this study was recently published in the journal Global Change Biology. —John Barrat