Scientists at the Smithsonian Institution examined the feather remains from the Jan. 15, 2009, US Airways Flight 1549 bird strike to determine not only the species, but also that the Canada geese involved were from a migratory, rather than resident, population. This knowledge is essential for wildlife professionals to develop policies and techniques that will reduce the risk of future collisions. The team’s findings were published in the journal “Frontiers in Ecology and the Environment” in June. 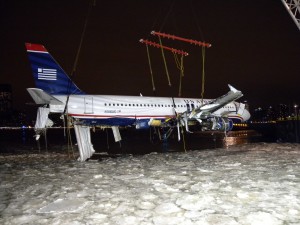 Photo: A crane lifts US Airways Flight 1549 from the Hudson River in lower Manhattan on Jan. 17, 2009. Two days earlier it had crash-landed in the river after colliding with a flock of geese.

The US Airways plane took off from New York’s LaGuardia Airport, colliding with a flock of geese approximately 2,900 feet above the ground, extensively damaging both engines five miles from the airport. The pilot conducted an emergency landing in the Hudson River, and all 155 people on board survived with only a few serious injuries. Investigators at the National Transportation Safety Board later sent feathers and tissue extracted from the plane’s engines to the Smithsonian in Washington, D.C., for analysis.

Researchers in the Feather Identification Laboratory at the Smithsonian’s National Museum of Natural History used molecular genetic techniques and feather samples from museum collections, as well as a technique developed for rapid species identification with small genetic samples called DNA barcoding, to determine that the birds involved were Canada geese (Branta canadensis). This is one of the largest species of birds in North America. The birds involved are estimated to have weighed about 8 pounds each. 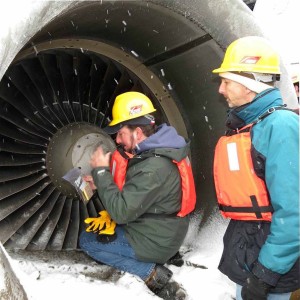 Photo: An investigator from the National Transportation Saftey Board removes bird remains from one of the jet engines of US Airways Flight 1549. The remains, analyzed by Smithsonain scientists, were determined to be from migratory Canada geese from the Labrador region. (Photos courtesy NTSB)

The next step for the scientists was to find out if these geese were migratory or non-migratory (resident) birds. “Determining whether these birds were migratory or not was critical to our research and will help inform future methods of reducing bird strikes,” says Peter Marra, research scientist at the Smithsonian’s Migratory Bird Center located at the National Zoological Park, and lead author of the project’s paper. “Resident birds near airports may be managed by population reduction, habitat modification, harassment or removal, but migratory populations require more elaborate techniques in order to monitor bird movements.”

The team took their research to a molecular level at the Smithsonian’s Museum Conservation Institute labs in Suitland, Md., where experts examined stable-hydrogen isotopes from the feathers to confirm whether the geese were from resident or migratory populations. Stable-hydrogen isotope values in feathers can serve as geographic markers since they reflect the types of vegetation in the bird’s diet at the time it grew new feathers after molting. Using a mass spectrometer, which measures the masses and relative concentrations of atoms and molecules at high precision, Museum Conservation Institute scientists compared the bird-strike feather samples with samples from migratory Canada geese and from resident geese close to LaGuardia Airport. Their analysis revealed that the isotope values of the geese involved in the crash of Flight 1549 were most similar to migratory Canada geese from the Labrador region and significantly different from feathers collected from Canada geese living in the New York City region.

“Knowing the frequency and timing of collisions is important,” Marra says. “Otherwise we are missing valuable information that could reveal patterns of frequency, location and the species involved.”