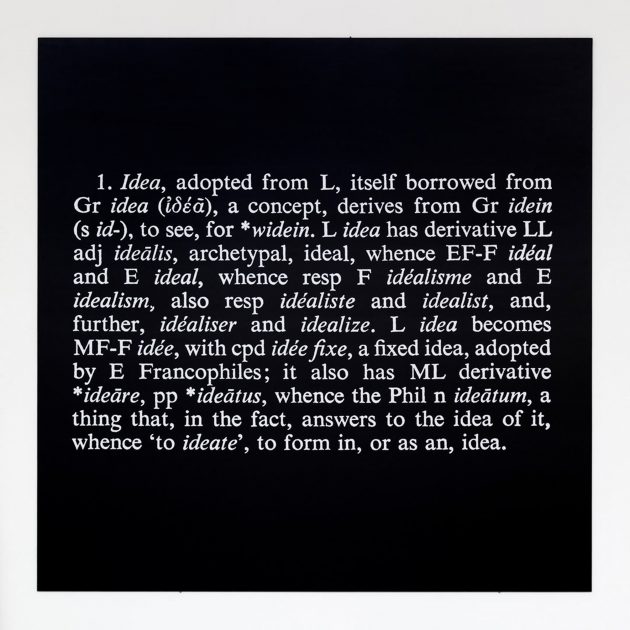 How does an artist portray the absence of a thing, such as the hole left in a heart by some tragic loss or the effects of invisible forces tugging at the physical world surrounding us?

This conundrum fascinated Hirshhorn Museum curator-at-large Gianni Jetzer who selected more than 70 works from the museum’s collection for “What Absence Is Made Of,” an ambitious new exhibition that fills the galleries circling the outer ring of the museum’s third floor.

“I wanted to focus on how artists actually can create a presence through absence,” Jetzer says. “We are definitely living in a material world and art has this incredible capacity to be on one hand material but to also point at phenomena that go beyond the material surface of the artwork.” 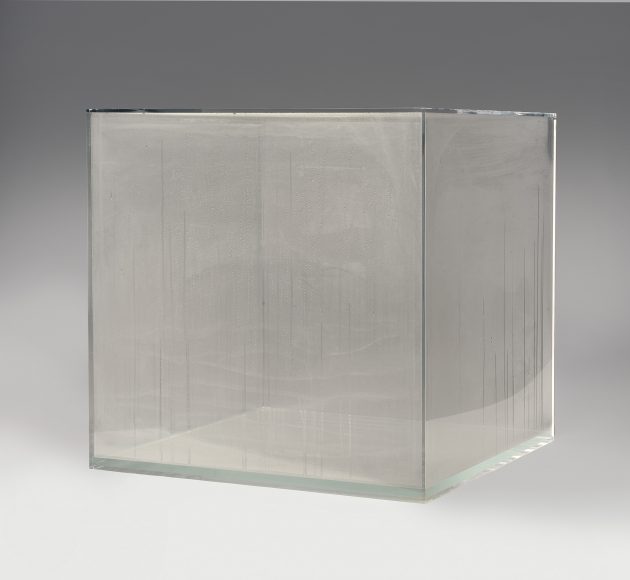 Jetzer spent several months researching the Hirshhorn’s expansive collection to find artists whose work related to this theme. Through paintings, photographs, sculpture and video installations, the exhibition touches on aspects of meditation, grief, alienation and loss. Visitors move through the exhibition in a progression of five sections: “The Dematerialization of the Art Object,” “The Body in Pieces,” “Close to Nothing,” “Memento” and “The Posthuman Body.”

“I wanted the artworks to relate to each other and prepare the viewer for the following experience to make it more interesting and intense,” Jetzer says. 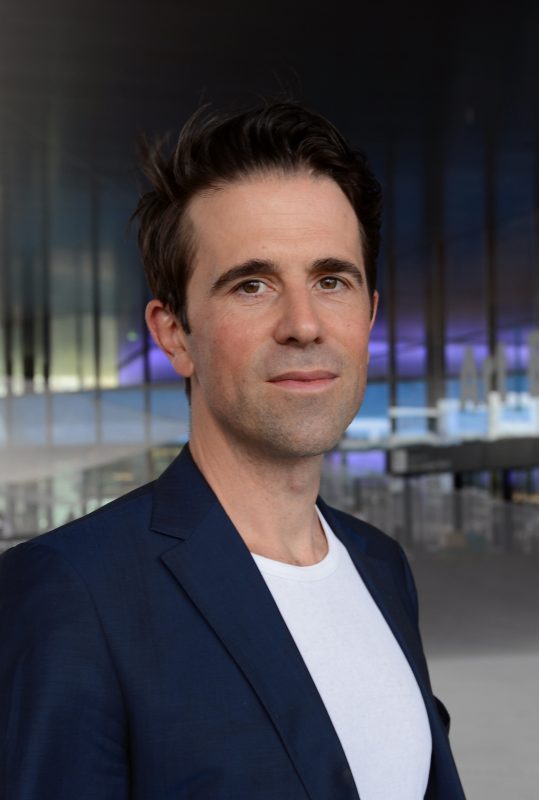 The exhibition opens with an idea, or the definition of an idea. Conceptual artist Joseph Kosuth’s photograph features the dictionary definition of “idea” printed in white text on a black background. “Titled (Art as Idea as Idea) [idea]” (1968) was part of Kosuth’s First Investigations series, which also included definitions of water, art and chair, and even the definition of definition.

Kosuth has said that “art is making meaning” and the work seeks to convey an idea without any context or constraint. The viewer must fill in the blanks as to meaning.

In another gallery, piles of blank copy paper gather in shifting piles on the floor like knee-deep snow drifts. As visitors walk through the paper, more sheets fall from ceiling-mounted machines as a soundtrack with a disembodied voice speaks phrases such as “a voice offers” and “a mouth opens.” Ann Hamilton’s immersive 2001 installation titled “at hand” (2001) has removed the artist’s hand from the equation, replaced by the repetitive motions of automated machines and random movement of falling paper.

In another work that reacts to its environment, German artist Hans Haacke’s “Condensation Cube” (1963) is a large acrylic cube that fills with small rivulets of condensation inside the cube’s walls depending on the temperature and humidity of the room in which it is placed.

In the “Memento” section of “What Absence Is Made Of,” the framed black-and-white portraits of eight smiling children from a 1939 Parisian Purim class are surrounded by bare lightbulbs and trailing wires in “Monument” (1989) by French artist Christian Boltanski. 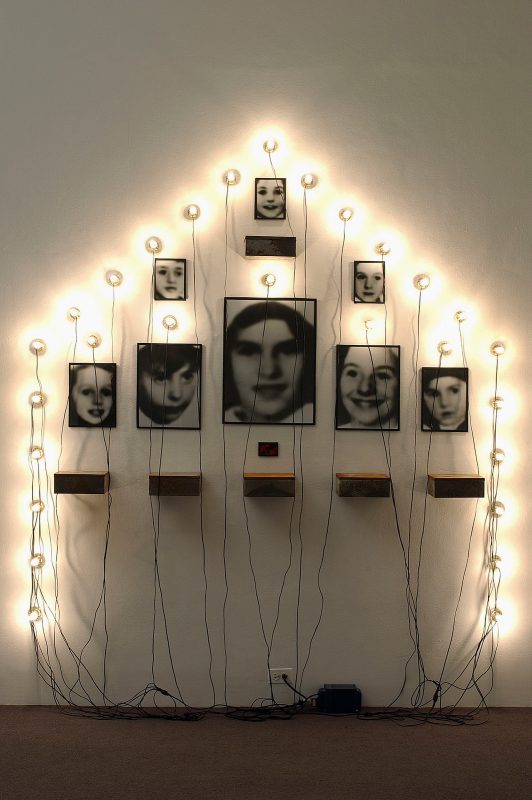 The fate of these Jewish children during World War II and the Holocaust are unknown, creating some uncertainty about any sense of loss.

Columbian artist Doris Salcedo’s untitled sculpture (1995) featuring a wooden bed frame and wardrobe filled with concrete mourns people who “disappeared” in conflicts in South America when citizens were targeted by repressive governments for even the slightest perceived offense. Their possessions have been replaced with concrete, creating a lasting memorial to their lives even if their bodies have vanished.

Most of the artwork in the Hirshhorn’s “What Absence Is Made Of” is stark and monochromatic, creating a somber melancholy tone that fits with absence and loss.

“I didn’t want to have a carnival impression of many colors,” Jetzer says. “I really wanted to pare it down and for the viewer to concentrate on particular artworks.”

Emptiness often has a negative connotation in the West, yet Eastern ideas about meditation portray emptiness of thought or mind as a step toward enlightenment. 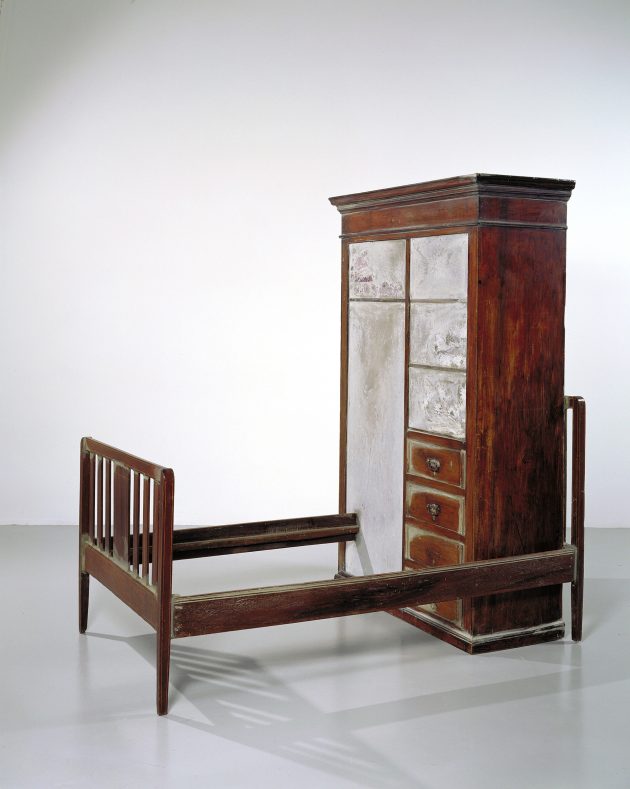 “We have just a constant flood of information and so many distractions nowadays. It just gets crazier and crazier when you have to read the news three times a day just to keep up,” Jetzer says. “I hope that people may de-accelerate for a bit in this exhibition and think about what art can offer as a way to empty your mind and fully concentrate.”

The effects of our digitally saturated world are explored by Siebren Versteeg in his two-screen digital video installation titled “Neither There nor There” (2005), which shows pixels flying between two identical images of Versteeg hunched over his phone. With the average American spending more than 10 hours per day staring at a screen, we exist in a netherworld of distraction, not fully engaged in the present moment in the real or in the digital world as we toggle back and forth between them.

“Neither There nor There,” Siebren Versteeg, 2005. (Hirshhorn Museum and Sculpture Garden photo by Lee Stalsworth)

The loss of artwork itself is chronicled in John Baldessari’s “Cremation Project, Corpus Wafers (With Text, Recipe, and Documentation)” (1970). After becoming disillusioned with his work, Baldessari burned all of the artwork he created from 1953 to 1966. He then used some of the ashes to cook wafers that he placed in a glass jar, leaving some physical remnant of his creative output. The work acts as a good summation of the conflicting feelings stirred by absence or loss, ranging from grief toward enlightenment or struggle toward acceptance.

“What Absence Is Made Of” is on view at the Hirshhorn Museum through summer 2019.