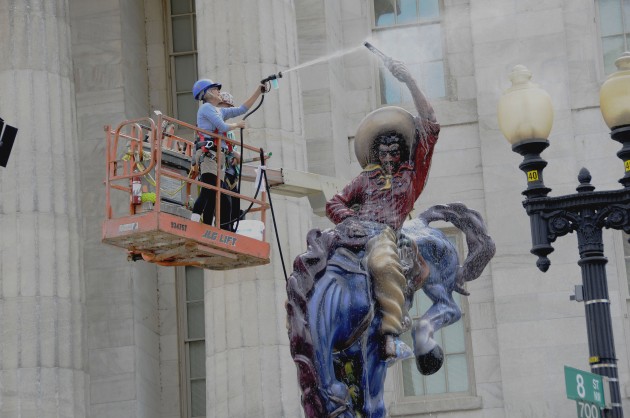 What do a cowboy and a Corvette have in common? It’s not the opening of a joke, but rather a key to the current restoration of the Smithsonian American Art Museum’s vibrant outdoor sculpture “Vaquero,” by Chicano artist Luis Jiménez.

“It’s really an unusual piece because it’s not bronze and it’s not marble, which most outdoor sculptures are made of,” Helen Ingalls, objects conservator at SAAM, explains. “‘Vaquero’ is made of a plastic, acrylic urethane, which is typically used to make signs and some car bodies, like the Chevy Corvette Stingray. It is one of the more stable plastics and holds up really well outdoors.”

“Vaquero” is hollow inside. A woven fiberglass fabric inside the sculpture serves as a matrix to hold the resin. Jiménez once worked with fiberglass as an apprentice in his father’s sign-making shop in El Paso, Texas.

Since Ingalls is responsible for the material well being of all SAAM’s sculptures, it has been up to her to figure out how to regularly treat “Vaquero,” which has stood outside the museum for more than 20 years enduring bird droppings, acid rain and city dust. Jiménez even came to the museum and worked with Ingalls to repair the sculpture’s base years ago.

Traditionally, outdoor sculpture is maintained by washing and waxing, so that is what Ingalls began to do. “That is how you maintain a car so it made sense to give the sculpture a protective layer to exclude water and grime, which wax does.” 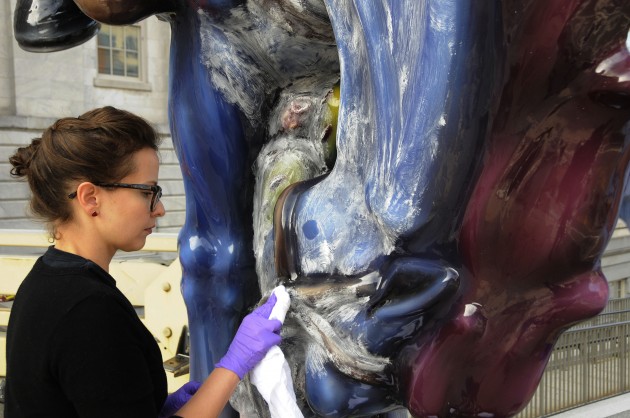 Preventing the fading of its richly colored plastic was also a critical aspect of Ingalls preservation strategy. “So much of the very essence of ‘Vaquero’ are the vibrant colors that contrast with the urban landscape around it. I was determined to do everything in my power to keep the sculpture from fading,” Ingalls says.

To that end, Ingalls changed the type of wax numerous times over the years to see if any particular blend yielded better results. She also experimented with adding different light-stabilizing chemicals to the wax.

“The Jiménez sculpture is a very complex, layered structure. On the outside there are several clear coats of acrylic urethane resin, with no pigment, which act as a sealant. Its high gloss contains a kind of SPF (“sun protection factor” or light absorber) that protects the sculpture against ultraviolet rays,” explains Ingalls. “Just as suntan lotion needs to be reapplied constantly, these chemicals also start to lose their effectiveness over time—so I began to make my own wax coating, adding these UV protective chemicals to prevent fading.”

Ingalls and her team thoroughly wash and wax the sculpture once a year, which has helped preserve the surface. But after constant exposure to the elements, the sculpture was in need of a full-scale restoration. 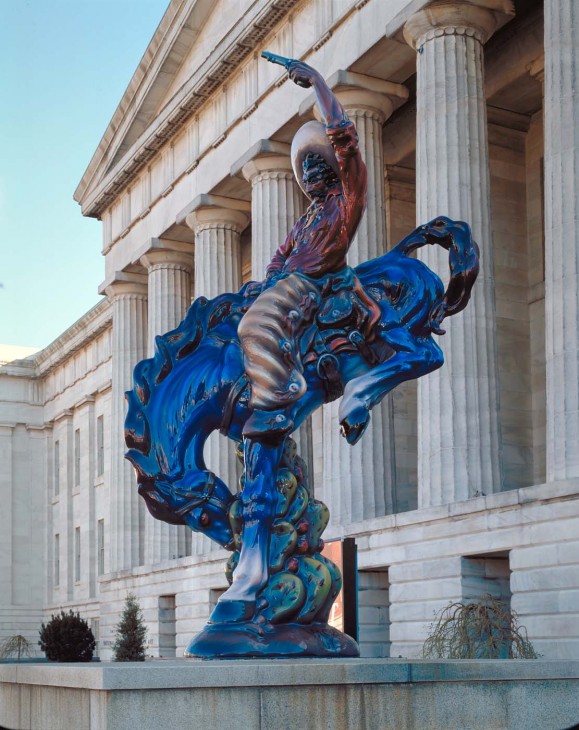 “The main problem was the deterioration of the top clear layers that act as a first line of defense. Breakage of the chemical bonds that make them a film caused them to begin to flake off,” explains Ingalls. “We knew we needed to renew these top layers but we faced a technical problem: we couldn’t just put a new coating on top of a coat that was flaking since the deteriorated coating would just take the new coating with it when it flaked off.”

The solution: The sculpture was transported to Oberlin, Ohio where McKay Lodge Fine Art Conservation Laboratory will undertake “Vaquero’s” re-surfacing. Their staff will use low to medium pressure water followed by a very fine glass powder abrasive to gently remove the flaking layers of degraded clear coat.

To restore clear coats that protect the sculpture, McKay Lodge will work collaboratively with PPG Automotive Refinish, a company specializing in transportation and industrial coatings, to research and identify an appropriate coating to use on “Vaquero.” 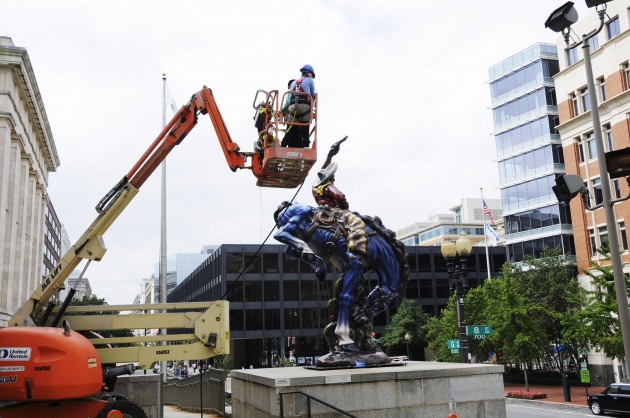 “When we first considered the conservation of this sculpture, we didn’t realize that new automotive resins have been researched so thoroughly over the last 10 to 15 years and their durability has evolved way beyond the durability of the acrylic urethane that “Vaquero” is made from,” Ingalls says.

The newer coating formulations that McKay Lodge is applying to the sculpture will last longer, withstand the elements much better and won’t require any maintenance—other than regular washing, something that makes Ingalls very excited.

“The maintenance up until now has been very hard work,” Ingalls says. “Applying two to three coats of wax to such a large sculpture and buffing it for hours is very labor intensive. Plus it’s not a flat surface like a car but rather has lots of folds and corners that make it more difficult. In terms of surface area, it’s more like applying wax to six cars… six cars that are 16-feet high.”

One of the most important Latino artists of the twentieth century, Luis Jiménez (1940-2006) was celebrated for his public works that offer unconventional perspectives on American culture and history.

“Vaquero” is widely considered one of Jiménez’s most significant works. The sculpture features a brown-skinned figure, wearing a sombrero and sitting atop a rearing horse. Jiménez intentionally titled the sculpture “Vaquero,” Spanish for cowboy, to emphasize the Mexican roots of this classic American icon.  Unlike traditional stone or bronze equestrian monuments that depict historical leaders, Jiménez depicted an anonymous Mexican American cowboy in vivid color.