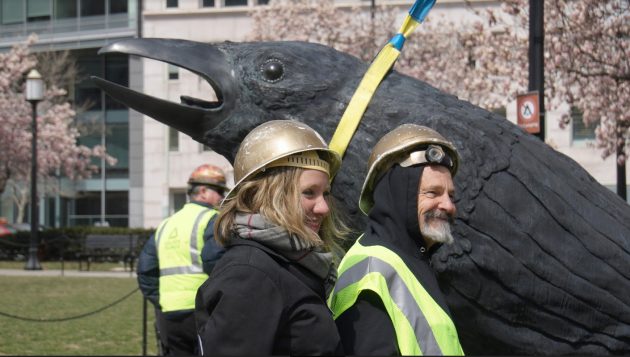 In downtown Washington, D.C., art is spilling out from galleries and onto the streets.

Six unusual sculptures have popped up recently on sidewalks and in parks, including a 14-foot-tall bear, two giant bronze crows and a bust of poet Maya Angelou where visitors can climb inside to hear her read one of her poems.

The sculptures are an extension of the Smithsonian American Art Museum’s new exhibition at the Renwick Gallery “No Spectators: The Art of Burning Man,” which explores the art and eclectic history of a giant counter-culture festival that occurs each summer in Nevada’s Black Rock Desert. At Burning Man more than 70,000 costumed participants experience giant art installations, mutant art cars, dance parties and “radical self-expression.” 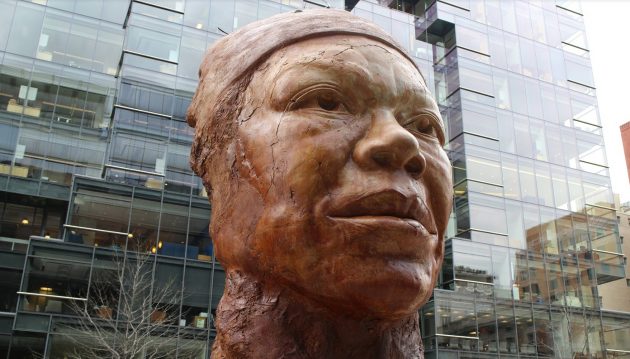 “Maya’s Mind” (detail) by Mischell Riley, stands on 17th Street N.W., between H and I streets, in Washington, D.C.

Artist Robert Ferguson—half of the artist couple credited as Mr. and Mrs. Ferguson—took a break recently while installing the 3,200-pound waving bear “Ursa Major” near 19th and I Streets N.W. to talk about his surprise at being invited to be part of the Renwick exhibition.

“Everybody knows where the Smithsonian is and what it is and what it means so, we were like, ‘You bet!’” he said. “The art is incredible and the people are wonderful at Burning Man. We started to do large art there just because we could, and Burning Man gives you that opportunity.”

Ferguson and his wife Lisa met 10 years ago at Burning Man, and they started making oversized sculptures first at their own expense and then through grants from the Burning Man Project, the nonprofit that produces the event. 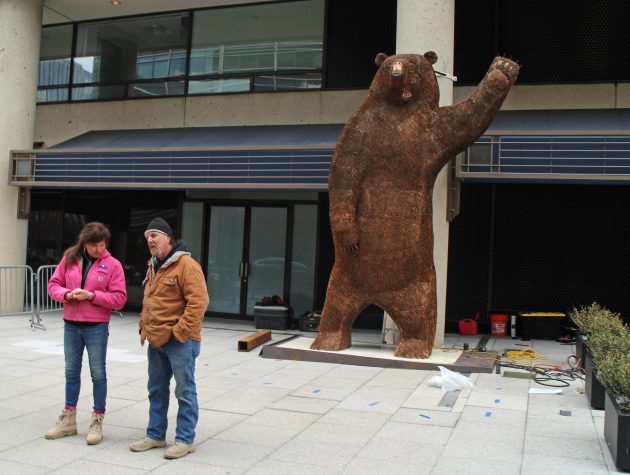 The atists known as Mr. and Mrs. Ferguson stand in front of their sculpture “Ursa Major,” during its installation near 19th and I streets, N.W., Washington, D.C.

“Ursa Major” was at the center of a dance party with thousands of people at Burning Man in 2016. It has a steel frame with a Styrofoam body covered in stucco to hold 170,000 donated pennies on their edges, creating its copper fur. Like other Burning Man outdoor sculptures, “Ursa Major” is meant to be touched.

A few blocks away at 17th Street N.W. between H and I Streets, artist Mischell Riley installed “Maya’s Mind,” her monument to Angelou set atop three large books. It was featured at Burning Man last year.

The back of Angelou’s head is open so people can climb up to hear a poem. Above, an open birdcage represents Angelou’s autobiography “I Know Why the Caged Bird Sings.”

The acid-stained reinforced-concrete sculpture is the first in a series featuring famous women. Riley has plans for sculptures of Jane Goodall and Amelia Earhart.

She said she had been commissioned to create monumental sculptures before, but they were “by men, for men, and about men.” She wanted to do something more creative and powerful with her sculpture of Angelou.

“I know I’m a lucky person in the right place at the right time. A Burning Man exhibition coming to the Smithsonian is wonderful,” Riley said. “People say Burning Man art isn’t fine art, but it is a fresh new way to look at sculpture and interaction. It’s a different kind of movement in the art culture that stands out on its own, and I think we’re making really good headway.”

Burning Man is a natural fit for the Renwick, which is dedicated to contemporary craft, said exhibition curator Nora Atkinson. Many Burning Man artists come from a maker community that works outside the art world. 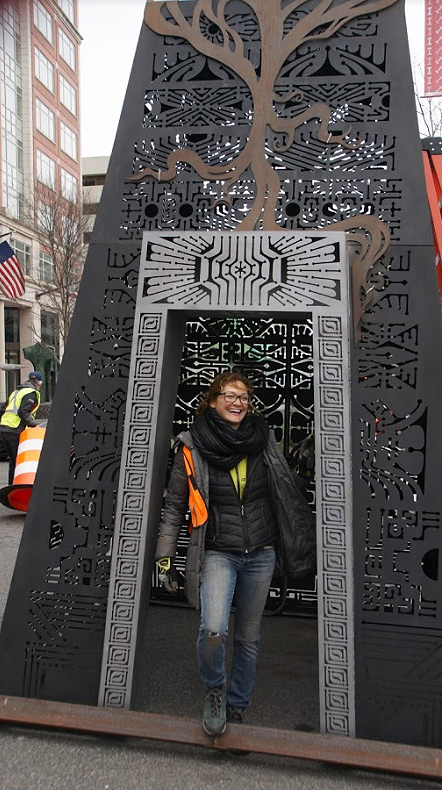 “Craft to me is about a way of living differently in the modern world,” Atkinson said. “It is about the value of process and taking risks when you are creating work.”

The outdoor sculptures will be on display through December.