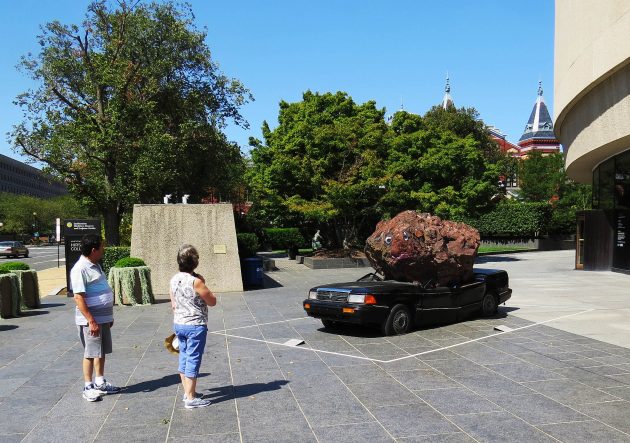 Visitors to the Hirshhorn plaza encounter “Still Life with Spirit and Xitle.” (Photo by John Barrat)

Although it has no magnetic properties, the 9-ton red volcanic boulder on the plaza of the Hirshhorn Museum and Sculpture Garden keeps pulling people in from the nearby sidewalk on Independence Avenue. Perhaps it is the boulder’s painted-on smirk or the fact that it sits atop a 1992 Dodge Spirit, creating, as a recent press expounds: “a slapstick disaster scene… part performance, part sculpture.”

“Joyful and cathartic,” is how Hirshhorn Chief Curator Stéphane Aquin described the sculpture “Still Life with Spirit and Xitle” on a recent August morning as he watched person after person curiously approach and then examine the artwork. Many took selfies with the smashed car and rock.

“On a very simple level, people just see a rock on a car and they say, ‘God this is fantastic,’ because they wouldn’t dream of wanting to see that on their car,” Aquin says. “And then some would, because they hate their car.”

Created by expatriate American artist Jimmie Durham in 2007, the Hirshhorn recently acquired the sculpture following its appearance in the 2015 Art Basel exhibition in Miami Beach. “It was truly the star of the art fair,” Aquin recalls. “I don’t know if it is a sign of the quality of a work, but definitely of its public appeal, it blew up on Instagram. It was really the most spectacular thing in the fair.”

Durham’s name for the sculpture refers to the ancient Mexican volcano Xitle (shy-tuhl) which means, “Spirit.” It erupted around 245-315 AD and engulfed the then-prominent city of Cuicuilco in lava. Durham had a 9-ton boulder quarried from near the buried city which was then placed by crane upon the roof of the Dodge Spirit. As a finishing touch, Durham painted a smug, cartoon-like face on the boulder. 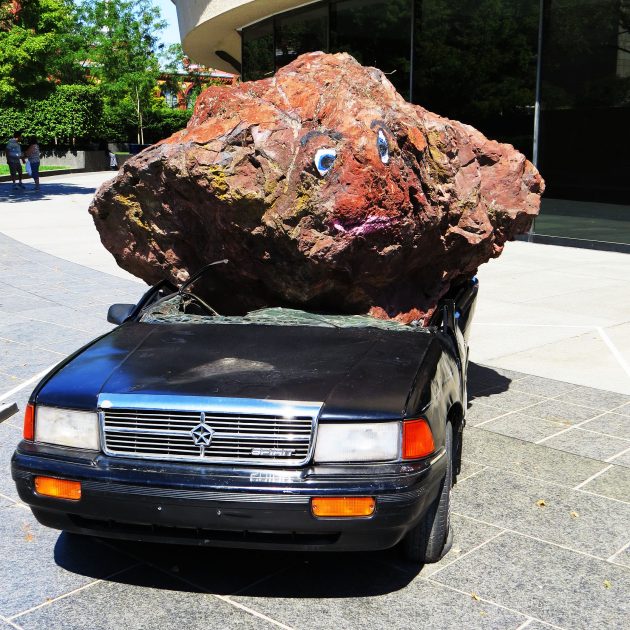 “It’s sort of an open metaphor of the revenge of nature over culture,” Aquin explains. “It represents the encounter of two forms of spirit, one ancient, mythological and physical and the other—a Dodge Spirit—a car produced in Mexico.

Durham, who had lived in Mexico between 1987 and 1994, was aware of other associations with the car, Aquin says. “Because it was a powerful car undercover police would use them, as well as drug dealers…so it has associations of shady, nefarious government force.”

Although the volcanic rock appears to have landed violently upon the car, Hirshhorn staff placed it gently down with a crane. The boulder’s weight had already bent the car’s frame, pushing it down to the ground. “There is no car that’s going to take 9 tons,” Aquin says.

Its placement on the plaza in front of the Hirshhorn’s main entrance is not arbitrary, Aquin adds. Car and rock sit atop the only concrete pillar that supports the plaza from below. “We had X-rays done to locate the plaza pillar and determine the exact position where we could safely place it,” Aquin explains. “Anywhere else and it may have dropped straight down,” into the Hirshhorn’s basement. 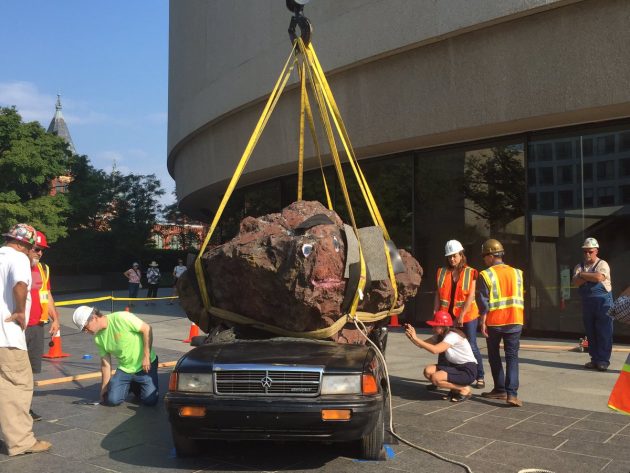 A crew of Smithsonian staff use a crane to install Jimmy Durham’s sculpture “Still Life with Spirit and Xitle” on the Hirshhorn Plaza.

After numerous walks around the museum while observing the constant flow of pedestrians in the vicinity, Aquin and other HMSG staff determined that a large percentage of the Hirshhorn’s visitors travel to the museum from the Air and Space Museum and L’Enfant Plaza Metro, walking west along Independence Avenue. With this in mind, the Dodge is aimed at an angle with its headlights pointing at these walkers as they approach the Hirshhorn’s south plaza entrance. The sculpture is “a show stopper,” Aquin says. “Everyone stops. It’s just a simple thing but no one gets over it.”

How does one preserve a demolished car? “It’s complicated,” Aquin observes. As per Durham’s wishes the elements will be allowed to take their toll upon the car. “We know the car is going to dilapidate over time. In 60 years it will be totally different and down the line it will disappear. Durham suggested at some point we replace the car with a typical Washington, D.C. diplomatic limousine…something like a Cadillac Escalade, a motorcade car,” Aquin says.  “But if we do that then the question arises what do we do about the sculpture’s title? We lose the Dodge Spirit.”

For the rock, geologists and volcanologists have been invited to assess the cracks in the rock and, as a few plants have grown on its top, a botanist also is being consulted.

“Still Life with Spirit and Xitle,” signals a new direction for the Hirshhorn more than anything else, Aquin says. “It’s only one work but it has transformed the plaza and the whole look of the building. Little by little that’s what we are trying to do.”