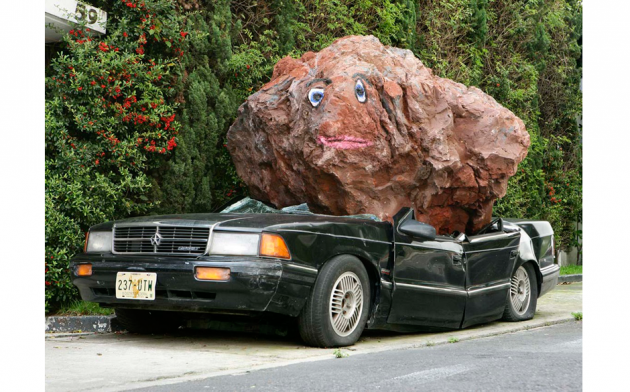 “Still Life with Spirit and Xitle”

Visitors–and drivers–on the National Mall have been surprised recently to encounter the Hirshhorn’s jaw-dropping (rock-dropping) newest acquisition, a 1992 Dodge Spirit crushed under the weight of a 9-ton volcanic boulder with googly eyes. Installed Saturday, Aug. 6 in front of the museum’s main entrance on Independence Avenue, the sculpture is titled “Still Life with Spirit and Xitle” and features a car being crushed by a volcanic boulder with a comical smiley face painted on it. This slapstick disaster scene is one of the most well-known works of art by artist Jimmie Durham, a sculptor who is known for his sense of humor and irreverence.

Due to its weight, museum staff used massive cranes, geo-location tools and precise engineering to carefully install the car first, and then the boulder.

Xitle (shy-tuhl) means, “spirit,” which is the name of both the Dodge model of the car and the volcano from which the rock was quarried. Deceptively simple, “Still Life with Spirit and Xitle” is intended to capture the clash between industrial and ancient spirits. Nearly 2,000 years ago, the Mexican volcano Xitle, or “spirit,” erupted and destroyed the ancient city of Cuicuilo. To create the seemingly impulsive sculpture, Durham quarried a 9-ton boulder of red basalt from the archaeological site and used a crane to drop it onto the roof of a 1992 Chrysler Spirit. As a finishing touch, he graffitied the stone with a smug, cartoon-like face. Despite its comedy, the work carries a complex gravity, capturing the moment at which the spirits of ancient and modern collide. It will be on view through Summer 2017.