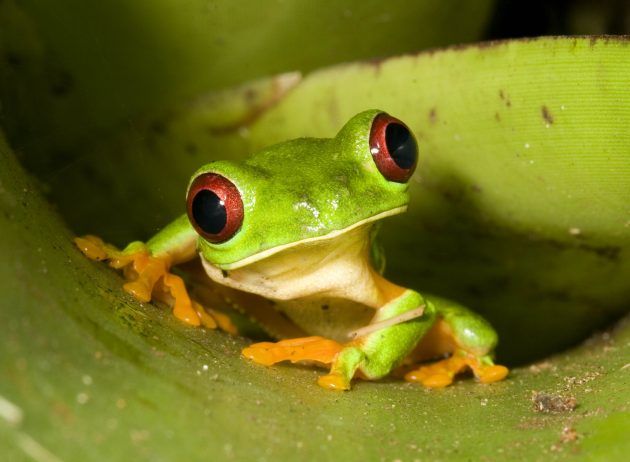 Three former scientists from the Smithsonian’s National Zoological Park–Ellen Lamirande, Don Nichols, and Allan Pessier–were honored at the sixth annual Golden Goose Award ceremony at the Library of Congress on Wed., Sept. 27, for their work in the study of chytrid fungi and its role in global amphibian die-offs. The Golden Goose Award annually honors scientists whose federally funded work may have been considered silly, odd or obscure when first conducted, but has resulted in significant benefits to society. Led by the American Association for the Advancement of Science, the award committee includes several science societies and organizations and Congressional supporters.

According to a Golden Goose Awards press release: Joyce Longcore spent her career toiling in relative obscurity until one day two veterinary pathologists from the National Zoo in Washington, D.C. contacted her. At the time, she was one of just a few people in the world who could have answered their question: What is killing so many of our frogs? Decades of mysterious animal deaths had led to this point, when Longcore’s lifelong dedication to the study of an obscure branch of the tree of life–chytrid fungi–would prove crucial to unlocking the mystery of mass die-offs of amphibians around the globe. Thanks to her work with Allan Pessier, Don Nichols, Elaine Lamirande and many colleagues around the world, today we know that fungal infections have the potential to move great distances rapidly, assisted by human movement. Their insights have led to changes in national policies on how animals are moved around the globe and even helped us save iconic species from extinction.

“AAAS is proud to support the Golden Goose Award, which highlights scientific success stories that would not have been possible without federal funding,” said Rush Holt, chief executive officer of AAAS. “These scientists have changed the world in unpredictable ways, and we applaud their curiosity, their tenacity and their achievements.”