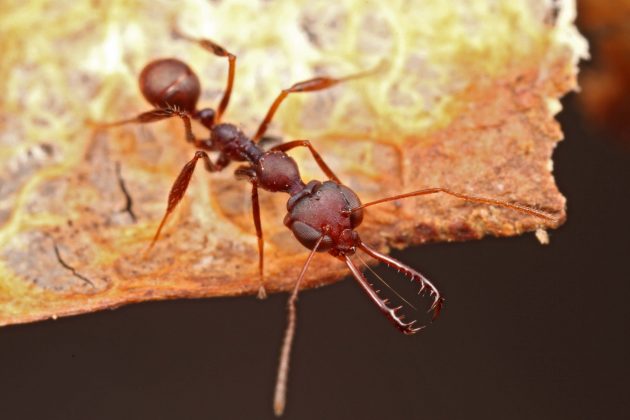 A Myrmoteras ant. Smithsonian researchers have discovered that Myrmoteras ants’ jaws work differently than those of any other known ant. (Photo by Steve Shattuck)

In conflicts between predators and prey, speed is a decided advantage, and evolution has given the trap-jaw ant a distinct advantage with spring-loaded jaws that snap shut—often on their next meal—with astonishing speed.

In the Aug. 30 issue of the Journal of Experimental Biology, scientists at the Smithsonian’s National Museum of Natural History provide the first mechanical description of the jaws of a little-known group of trap-jaw ants called Myrmoteras. While at least four different ant groups have independently evolved a latch, spring and trigger system to power their fast-moving mandibles, the researchers have discovered that the jaws of Myrmoteras ants work differently.

“It’s a very interesting example of convergent evolution,” says Fredrick Larabee, a postdoctoral researcher at the museum who led the research. “Different trap-jaw ants have very fast jaws to accomplish similar tasks, but this group has evolved them in a completely independent way.”

Myrmoteras ants live in the tropics of Southeast Asia, where they feed primarily on springtails—tiny arthropods that launch themselves into the air like fleas when they detect a threat. When crawling about the ants keep their long, slender jaws locked and loaded, open to a 280-degree angle. Latched in this position, the jaws store elastic energy. When released, they snap shut in a fraction of a second. “These ants are rarely seen in nature and are almost impossible to keep alive in the lab,” said University of Illinois entomology professor Andy Suarez, who conducted the study with Larabee.

No one knew previously just how fast Myrmoteras jaws can move, but according to the new study, the ant’s predatory strike takes about half a millisecond. That’s 700 times faster than the blink of an eye. To watch the action, Larabee and his colleagues filmed the ants with a high-speed,  50,000 frames per second camera. By measuring the mandibles’ movements between different video frames, they calculated that  Myrmoteras jaws reach a peak speed of about 50 miles an hour.

That is faster than the jaws could move if they were powered by muscles alone, Larabee observes. Still, it is considerably slower than the jaws of other trap-jaw ants. Mandibles of the distantly related Odontomachus reach speeds twice that of Myrmoteras, making their strikes among the fastest animal movements recorded. Those faster ants use their spring-loaded jaws not just to catch their prey, but also to leap away from danger.

But Myrmoteras ants do not seem to need that much speed. “They just need to be faster than the critters they’re trying to eat, and their jaws are plenty fast for capturing springtails,” Larabee says. 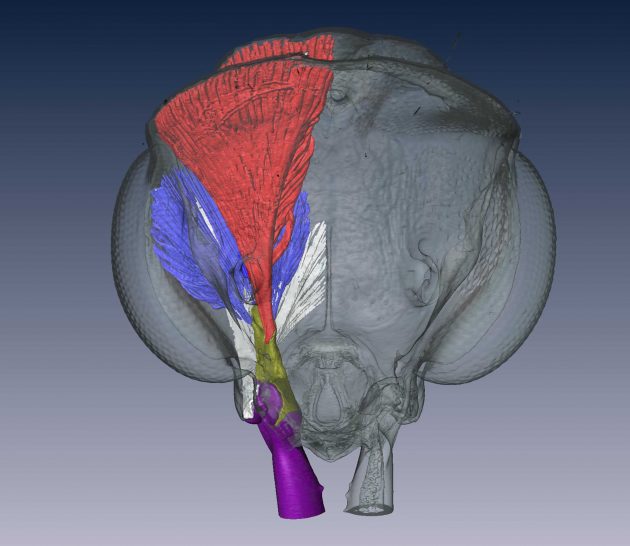 Scientists examined the ants first under a microscope, then using micro computed tomography (micro-CT), a three-dimensional imaging system that uses X-rays to visualize the internal structures of small specimens. Their observations allowed them to piece together a model of how the jaws likely works. (Image Fredrick Larabee, Smithsonian)

For clues into how Myrmoteras executes its power-amplified strike, Larabee examined the ants first under a microscope, and second with micro-computed tomography (micro-CT), a 3D imaging system that uses X-rays to visualize the internal structures of small specimens. His observations allowed him to piece together a model of how the jaws likely works.

Larabee detected a feature of the ant’s mandible joint that allows its jaws to lock open. Before the strike, a lobe on the back of the ant’s head compresses, likely acting as a spring loaded with potential energy. Then a fast-contracting trigger muscle releases the jaws and the stored energy, executing the strike.

“What’s interesting is that the arrangement of the muscles and how the jaws are locked open are completely different from other trap-jaws ants that have been studied,” Larabee said. “It seems like it’s a completely unique evolution of this system.”

Last year, Smithsonian scientists discovered a trap-jaw system in an unusual group of spiders that live in South America and New Zealand. Spring-loaded systems are also responsible for the lightning-fast hops and leaps of grasshoppers, crickets and fleas. These systems are diverse and have evolved through a variety of structural adaptations—highlighting just how advantageous high-speed movements can be. In future studies, Larabee will continue to investigate the diversity of these systems, exploring how the structure of different ants’ trap-jaw mechanisms correlate to their speed and performance. A new high-resolution micro-CT scanner at the museum will enable its scientists to conduct even more detailed anatomical analyses.

Larabee studied the Myrmoteras ants as a Peter Buck Postdoctoral Research Fellow at the Smithsonian’s National Museum of Natural History. The Peter Buck Fellowship Program trains the next generation of scientists by supporting graduate students and postdoctoral researchers in pursuing their research vision to understand nature and culture with the museum’s research staff, collections and facilities.

Funding for this study was provided by the National Science Foundation, the Peter Buck Fellowship Program and the National Geographic Society.