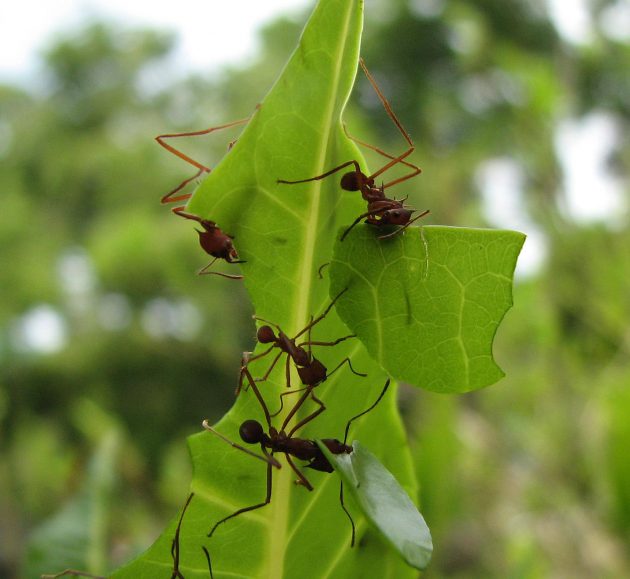 In 2012, scientists observed that of 20 species of fungus-growing ant, including leaf-cutting ants (above), a majority cover juveniles—eggs, pupae and larvae—in mycelia from the fungus they grow. Now, scientists believe this fungal cocoon protects the juvenile ants from parasitic fungus. (University of Wisconsin photo)

In the dark recesses of an underground fungus garden, a Panamanian leaf-cutting ant plucks a tuft of mycelia, the wispy part of the basidiomycete fungus these ants grow and eat, and carries it to a nearby ant pupa. The ant licks the pupa’s body before patting the fungus into place, continuing until it appears, when viewed under a powerful microscope, as though the pupa is webbed in short strands of spaghetti.

Odd behavior perhaps, but leaf-cutting ants aren’t the only ants to cover their pupae in mycelia. In a 2012 study scientists showed that of 20 species of fungus-growing ant (including the leaf-cutting ant), the majority cover juveniles—eggs, larvae and pupae—in mycelia. The research, published in the journal Evolution, was authored by Hermógenes Fernández-Marín of the University of Copenhagen, the Institute of Scientific Research and High Technology Services and the Smithsonian Tropical Research Institute; William T. Wcislo, senior staff scientist at the Smithsonian Tropical Research Institute; and Sophie A. O. Armitage and Jacobus J. Boomsma of the University of Copenhagen.

Video: At center screen are pupae and larvae of the leaf-cutting ant A. echinatior covered in a protective coating of the basidiomycete fungus these ants grow and eat. At top are eggs awaiting their protective fungus covering. (Video by Rita Marissa Giovani)

“This [finding] was nice because the fungi is really the food for the ant, but in this context the ants co-opt the fungi for protection,” Fernández-Marín says.

In 2012, scientists  weren’t certain  what exactly the mycelial cover was protecting the ants against. Now, they may have an answer: The fungal cocoon impedes a parasitic fungus. In a new study in the Journal of Animal Ecology, Fernández-Marín, Wcislo, Armitage and Boomsma suggest that for the leaf-cutting ant Acromyrmex echinatior, this fungal cocoon slows down a known enemy: the parasitic fungus Metarhizium brunneum.

While an ant is out foraging, spores of this parasitic fungus can land on it, burrow through its outer covering, called a cuticle, and invade the ant’s body. The fungus then proliferates and kills its host. With tens of thousands of ants tromping around the colony, the parasitic fungus could easily spread through contact, with disastrous results.

Video: At center screen are pupae and larvae of the leaf-cutting ant A. echinatior covered in the basidiomycete fungus these ants grow and eat. At top of screen are two eggs without the protective fungus covering. (Video by Rita Marissa Giovani)

Luckily, A. echinatior ants  have developed multiple ways of bolstering themselves—and their colony—against infection. Their bodies house different chemical weapons. In a gland on their back, they store antimicrobial compounds, and on their bodies they host antibiotic-producing microbes. Now it seems this fungal cocoon is “an extra arrow in their quiver of antimicrobial strategies,” Wcislo says.

How does the fungal cocoon work? It seems to slow the growth of the parasitic fungus. In experiments, the researchers brushed the protective basidiomycete fungus from the abdomens of some of the pupae and left others with their fungus intact. They then added parasitic spores on a small patch of abdomen using the tip of a pencil. They observed that the parastitic fungus grew faster on the bare-bellied pupae.

“I was surprised that this is possible,” says Peter Biedermann from the Max Planck Institute for Chemical Ecology, who was not involved in this research. “That you can really see the fungus mycelium covering on the brood and you can brush off mycelium from some body parts is interesting.” 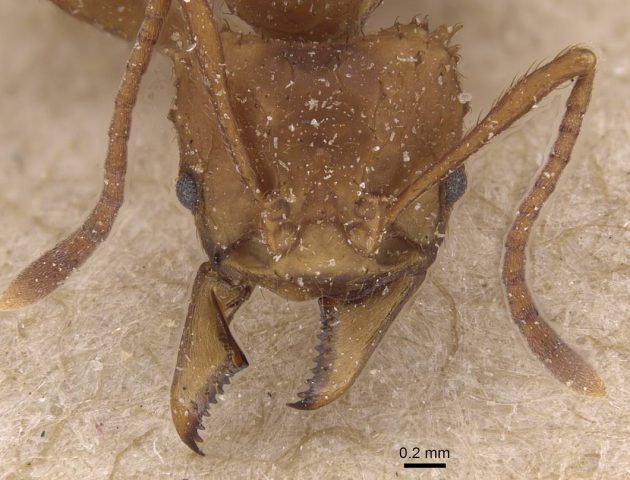 Close-up of the head of the leaf cutting ant “Acromyrmex echinatior” (Photo by Will Ericson, AntWeb.org)

The mycelial cover plays a key role in defending the overall health of the colony. “It’s probably stretching the analogy a bit too far, but it’s almost as if these mycelial covers act as a sort of miniature quarantine, it seems, which might just reduce the rate of contact between uninfecteds and infecteds, or it might just slow the rate of transmission of spores,” Wcislo says.

Either way, the mycelial cover appears to work in combination with the ants’ other methods for fending off infection. Fernández-Marín and Wcislo are now working to find out how the ants employ their different antimicrobial techniques depending on the type of pathogen that threatens them.

It also still remains to be seen if, when an ant pats mycelia onto a pupa, it is actually planting them there. It could be that the protective fungus grows on the pupa, fed by the pupa’s secretions. If so, it may make sense to think of these pupae as a new type of Chia Pet—one in which the pet, too, is alive.