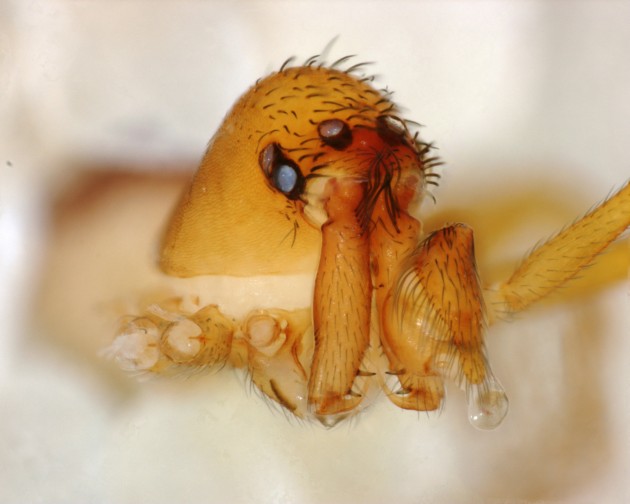 “Chilarchaea quellon,” male: looking at the face of a trap-jaw spider, the long chelicerae are in front and the fangs at the tip. A team of researchers led by Smithsonian scientist Hannah Wood has discovered that trap-jaw spiders have a surprising ability to strike their prey at lightning speed and with super-spider power. (Photo by Hannah Wood)

New high-speed videos of 14 species of tiny Mecysmaucheniid “trap-jaw” spiders have revealed that some species can snap their mouth parts shut at incredibly fast speeds and with super-spidey power.

Hannah Wood, curator of spiders at the Smithsonian’s National Museum of Natural History, used a high-speed camera to record the spiders—some at 40,000 frames a second. Her videos showed that when target prey came close enough, the spiders snapped their jaws (chelicerae) shut with incredible power and speed. This type of predatory behavior had been observed before in ants, but not in arachnids.

Aside from sheer speed, the power output from four of the spider species exceeded the known power output of their muscles, Wood and colleagues discovered. This finding implies that the spiders’ movements are not directly powered by the tiny muscles of their jaws.

In this video a trap-jaw spider snaps its jaws with lightning speed.

Instead, other structural mechanisms must be involved that allow trap-jaw spiders to store energy required to produce their high-powered, lightning-quick movements. The biological ability of these spiders’ to release stored energy almost instantaneously results in the power being amplified. Mecysmaucheniid spiders live exclusively in New Zealand and southern regions of South America

Wood and coauthors describe the anatomical differences between trap-jaw spiders and their close relatives in a paper in the scholarly journal Current Biology. The research team is conducting additional investigations to better understand the underlying mechanism for storing energy for trap-jaw spiders’ power-amplified behavior. 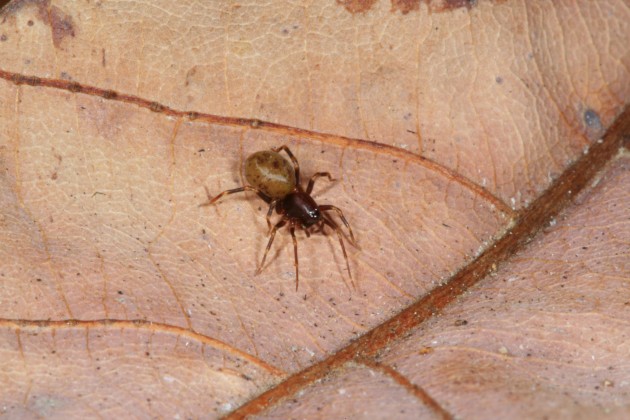 Using DNA analysis, Wood and team also found that the high-speed, power-amplified strikes have independently evolved at least four different times—a phenomena known as convergent evolution—within the Mecysmaucheniid family. The findings also contribute to Wood’s broader investigation into the evolution of the spider tree of life, shedding new light on how the bizarre “head” anatomy of trap-jaw spiders and their relatives may have allowed them to evolve unique survival abilities like power-amplified strikes. 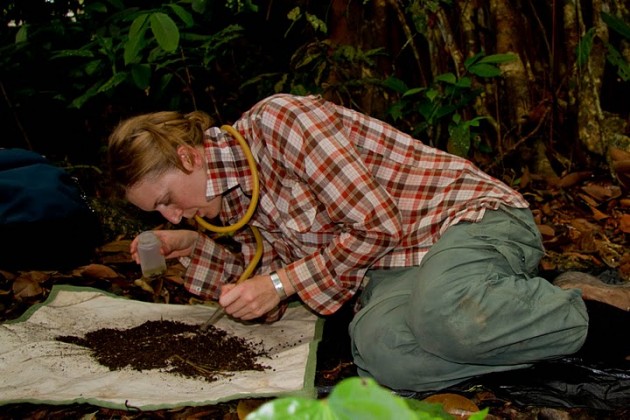 “This research shows how little we know about spiders and how much there is still to discover,” Wood says. “The high-speed predatory attacks of these spiders were previously unknown. Many of the species I have been working with are also unknown to the scientific community.”

“Many of our greatest innovations take their inspiration from nature,” Wood adds. “Studying these spiders may give us clues that allow us to design tools or robots that move in novel ways.”