“We need 500 juggling balls,” a project coordinator tells the supply coordinator with a straight face. In the final days leading up to the 2017 Folklife Festival the offices of the Smithsonian Center for Folklife and Cultural Heritage in Southwest Washington, D.C., are bustling with well-organized mayhem. At a corner desk, a multicolored spreadsheet spans two computer monitors like a backlit mosaic. It is the final schedule for 500 master circus performers from 15 national circus troupes who will travel to Washington, D.C. to entertain and engaging with hundreds of thousands of visitors over 10 days in 17 different venues.

In the midst of this sustained crescendo of activity, circus arts Co-Curator Jim Deutsch, Program Coordinator Nichole Procopenko and Intern Taylor Heagler took a few moments to answer a some questions from Insider about the Center’s foray into circus arts as a key component of the Smithsonian Folklife Festival’s 50th Anniversary, beginning Thursday, June 29.

Q: What kinds of circus performers will be coming?

Procopenko: Circus arts, in general, focuses on five disciplines: aerials, acrobatics, equilibristics (things like balancing on wire), juggling and clowning. Those five disciplines will be represented robustly at the Festival.

Q: How do circus arts fit into the larger mission of the Folklife Festival?

Procopenko: And the Festival has a history of featuring “occupational cultures,” which is where circus arts fit in. 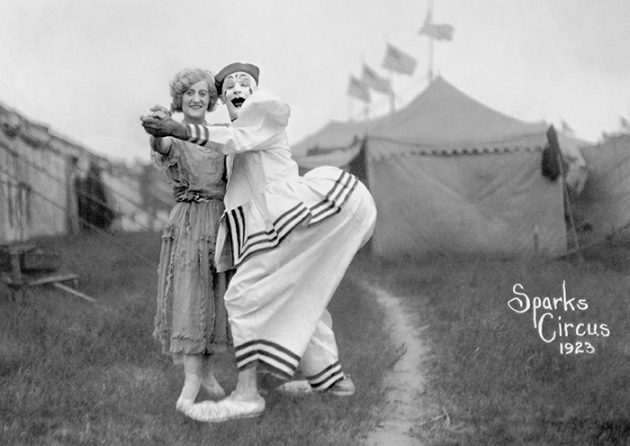 Deutsch: In years past we did one on truck drivers, transportation workers (flight attendants, pilots, and air traffic controllers), mine workers, and American trial lawyers in 1986.  I remember people saying, “What are trial lawyers doing at a Folklife Festival?” And the answer is, trial lawyers, like any occupational group, have a very rich tradition. The way they talk, the way they select members of a jury, the way they do their final summation to the jury. It’s not what they learn in law school–that’s their formal education. Their informal education is learning from the masters. It’s what folklorists call the process of observation and imitation. Meaning, you take this body of knowledge and you make it your own.

So for circus arts, we have generations, and there was one person who was like a ninth generation acrobat or aerialist, learning from their parents and their grandparents and their aunts and uncles. The circus community, we’re finding, is very small. Everyone knows each other. And in some cases, they’re related through marriage or through blended families. But it’s this occupational culture they share. If you work in a circus, there is a certain language, there are certain customs and traditions and skills, and knowledge and all of that is what we call “folklife.”

Q: How does this relate to a larger body of research about circus arts?

Deutsch: All of our Festival programs are research-based. A lead curator, Preston Scott, is living in Sarasota, Fla., which is circus-central. The Ringling Bros. world headquarters was there, the Circus Arts Conservatory–a major circus troupe–is there. Preston did most of the research starting about two years ago, traveling around the country, attending circus performances, attending circus conferences. He met a lot of the different troupes and was looking for troupes that would reinforce the mission of the Smithsonian, this idea of troupes that were rooted in tradition but who were also innovative, especially with this idea called “social circus,” circuses that are working to promote personal growth and social change.

Q: And those are some of the participants?

Deutsch: I think almost all of our troupes have some “social circus” dimension. For example, Circus Harmony from St. Louis is working with youth from Ferguson, Mo. It’s not just spectacle or entertaining. It’s a way of teaching inner-city youth the circus arts as a part of personal growth and social change. This is part of the research that Preston was doing, to identify possible circus participants.

Q: I think when you say “circus,” people picture elephants and tigers. Is this a way to show that that’s not the circus, entirely, that the circus is really much bigger than that?

Procopenko: The number one question that I’ve been asked from friends has been, “Are you doing this because the circus is closing?,” and they’re referring to Ringling Bros. Well that’s actually not correct. There are hundreds of circus troupes and circus schools across the country, a number of which are coming to the festival. 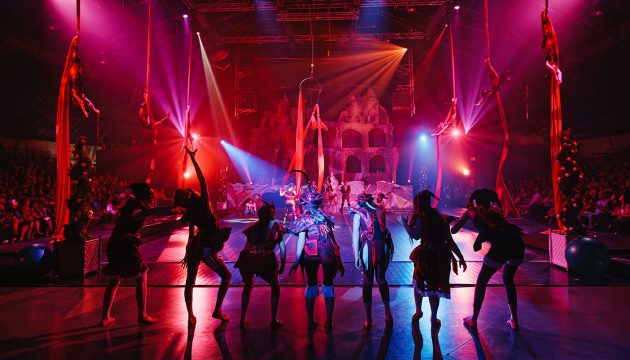 Circus Juventas, based in St. Paul, Minn., is known for pushing the limits of contemporary circus artistry and education. (Photo by Bill Raab)

Q: How did circus arts emerge as such a large part of the Festival this year?

Deutsch: I think it’s just what Nichole was saying, which is a lot of people do not understand fully what the circus arts are, and especially at a time when the big commercial companies have folded their tents, but throughout the U.S. and around the world, the circus schools and the smaller community-based circuses that have more of this folklife, these community-based circuses are thriving in places like St. Louis, and St. Paul, and San Francisco and Sarasota, Fla., and Greensboro, N.C. and Brattleboro, Vt. So that’s exactly what we wish to highlight. So no, we’re not bringing animals. We’re looking at the circus in a different way, and it’s equally exciting and informative.

Q: Is this the first time you’ve done circus arts as part of the festival?

Q: I read that guests will be able to get “behind the scenes”?

Procopenko: Basically the entire time, there will be opportunities for attendees to interact with the performers. The idea is not just to come and see the performance and go home. If there is a performance happening, there will be either narration to contextualize what’s happening, or opportunities to talk to the performers afterward. So you can ask questions, find things out. Our circus school, for instance, which will be located in the Arts and Industries Building, will be run like circus schools would be back home, where the troupes are coming from, but there will be narration going on about what the students are learning, what the audience is seeing,

Our circus school, for instance, which will be located in the Arts and Industries Building, will be run like circus schools would be back home where the troupes are from, but there will be narration going on about what the students are learning, what the audience is seeing, 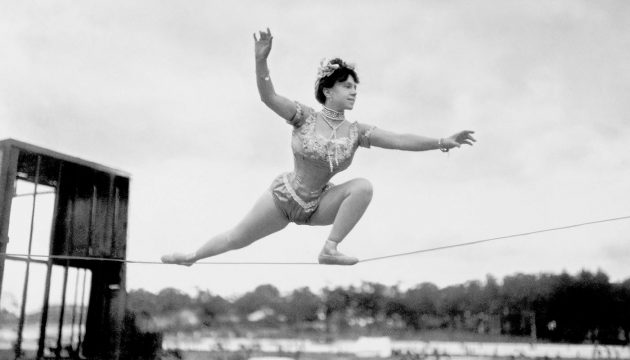 Tightrope walking is one of many circus acts in the genre of equilibristics, requiring precise balance. (Photo by Frederick W. Glasier, Courtesy of the John and Mable Ringling Museum of Circus Art)

Deutsch: But we’re not going to suddenly put someone up on the high wire [laughter]. That’s always been what makes the Smithsonian Folklife Festival different is that we break that fourth wall. At most folk festivals, you’ve got people up on the stage who are performing. At the Smithsonian, and this has been the case since 1967, you have a chance to meet and interact with the performers or the artists. It’s what we call “cultural conversations.”

We try to do it one-on-one or in small groups. This is the idea of getting behind the scenes. How else can you meet Tino Wallenda, who is a sixth generation equilibrist? His great-great-great grandfather in Austria-Hungary starred on the high-wire? Or meet Dolly Jacobs, whose father was Lou Jacobs, a famous clown for Ringling Brothers and Barnum & Bailey. Or meet people like Jessica Hentoff with Circus Harmony or meet Dan Butler from Circus Juventas? Why we have selected them is not only because they are great at what they do but because they are great at explaining. They don’t mind being asked the same question over and over about what is circus arts, and what does a clown do.

For clowning, we’ve got Jeff Raz, from Medical Clown Project in San Francisco, the author of a new book The Secret Life of Clowns. He’s coming, and Michael Christensen who co-founded Big Apple Circus and was one of their leading clowns, Rob Mermin from Circus Smirkus, who studied with Marcel Marceau. These are big names. And they are offering to meet the public and share what they know. So that’s this idea of going behind the scenes. 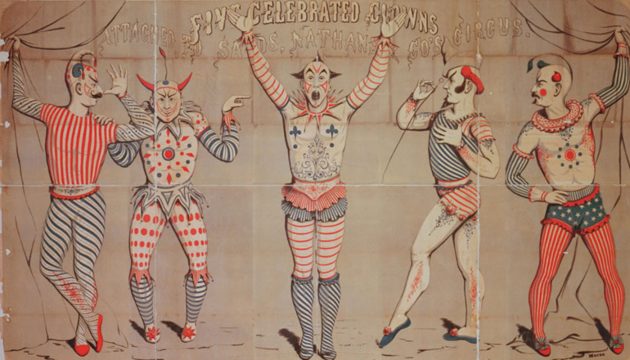 An 1856 woodcut poster print advertises “Five Celebrated Clowns of the Sands and Nathan’s Company Circus (Image by Morse, M’Kenny and Company, Courtesy of the Library of Congress Prints and Photographs Division.)

Q: What’s important about what you’re doing, what you’re showing and what the performers are doing?

Deutsch: As part of the Smithsonian Institution, we think it’s important to help our visitors better understand the diversity of cultures around the world. The circus arts are I think a spectacular example of American history at large. You can look at American History through the way that circus has evolved in this country, and so we think the time is especially appropriate because Ringling has had its last show, but also to demonstrate that circus arts are part of American history and American culture.

Heagler: I’ve only been working here for about a week, and my views of the circus before I got here were very vague and stereotypical, but only being here a week, I’ve learned that the community aspect of it is so strong. I never realized the culture of the circus arts is about the community.

Deutsch: Just to reinforce what Taylor is saying, we are all about community. Whether it’s a community in Hungary, or community in China, this occupational community, that’s what’s been very striking. We’ll talk to one person and they do know each other. These are the bonds, the solidarity. Nichole and I studied folklore, and that’s an important part of folklore, this sense of group and community and building solidarity, building coherence in a world where we’re looking for stronger connections.

Procopenko: Jim and I both formally studied folklore and folklife, and it is the mission of the Center to amplify the voices of people in communities who aren’t represented in a formal way in institutions and museums.

Q: Where do you think the circus is headed?

Procopenko: The writing’s kind of on the wall for that one, at least to me, with the larger corporate circuses closing but the smaller community-based circuses thriving, particularly the social circuses.

Deutsch: This is a topic that we are going to feature quite regularly on our discussion stage [during the Festival.] Having experts like Michael Christensen and Paul Binder who founded Big Apple, as well as Neil Kahanovitz and Larry Solheim, who are the new owners of Big Apple. We can ask them directly, “What is the future of the circus?” The thing about the Festival is that there’s always a lot of audience engagement. That’s the whole purpose of the Festival. Where else can you meet a monk from Bhutan? You can go to Bhutan, at great expense, or you could come to the Folklife Festival. That’s the essence of the Folklife Festival, that you can meet people and talk with them, that you would never have the opportunity to do so. 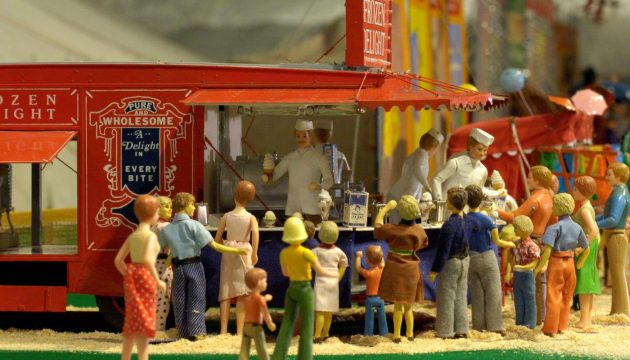 Q: How difficult will it be to actually talk to a performer or expert while guests visit the Festival?

Deutsch: Not every tent will be packed. In 2002, for the Festival on the Silk Road, we had more than million visitors over the course of 10 days, and that was packed. Crowds moderate themselves, so if it’s too crowded in juggling, you go to clowning, or you go to the open air ring. That is our job, to make this available and accessible to as many people as we possibly can. So Nichole’s got her spreadsheet, and that’s why we’ve got 17 different venues. So if it might be crowded in one place, or too hot or raining, you can go in the Arts and Industries Building. We think there will always be something going on of interest.