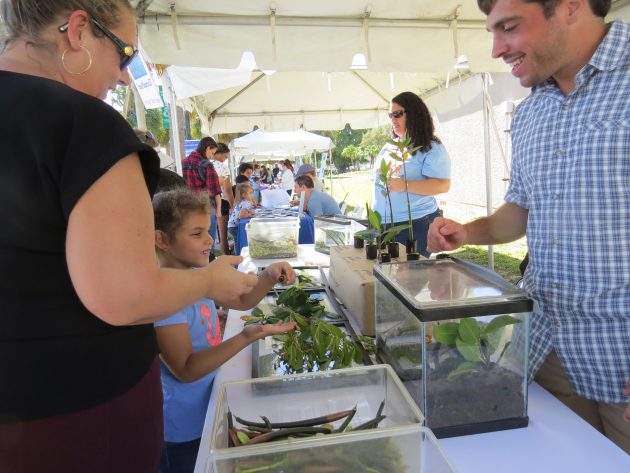 At Smithsonian Marine Station’s Mangrove ID table, visiting University of South Carolina graduate student Zac Cannizzo tests visitors’ knowledge of the parts and pieces of the three species of mangrove that grow around the Indian River Lagoon. (All photos by Michelle Donahue)

Fort Pierce, Fla. – Fall in southern Florida is festival season: when the weather stops being oppressively hot and 70 degrees is positively autumnal.  On Saturday, Oct. 22, armored with jackets and hot coffee to ward off a gusty breeze, parents were out early with their children, exploring several dozen tents loaded with activities, displays and hands-on enticements. They’d come to check out a relatively young but already eagerly anticipated tradition now in its third year here: the Indian River Lagoon Science Festival.

The festival highlights the Treasure Coast’s other persona: The Research Coast.

Organized by the education and outreach staff at the Smithsonian Marine Station and other local partners, this year’s festival featured nearly 80 exhibitors in the sciences, technology and engineering fields, as well as arts and cultural organizations. With one stretch of the 156-mile-long lagoon as the festival’s glittering backdrop under a bright morning sun, nearly 10,000 wandered among the exhibits throughout the day to learn about the diverse research and educational enterprises that thrive on this stretch of the southern Florida coast.

“People get a chance to showcase their own organization, and we are sharing science and getting people excited about it. We’re trying to change the conversation around science,” Diederick explains. 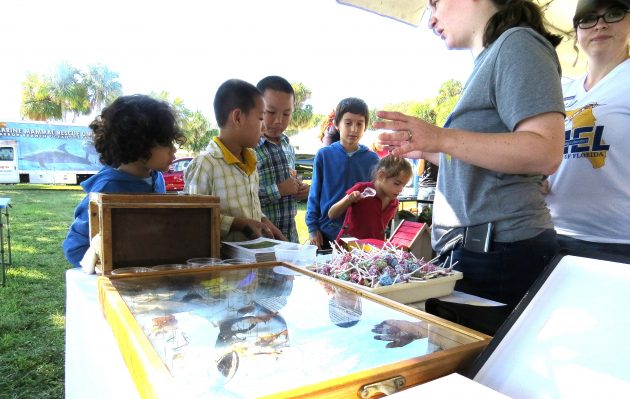 Volunteers at the University of Florida’s Institute of Food and Agricultural Sciences talk with kids about mosquitoes, and that not all of them are blood-suckers. Some mosquitoes eat only nectar, while others like “Psorophora ciliata,” one of Florida’s largest mosquito species and also known as the gallinipper, feed on other mosquito larvae during its own larval stage.

Kids fearlessly handled live, brightly painted giant cockroaches and cheered them on—parents looking on with thinly veiled loathing—as they raced along acrylic runways in one of eight U.S. Department of Agriculture tents. NASA staff and volunteers helped visitors construct their own paper rockets to launch by stomping on empty two-liter soda bottles, while the Treasure Coast Astronomical Society  set up two huge telescopes for visitors to peer at the moon and (heavily filtered) sun. From manatees to mosquitoes, and police forensics to submersibles, the exhibits ran the gamut.

Smithsonian Marine Station staff highlighted their work to monitor and address environmental concerns with the Indian River Lagoon: Visitors played a mangrove identification game with leaves and seed pods; saw a crab that feeds almost exclusively on mangrove leaves; and learned about tiny organisms that live in the sediments of the lagoon’s sandy bottom and how they change with fluctuating water quality. Marine Station Director Valerie Paul demonstrated the strategy of chemical defense in corals and other marine organisms with Tabasco-flavored jellybeans. 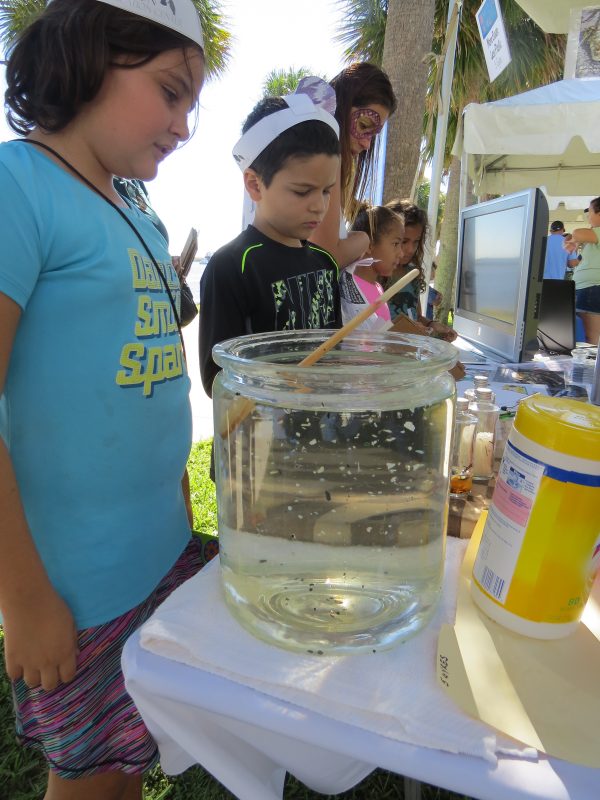 Young visitors learn about the dangers of microbeads and plastic particles in the world’s oceans at 5 Gyres’ “More Oceans, Less Plastic” exhibit. By stirring the plastic-peppered water in the exhibit’s large glass jar, kids could observe how plastics can get caught up in ocean currents even deep in the water column.

“Our regional science and technology resources are a well-kept secret, which is unfortunate, since we have such a strong research backbone in this area,” Diederick explains. “Everyone had such great stuff going on, but there wasn’t any one thing all of us were working on together. This festival is what happened when we asked: Why aren’t we collaborating?”

Spanning the transition between temperate and subtropical zones, the Indian River Lagoon is home to an estimated 4,000 species of plants, animals and fish, including 53 threatened or endangered species. That makes it not only a vital environmental resource, but a powerful economic one. A study released in August estimated the estuary’s overall economic output at $9.9 billion, making the threats it faces from pollution, habitat degradation and declining water quality an urgent problem to solve. 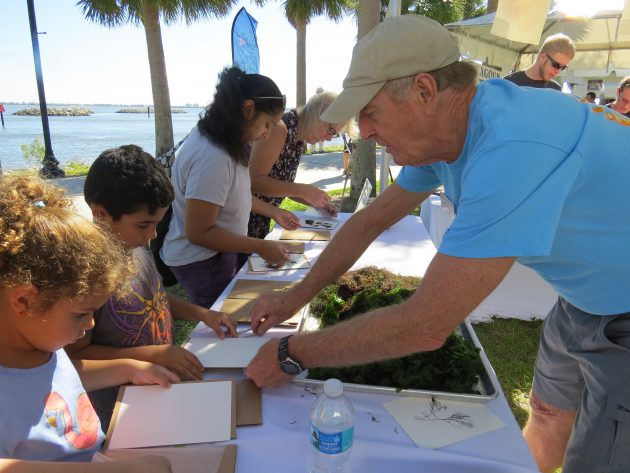 “People are really proud of and care deeply for the lagoon, but they are also concerned about it,” Diederick says.

“It’s a great chance to engage with families, and to give kids some of their first introductions to what kind of problems scientists here are tackling, and to explain what we’re doing,” said Bob Shatters, a senior research molecular biologist with the USDA’s  Horticultural Research Laboratory in Fort Pierce. His research concerns insect pests and the spread of plant pathogens, particularly citrus greening disease.

Plus, he added, it gives him and others a chance to meet and discuss one another’s work. “Innovation occurs at the edges. This has been a great opportunity to get out and talk to people in the scientific community I don’t usually get to see,” Shatters observes. 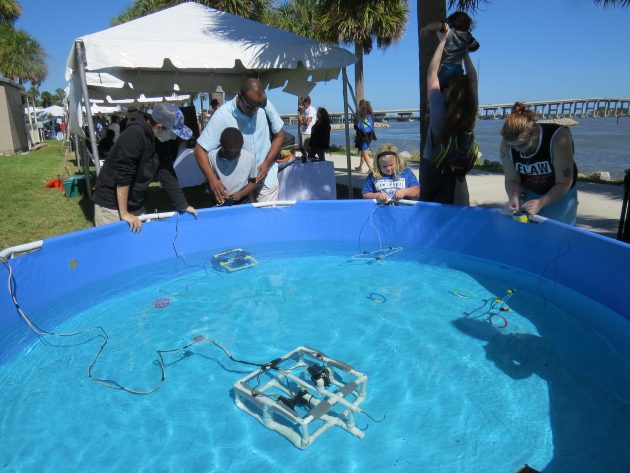 Because they found they could reach thousands of people instead of just several hundred at their own annual open house, the USDA lab now uses the science festival as their primary public outreach event for the year, says Brian Scully, director of the USDA Lab.

“We saw that the center of gravity had really started to move toward the festival, and there is always room for more proverbial cross-pollination,” Scully adds.

The festival is a resource for local science teachers looking for lesson-plan ideas and content.

“We’ve heard from numerous teachers and school district employees that they use the festival to get ideas for activities to do in class,” Diederick says. “Because every exhibit has some type of hands-on activity or take-home experiment, they’re getting tons of ideas they can implement into the classroom.” 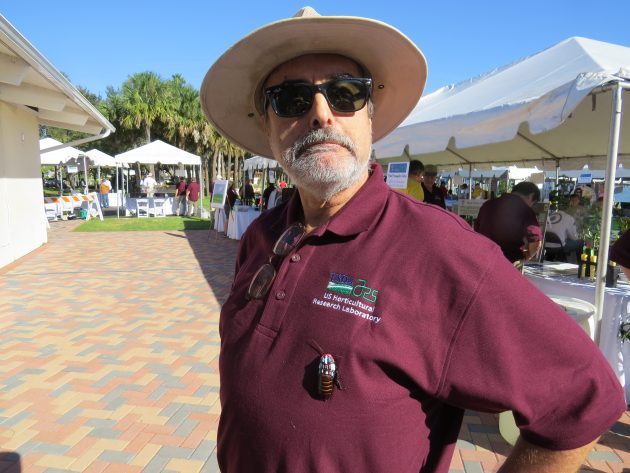 Joe Patt, a research entomologist with the USDA’s Horticultural Research Laboratory in Fort Pierce, brought giant cockroaches to show to kids at the Indian River Lagoon Science Festival. By encouraging kids to handle the roaches and picking their favorite number for races in acrylic runways, Patt says it builds kids’ familiarity with insects and their importance in the natural world.

Jill Kemp, a fourth-grade teacher in nearby Jensen Beach, brought her daughter Paisley to the science festival, who enjoyed banging the “drum kit” at the library booth.
“As an educator and a parent, I enjoyed the opportunity to expose my daughter to fun learning experiences that led to enlightening discussions about our environment,” Kemp said. “This will be on our must-do list for years to come.”

In coming years, festival organizers hope to make more classroom-ready materials available for teachers, and will also be acting as mentors for new science festivals just getting started elsewhere in the country.

“Even though this is a Smithsonian-led event, it’s truly a community-wide collaboration,” Diederick says. “People get a chance to showcase their own organization, and we are sharing science and getting people excited about it. We’re trying to change the conversation around science.”

What is now the Indian River Lagoon Science Festival started out as a much smaller event focused on estuary science, but after receiving funding from a partnership between the Alfred P. Sloan Foundation and the Science Festival Alliance, the Smithsonian Marine Station was able to broaden the focus to include a greater array of exhibitors. 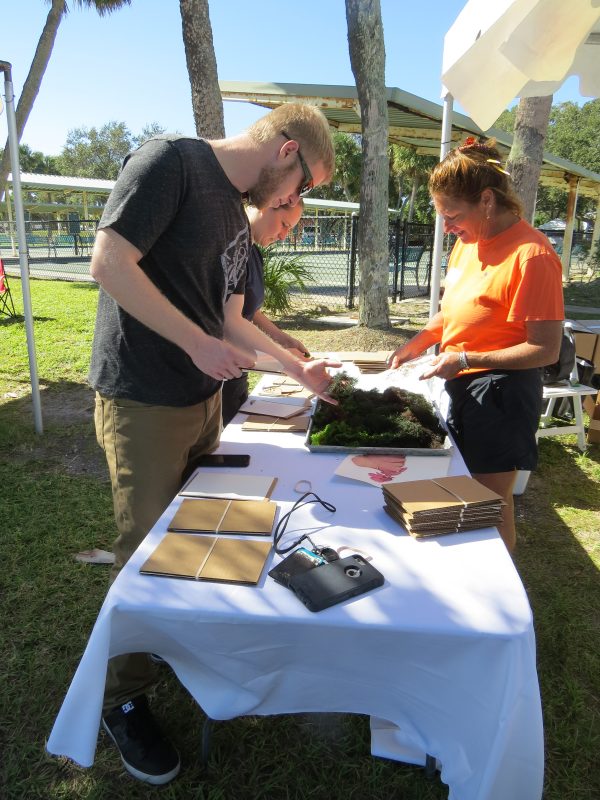 Sherry Reed, manager of the Smithsonian Marine Station, helps visitors create algae presses to take home. She prepared 600 kits in advance, which were so popular with visitors that she ran out nearly an hour before the festival’s conclusion.

“At the Harbor Branch booth, I had great conversations all day with fishermen, boaters, teachers, students, retirees, fellow scientists and people from all walks of life,” adds James Masterson, assistant professor at Florida Atlantic University and former director of the university’s Harbor Branch Oceanographic Institute Ocean Discovery Center. “The common denominator for all of us is our love of the Indian River Lagoon and our concern for its health and well-being. Every one of the thousands of attendees had that one thing in common. Having an annual event that brings us all together to celebrate the natural treasure sitting in our own back yard is truly special.”