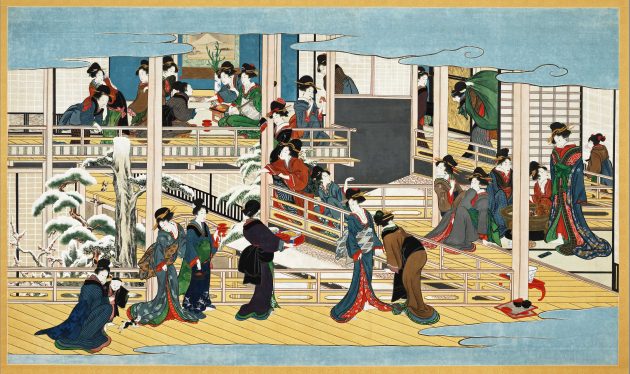 Driven by sparse biographical information and a quick assumption that Utamaro “lived as he painted,” guest curator Julie Nelson Davis points out that Utamaro’s circle fashioned him as “the ultimate bon-vivant—a man who knew women, a familiar of the demimonde.”

Soaking in the bright colors and polished beauty of Utamaro’s works on view in the exhibition, it is easy for admirers to get caught up in the illusion.

Utamaro was a master of Ukiyo-e painting, a genre that depicts the pleasures of the early Edo period’s (1603-1868) “floating world”—a network of licensed brothels, theaters and other diversions that flourished in famed Japanese districts like the Yoshiwara.

It was a competitive field, but one in which Utamaro excelled, explains Davis, an Utamaro scholar from the University of Pennsylvania.

His dazzlingly colorful paintings, prints and illustrated books are populated with kimono-clad women enjoying lush, pastoral landscapes that were idealized even as Utamaro painted them and nostalgic by the time they were first seen by Western eyes.

“No women could be so gorgeous, talented in the arts of music, calligraphy and poetry, and so gracefully comported as the women seen in his works,” observes co-curator James Ulak, Freer|Sackler senior curator of Japanese art. The cleverly designed guides to Edo’s brothels “were come-ons raised to the level of art.”

As Japan opened itself to international trade and the works reached Europe, they fed an artistic movement among painters and collectors who reveled in the beauty artists like Utamaro were able to capture, seemingly effortlessly.

“Particularly in Paris,” Ulak says, “images of Japan’s long-ago demimonde had particular resonance with the Whistlers, the Beardsleys, the Klimts and Lautrecs of the world, and other artists who chose to shadow box with modernity and to idolize and idealize a lithe, clever, gossamer female type.”

Images of inspired works by James Abbott McNeill Whistler, John Singer Sargent and Henri de Toulouse-Lautrec hang at the exhibition’s opening, where Raby says curators have “tried to contextualize [the Utamaro works] within collecting and connoisseurship at the turn of the 20th century.”

The catalyst for “Inventing Utamaro: A Japanese Masterpiece Rediscovered,” was the recent rediscovery of a massive Utamaro painting, “Snow at Fukagawa,” which is nearly 4 yards wide and depicts beautiful women lounging around an alpine resort surrounded by eerie blue clouds.

Japan’s Okada Museum in Hakone rediscovered “Snow at Fukagawa” in 2014. It had been considered lost since it was last shown for just 3 days at a department store in 1948. 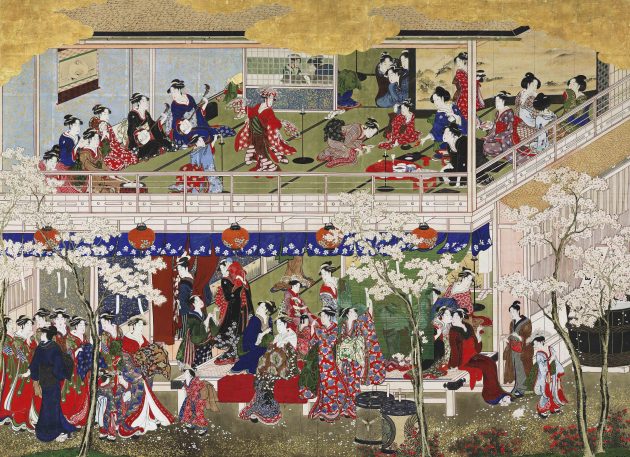 It completes a triptych of unusually large Utamaro works that depict a poetic Japanese trinity of “Snow, Moon and Flowers.” The trio of paintings reached the Paris art market in the late 1880s and were quickly dispersed. Charles Lang Freer acquired “Moonlight Revelry” at Dozo Sagami in 1903. “Cherry Blossoms at Yoshiwara” passed through several hands in France until the Wadsworth Atheneum Museum of Art in Hartford, Conn., purchased it in the late 1950s. “Snow at Fukagawa” had been missing for nearly 70 years before it resurfaced in Hakone. The three paintings have not been exhibited together since 1879, and because of the Freer’s founding statute against lending, this exhibition is the only location in the world where all three originals will be on view together.

In “Snow at Fukagawa,” one woman carries succulent fish on a laden, red earthenware tray. Another plays with a cat and child at her feet, while across a pine tree-speckled courtyard, sprinkled with snow, another plays a shamisen—the three-stringed Japanese instrument.

Nearby, a woman applies makeup while looking in a hand mirror as, off-to-the side, another totes a pile of laundry quietly offstage. What unites the women is their status as perfect models of beauty, just like the figures depicted in more typical ukiyo-e paintings and prints.

The manufactured assumption was that Utamaro himself was a part of this floating world. Davis’s research however has shown he was instead part of the establishment that promoted the pleasure districts.

Utamaro’s publishers cultivated a libertine image to improve his popularity in a crowded market, and the stories of this man “who came to be a lover of the female form” enchanted Western collectors a century after the artist’s death.

Nostalgic views of a pre-industrial Japan were as false as Utamaro’s identity by the time collectors like Freer encountered them the exhibition points out. Depictions of women in the artworks were fabricated from the outset.

The women were very clear prototypes, Davis says, with few ever individualized. Beyond that, these depictions masked a far darker reality, one addressed in the exhibition’s final gallery.

“We wanted to have a kind of homage to those women who actually worked in those quarters,” Davis explains. The exhibition leaves visitors not with paintings of the women frolicking about the floating world but a photograph of them locked in a cage.

But that is not the world of Utamaro’s magnificent paintings—a pastoral Edo populated by fantasy, nor was it the identity of Utamaro: the ultimate denizen of this ukiyo-e paradise.

“What this exhibition does is to explore the many questions surrounding not only the paintings but also the identity of Utamaro himself,” Raby adds. “At the end, I hope this exhibition will challenge some really key assumptions … about … the male gaze.”