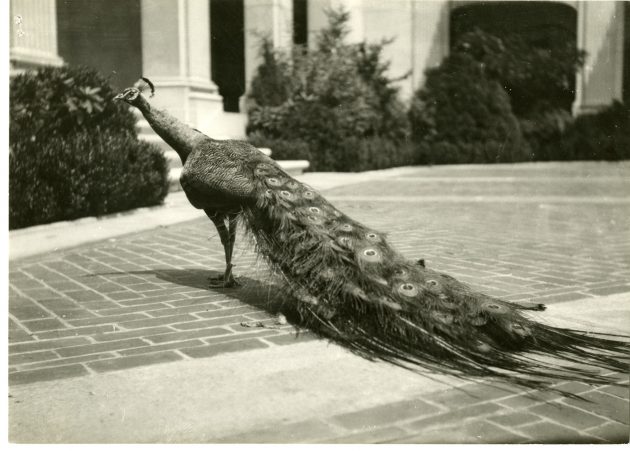 Starting in 1923, the Smithsonian’s National Zoological Park loaned three peacocks to spend the warmer months of the year in the courtyard of the Freer Gallery of Art. (Smithsonian Institution Archives photo)

The first time the Freer Gallery of Art opened in 1923, live peacocks roamed the courtyard.

The three birds resembled the décor of James McNeill Whistler’s Peacock Room, a highlight of the new Smithsonian gallery. Donated by the National Zoo, the peacocks moved back to the Zoo in the winter for safekeeping and returned to the Freer in the spring. They remained fixtures in the Freer courtyard in the 1920s. 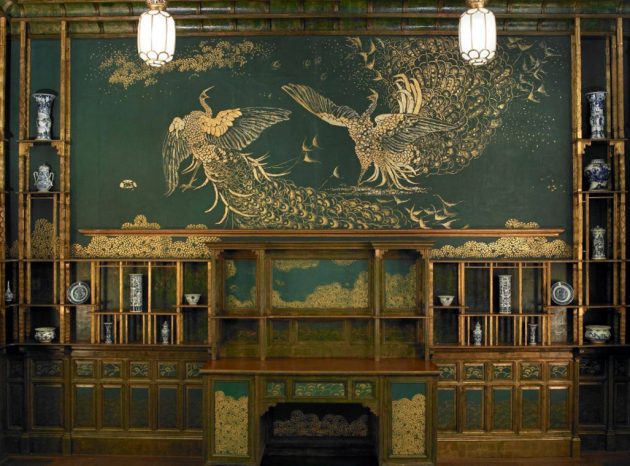 Harmony in Blue and Gold: The Peacock Room. The Peacock Room was originally the dining room in the London home of Frederick Richards Leyland (1831–1892), a wealthy shipowner from Liverpool, England, who was artist James McNeill Whistler’s leading patron. (Click photo to learn more)

Today, the Smithsonian’s Freer and Sackler Galleries together form the national museum of Asian art. Both are reopening Oct. 14 after renovations and a revitalization of their spaces.

This time around, visitors can experience where Asia meets America through reinstalled collections and four new exhibitions, along with a weekend-long festival of Asian art, food, and cultures.

As we look forward to this opening, the Smithsonian’s institutional historian Pamela Henson recounts some of the goings-on from the first opening of the Freer nearly 100 years ago: 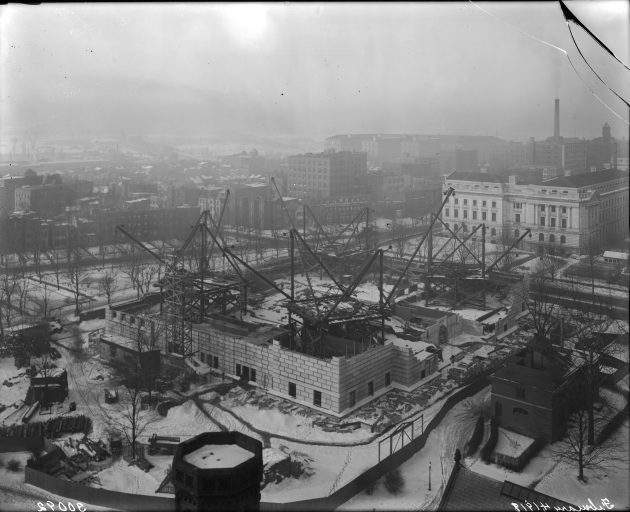 February 4, 1918. An aerial view of the construction of the Freer Gallery of Art after a snowfall. (Smithsonian Institution Archives photo)

“On May 1, 1923, the Freer Gallery of Art opened with a private viewing for President Warren G. Harding, Mrs. Florence Kling Harding, the Smithsonian Board of Regents and various cabinet members in the afternoon. The morning of May 1st, press representatives were able to view the museum.”

The next day, the museum welcomed invited guests—more than 3,000 invitations had been sent out. A circular handed to visitors reminded them that only a small portion of the collection was on view and that objects and exhibits would be changed from time to time. (This is still true!)

The Washington Post published on May 30, 1923, an article about the Peacock Room’s origin in art patron Frederick Leyland’s London home: 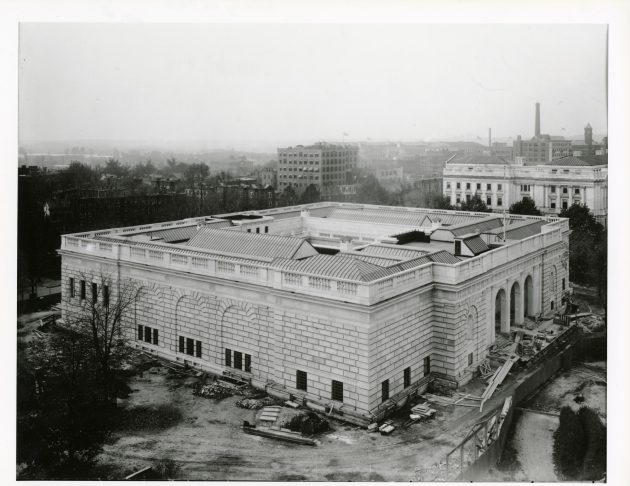 An aerial view of the north and east sides of the newly completed Freer Gallery of Art taken in the 1920s. The Department of Agriculture building at the corner of Independence and 12th Street is to the west of the Gallery. In the distance on the left, the Potomac River can be seen as can homes, other buildings, a smokestack and a clock tower. (Smithsonian Institution Archives photo)

“Now that the nation has, at last, come into actual possession and enjoyment of the Freer Gallery, every authentic scrap of information relating to the collections therein becomes of interest and importance. And it is even a duty as well as a pleasure to acquire that intimate knowledge of our treasure which shall enhance its value to us individually.”

The Peacock Room is among thousands of pieces of art Charles Lang Freer collected in his life, which include significant numbers of Chinese and Japanese works, along with objects from India, Korea, the ancient Near East and Egypt and the world’s largest collection of art by James McNeill Whistler.

A stunning animated projection will transform the Freer Gallery’s façade as the IlluminAsia festival kicks off Saturday, October 14, with a night market featuring food and art. (Click photo for more information.)

Freer gave his collection to the nation before his death in 1919. Construction started on the Freer Gallery of Art in 1916, and after a delay due to World War I, the gallery opened to the public on May 9, 1923.

Since then, the Arthur M. Sackler Gallery was founded with Dr. Arthur M. Sackler’s donation of about 1,000 works of Asian art.  It opened in 1987, and hosts changing international loan exhibitions and as well as rotating displays of objects from the collection—which you can see along with the reimagined Freer on Oct. 14.