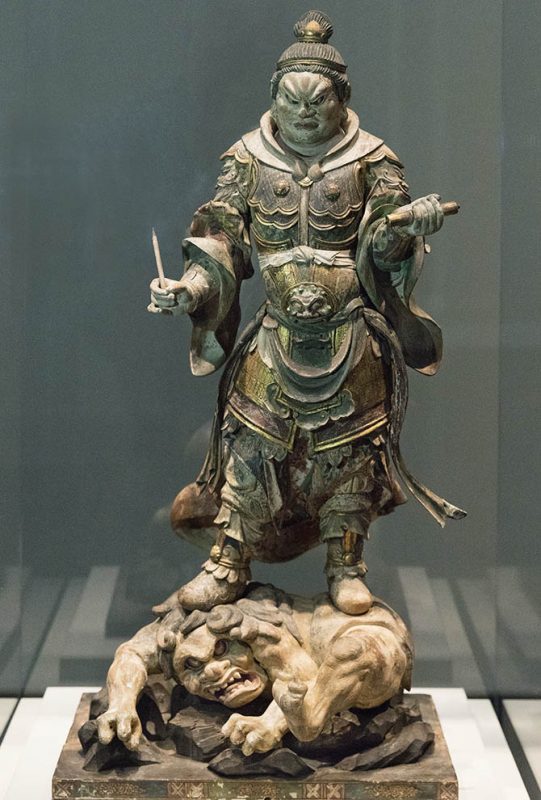 Komoku-ten, Guardian of the West

With clenched fists and grimacing lips, a grotesque demon glares up through crystal orange eyes in rage at its tormenter, Komoku-ten—one of the four Shitenno, or guardian kings of Buddhism. Balanced majestically and effortlessly atop the demon’s writhing, comically contorted body, Komoku-ten, Guardian of the West, holds in his hands a scroll and writing brush, icons of Buddhist law.

Carved in Japan between 1185 and 1333, during what is known to scholars as the Kamakura period, this exquisite wooden sculpture is one of four on view in the newly renovated Freer Gallery of Art.

They once stood together inside a temple sanctuary in Japan, symbolically protecting the Buddha at the temple’s center in each of the four cardinal directions: Tamon-ten (north), Jikoku-ten (east), Zocho-ten (south) and Komoku-ten (west). Appearing lithe and animated, each guardian has a squirming demon pinned beneath his feet, symbolizing dominance over all forces that might harm the Buddha. The sculptor’s identity is unknown.

“What is very, very interesting and important about these sculptures is that they are fine examples of a relatively new technique in which figures were put together from individually carved pieces rather than being carved from a single large wooden column, such as a tree trunk,” explains James Ulak, senior curator of Japanese Art at the Smithsonian’s Freer and Sackler Galleries. 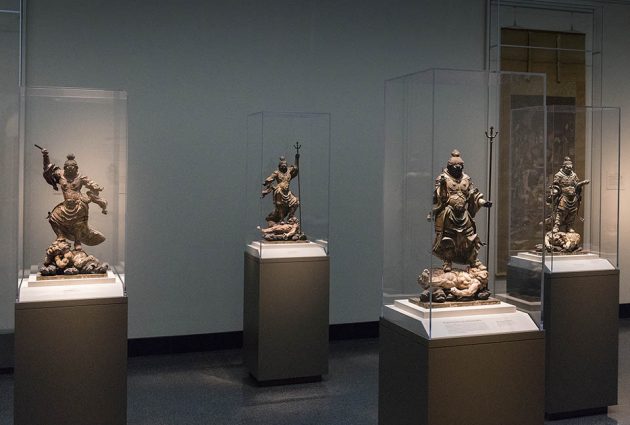 The guardians of the four directions stand in the Freer Gallery of Art as they would have within a temple sanctuary, protecting a buddha figure. Komoku-ten (west) holds a writing brush and sutra scroll. Tamon-ten (north) holds a miniature stupa in one hand and a spear in the other. Jikoku-ten (east) and Zocho-ten (south) raise their right and left arms, respectively, to provide a visual frame for the ensemble. Each figure stands on a writhing demon, symbolizing dominance over any enemies of Buddhism.

Not so with these four Shitenno, whose exaggerated postures and billowing garments capture a vivid sense of dynamic, realistic movement, characteristics that came to prominence in Japanese Buddhist sculpture in the 13th and 14th centuries.

This quest for realism was the product of apocalyptic times in Japan, which included an attempted Mongol invasion, natural calamities and plagues.

“In this tumultuous period, Japanese Buddhists turned to their faith for protection, compassion and order,” Ulak explains. In paintings and sculptures, Buddhist works reassured believers with increasingly realistic visions of compassionate protectors and fierce guardians. In sculpture, this realism was achieved through new techniques of production.

“Imagine a craftsperson with the ability to work on multiple small parts separately—a hand, a face. Much greater detail could be achieved in the round, and when the pieces were all brought together, the result from all sides was a more dramatic, almost hyper-realistic figure,” Ulak says. “Whether looking to convey compassion—such as in a Buddha figure—or the fierceness of a warrior, this new technique allowed a sculptor to make works with more detail that were more believable and approachable.” 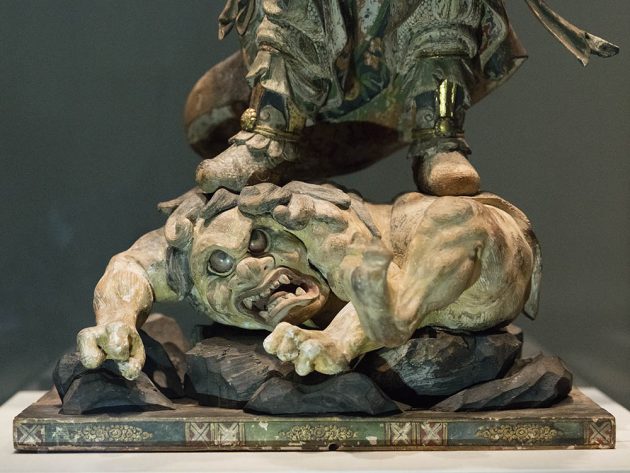 A writhing demon (detail) beneath the feet of Komoku-ten, Guardian of the West

It’s hard to imagine the four Shitenno figures on view in the Freer are made from joined pieces, Ulak says, but they are.

After the individual pieces of a sculpture were joined, the figure was covered with a lacquer-infused gauze to unify its parts. Next, it was covered with a gesso, a kind of white base paint. Finally, detailed patterns were carved on the many layers of their garments and vibrantly painted in gilt and other paint.

Unlike one-piece sculptures, these figures are hollow inside. Sacred texts were sometimes placed inside a sculpture symbolizing holy internal organs.

The eyes of both the guardians and demons are ultra-realistic. As their heads were carved in two parts, a front mask and back, the sculptor was able to work inside the mask before the head was assembled. 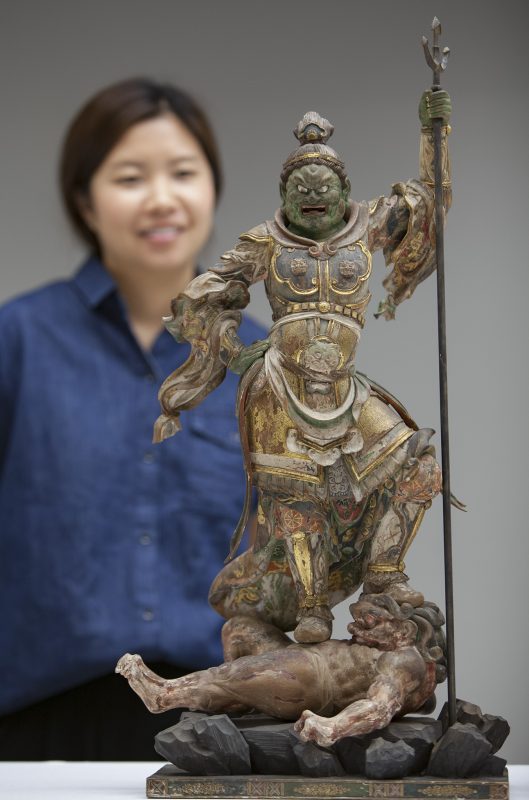 Zocho-ten, Guardian of the South

Openings were carved for the eyes and using either rounded crystal or glass, a sculptor would slightly shave one part of it flat, paint an eye onto a small piece of white paper and paste it to the back of the glass. The eye would then be popped in from the back of the mask and secured with bamboo nails, so what you have is a little eyeball showing in front.

“It’s a complicated process but the end result is hyper-dramatic,” Ulak says “The gleam from their crystal inlaid eyes enhances their lifelike, deeply furrowed facial contortions. If you imagine these statues in the period they were created with no electricity but ambient light and occasionally candlelight, the effect of these eyes were really quite amazing.”

As early as the sixth century, the four guardian kings were depicted in Japanese Buddhist art, their importance derived from a belief that they watched over the world, each guarding a different direction from Mount Sumeru, the peak at the center of the world and the heavens. For centuries the four guardians have been depicted widely in various sizes, from more than double human size to the smaller forms represented in these sculptures. 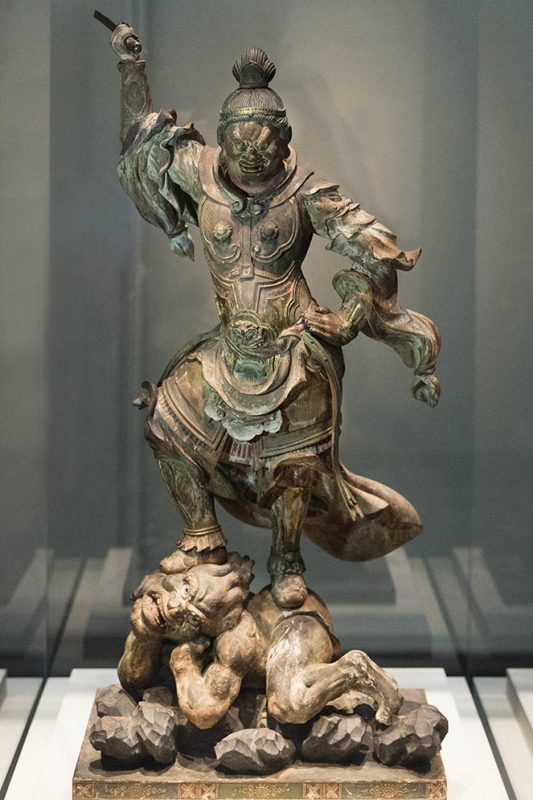 Jikoku-ten, Guardian of the East

These, Ulak says, “were probably created for a more private aristocratic chapel or abbot’s temple. The scale says refinement and a high degree of benefaction by someone.” Although their garments seem to evolve from a central Asian or Chinese warrior model, these Shitenno are not warriors like samurai, but guardians. They do not go out to battle so much as remain in the temple to protect.

In the temple, these four guardians would probably have been arranged in a mandala, a geometric representation of a spiritual concept, and viewed together from the front as a logical, dynamic composition.

Demonic figures are seen all through Buddhist art, not just Japanese but in art in central Asia, China and Korea, Ulak adds.

“They appear in abundance in paintings, particularly paintings depicting hell, and are usually animated. What struck me in looking at these demons is how they resemble certain gargoyles you see in European cathedrals during roughly the same period. This is not to imply there is any connection between these representations of wicked forms,” he says. 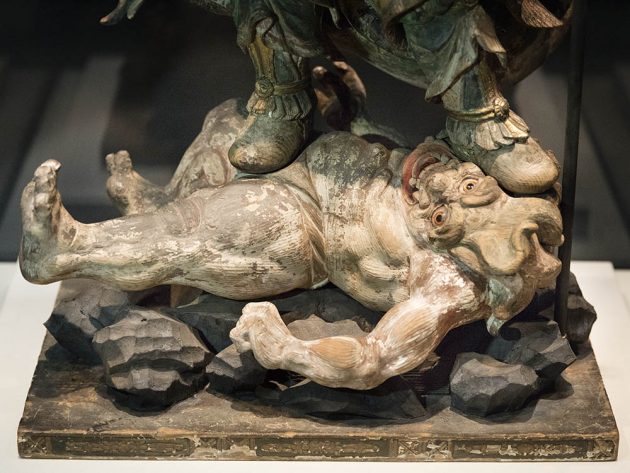 Writhing demon (detail) beneath the feet of Tamon-ten, Guardian of the North

Ulak believes these four Shitenno figures left their temple around 1868, when Japan was industrializing and its new constitutional monarchy began a formal, concentrated persecution of Buddhism.

“Because of high taxation on temples and so forth, the temples were forced to sell off their artworks,” he says “This is how a lot of these collections came to the West and also to important industrialist collectors in Japan.”

Industrialist and noted collector Yasuda Zenjirō, who was the great-grandfather of Japanese artist and singer Yoko Ono, had these Shitenno figures in his collection when he was assassinated in 1921. Harold Stern, a Japan specialist and former director of the Freer, acquired them for the Smithsonian in 1977.

Despite the fact that their bright pigments and gilt have faded significantly over the centuries, these four guardians of the law of the Buddha and their accompanying demons are among the most vibrant figures to greet visitors in the newly renovated and reopened Freer Gallery of Art. They are located in Gallery 8, in the exhibit “In the Shadow of an Apocalypse: Buddhist Art in Japan.”

Guardians of more than a galaxy